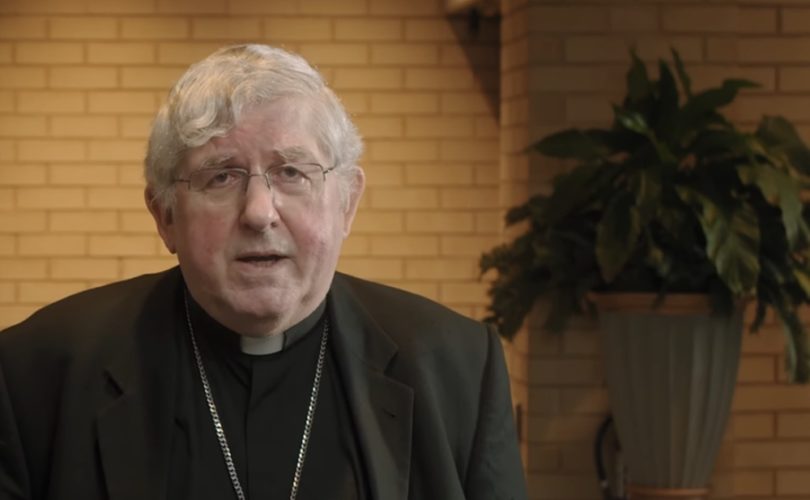 TORONTO, Ontario, March 16, 2021 (LifeSiteNews) – The Archdiocese of Toronto, where Thomas Cardinal Collins is Archbishop, has come to the defense of a Catholic father who is under police investigation over allegations that he committed a “hate” crime for asking a Catholic school board not to recognize “Pride month” or fly the rainbow flag at Catholic schools.

The Archdiocese said in a statement emailed to LifeSiteNews (read full statement below) that a review of the transcript of the father’s presentation at a Toronto Catholic District School Board (TCDSB) meeting earlier this month showed that the father “correctly” stated Catholic teaching when it comes to homosexuality.

“He suggested the help the sacraments offer to all who are struggling. Mr. Maillet reminded the trustees of their responsibility not to cause spiritual harm to the young people entrusted to their care, and referred to words in the bible where Jesus uses a powerful image concerning people who are in a position of responsibility for young people,” the statement continued.

The Archdiocese in its statement was referring to a March 4 meeting at the TCDSB where Jody Maillet, a part-time university instructor, related that he was “concerned” about a proposal to “recognize or celebrate gay pride month and fly the gay pride flag over our Toronto schools.”

“I oppose this, and I ask that you do as well,” said Maillet at the regular meeting of the “Student Achievement and Well-Being Catholic Education Human Resources” committee.

“The reason why is simple: Because gay pride is not compatible with the Catholic faith. You have a spiritual and moral duty to ensure a compassionate, caring, and loving Catholic environment at our schools,” the father, who has two children attending a TCDSB school, said.

Maillet went on to quote what the Catholic Church teaches about homosexuality. “The Catechism of the Catholic Church addresses this with three simple paragraphs. Paragraph 2358 says that we must accept the person with ‘respect, compassion, and sensitivity,’” he said. “This is true of course. I’ve seen this section used by lobbyists without quoting its sister paragraphs, 2357 and 2359,” he added.

Maillet told the board that groups who support such relationships have no place in Catholic schools. “Groups that promote gay pride month and fly the gay pride flag by their nature support these relationships. Sending up gay pride flags and recognizing gay pride month are a sign that their message holds a place in our schools and that their message is not to be contradicted. Flags are flown by those who hold control. Sending signals that support gay pride messages is contrary to the teachings of the Church and have no place in our schools,” he said.

He went on to tell the board that paragraph 2359 of the Catechism “points the way” for how Catholic schools should care for students who experience same-sex attraction. “Chastity, self-mastery, prayer, and sacramental grace – basically the Eucharist and going to confession,” Maillet said.

Maillet concluded his presentation by quoting Jesus’ warning in the Gospel of Matthew to adults who scandalize children, causing them to fall.

LGBT activists misread in Mr. Maillet’s concluding words a call for the death of LGBT allies. Pro-LGBT Toronto city councilor Kristyn Wong-Tam even went as far as tweeting on March 5 that Maillet had called for LGBT allies to be “killed by drowning.” LGBT activists and allies immediately started an online campaign against Maillet, accusing him of “homophobia.” Social media messages on Twitter reveal that they reached out to the police and asked for an investigation.

The Archdiocese said that Maillet’s “remarks and the context of his statement have been widely misquoted or taken out of context.”

“Clearly, some people, perhaps unfamiliar with the Gospel, misunderstood the reference. It is simply incorrect to link the bible verse quoted to any suggestion of violence against the homosexual community,” it stated.

The Toronto Police Service confirmed to LifeSiteNews last week that an investigation of Maillet is underway. In an additional statement to LifeSiteNews on Friday, published here for the first time today, the police stated that the case going forward will first “require the consent of the Attorney General’s office, if charges are deemed appropriate.”

Full statement from the Archdiocese of Toronto re: Jody Maillet

“Learning that remarks at a recent meeting of the Toronto Catholic District School Board by a Catholic parent, Mr. Maillet, have caused criticism, the Archdiocese of Toronto has reviewed a transcript of Mr. Maillet’s presentation. His remarks and the context of his statement have been widely misquoted or taken out of context.

In fact, Mr. Maillet correctly expressed Catholic moral teaching, quoting the Catechism of the Catholic Church. He suggested the help the sacraments offer to all who are struggling. Mr. Maillet reminded the trustees of their responsibility not to cause spiritual harm to the young people entrusted to their care, and referred to words in the bible where Jesus uses a powerful image concerning people who are in a position of responsibility for young people. Clearly, some people, perhaps unfamiliar with the Gospel, misunderstood the reference. It is simply incorrect to link the bible verse quoted to any suggestion of violence against the homosexual community.”