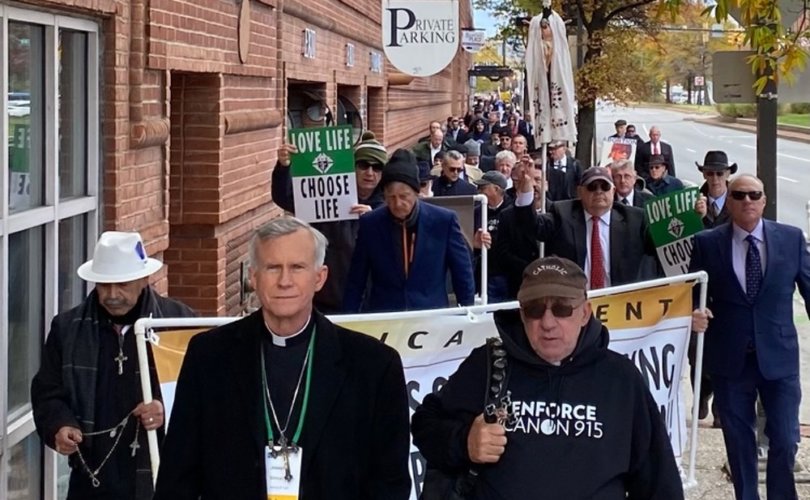 (LifeSiteNews) — The National Men’s March to Abolish Abortion and Rally for Personhood is hoping for big crowds at its upcoming event in Boston, Massachusetts, despite the Archdiocese of Boston’s decision not to endorse or promote the pro-life demonstration.

The Men’s March, which held its first rally in Washington, D.C. last June, will bring Catholic men together in defense of the lives of the preborn in Boston on October 15. The Boston rally will be the up-and-coming organization’s second event this year, following its march in Tallahassee, Florida in June, 2022. Another march is set to take place in Baltimore, Maryland in November.

Founded in 2021 by Catholic radio host Jim Havens and prominent pro-life priest Father Stephen Imbarrato, the marches are meant to bring about a total end of legal abortion in the United States.

According to Havens, The Men’s March “is an initiative that Almighty God has stirred up in our time to combat the government-sanctioned, government-funded, government-protected, ongoing, daily mass murder of the preborn and grave exploitation of pregnant moms in need by the lie of abortion.”

WATCH: Hundreds gather for first ever Men’s March against abortion in DC

Rally participants are called to “repent and be men of God.” Women and children are invited to join the rallies at the conclusion of the marches.

The pro-life Catholic group suffered a setback last month when the Archdiocese of Boston declined to publish advertisements promoting the upcoming event.

Men’s March co-founder Jim Havens reached out to the Archdiocese on August 13 to request the Boston Archdiocese’s Cardinal Sean O’Malley’s assistance in promoting the event.

Havens told LifeSite he received no immediate reply. However, he obtained an August 16 letter sent out to priests and parishes which noted that the Archdiocese had already made a commitment to support the annual March for Life in Washington, D.C. in January, and would not endorse any other marches.

“Parishes and schools may be approached to publicize or support other marches, but these will not be endorsed by the Archdiocese, nor should they be supported by its institutions,” the letter shared with LifeSiteNews read.

On August 25, an Archdiocesan spokesperson responded to Havens to affirm that while they “share a universal commitment to end abortion and to promote life,” the Archdiocese would “focus its limited resources and its efforts coordinating with parishes, schools, and ministries” to exclusively attend the January March.

Last week, a Men’s March supporter also reached out to the Archdiocese’s official newspaper The Pilot to ask them to advertise their event.

In an email obtained by LifeSiteNews, however, the outlet’s advertising manager said the newspaper would not run the ad.

LifeSiteNews reached out to The Pilot and the Archdiocese for further comment but has not heard back.

On Wednesday, Havens told LifeSite it was “[v]ery disappointing to hear this news, but it’s just another example for why the National Men’s March to Abolish Abortion and Rally for Personhood is needed…”

“[W]e need leadership from the grassroots, beginning with the men, to face the reality of the ongoing, daily mass murder of the preborn, take responsibility for our duty to rightly respond, repent of what we have and/or have not done, and resolve to do more to push on with urgency to Constitutional personhood for our preborn brothers and sisters,” he said.

“Evil triumphs when good people do nothing, and we need all good people to make plans now to join us in Boston on 10/15 to peacefully, lovingly, courageously, stand up for the least of these (Mt. 25:40, 45) and against the evil that is dehumanizing and murdering children by the thousands every day in our nation as well as exploiting many vulnerable pregnant moms in need,” Havens continued.

The Men’s March co-founder told LifeSite the “evil” of abortion “must be stopped and it has come down to the good people in the grassroots to rise up in authentic love to do so.”

“By God’s grace, let’s overcome all obstacles and unite in Boston on 10/15,” he said, directing those interested in supporting The Men’s March to visit www.themensmarch.com to participate and donate.

Following the Archdiocese’s decision not to promote the Men’s March, a supporter has arranged for the conservative Boston Broadside to run a full-page ad promoting the event instead.