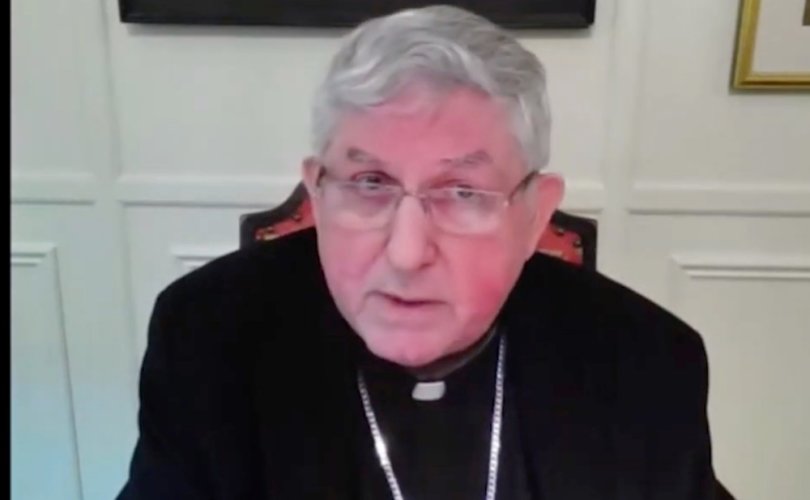 TORONTO (LifeSiteNews) — Cardinal Thomas Collins and the Archdiocese of Toronto issued two memos to all employees and clergy on Friday informing them of a new mandate that will require everyone to be fully vaccinated or be subject to weekly testing.

“Beginning on October 8, 2021, we will require that all clergy (bishops, priests, deacons) be fully vaccinated against COVID-19 or provide regular proof of a recent negative COVID-19 test result in order to perform their duties,” the memo reads.

“If an employee does not comply with this policy, or is found to have submitted fraudulent proof of vaccination, a fraudulent test result, a fraudulent summary, or fraudulent documentation in support of an accommodation request, they may be subject to discipline (which includes being placed on an unpaid leave of absence), up to and including termination of employment for just cause,” it continues.

The recent mandate also subjects volunteers and all lay employees to the same vaccination or testing requirements, including but not limited to parish staff, lectors, choir members, and ushers.

If a person opts for testing, the memo states that they will be forced to pay for the weekly testing out of pocket at a fee of “about $40/test.”

The memo claims that the archdiocese “will accommodate individuals who are unable to comply with this policy on the basis of a protected human rights ground to the extent required under human rights legislation.”

However, last month the Archdiocese of Toronto released another memo telling clergy they are not to sign any letters of religious exemption regarding the COVID-19 vaccines, despite its connection to abortion.

The injections, which all have connections to fetal cell lines that were sourced from aborted children, are a cause of moral apprehension for many faithful Catholics and high-ranking clergy alike.

Bishop Athanasius Schneider of Kazakhstan has gone as far as providing affidavits for any Catholics who want to oppose mandatory vaccinations on religious grounds.

Another high-ranking clergyman, Cardinal Raymond Burke, also told the faithful, “It must be clear that it is never morally justified to develop a vaccine through the use of the cell lines of aborted fetuses.”

Further, the National Catholic Bioethics Center (NCBC) has laid out four points, referencing authentic Church teaching, that outline how and why Catholics can reject mandatory vaccinations in good conscience:

On the legal front, constitutional lawyer Rocco Galati has repeatedly stated that mandatory vaccinations and mandatory testing are violations of Canadian law, per the Bill of Rights, the Canadian Charter of Rights and Freedoms, the Privacy Act, as well as the Criminal Code of Canada.

Specifically, under the Genetic Non-Discrimination Act of the Criminal Code of Canada:

5 It is prohibited for any person who is engaged in an activity described in any of paragraphs 3(1)(a) to (c) in respect of an individual to collect, use or disclose the results of a genetic test of the individual without the individual’s written consent.

In an attached letter to the memo, written by Collins, he tells the people under his purview, “We must get beyond this pandemic, which has directly and indirectly caused such misery for so many, and has impeded our life as a Christian community. The single best way to do that is for people to get vaccinated.”

A long-standing employee of the archdiocese, who wishes to remain anonymous at this time, offered a comment to LifeSite about the coercive directive announced today.

“[I’m] not at all surprised. I could see this coming. They [the Archdiocese] are beholden to the government,” she said.

“Where will this end? The fear is, eventually, churches will only be open to the vaccinated,” she added.

The employee also told LifeSite that she has received multiple calls from faithful Catholics over the past month expressing a feeling of betrayal from the Archdiocese, per their policy to deny the faithful religious exemptions.

“The only thing that is keeping me going is the love of the Eucharist, and knowing God wins,” the employee concluded.

LifeSite has reached out to the Archdiocese of Toronto for a comment but has yet to receive a reply.