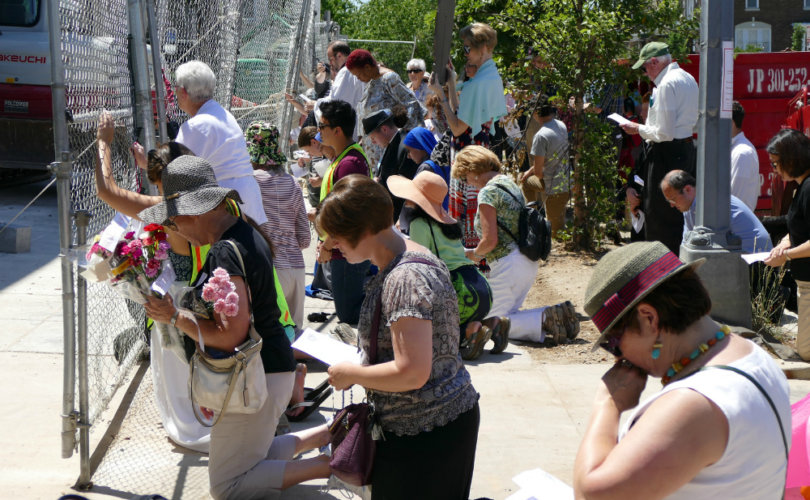 WASHINGTON, D.C., June 22, 2016 (LifeSiteNews)— The nation is facing a great period of secularization that calls for repentance, a well-known priest and blogger told roughly 100 people at a pro-life Mass and rosary procession to the construction site of a new Planned Parenthood in the nation’s capital on Saturday.

The Roman Catholic Archdiocese of Washington sponsored the Mass, which took place at Holy Name of Jesus parish, and the prayer procession to the site of an abortion facility Planned Parenthood has boasted will be its “flagship” center when its construction is completed.

The abortion facility Planned Parenthood is building in Northeast DC is right next to Two Rivers Public Charter School. The school is suing several pro-life advocates for protesting the facility’s construction.

Planned Parenthood originally claimed the facility would open at the end of 2015, but its building is still incomplete.

Before the Mass, the archdiocese collected baby items for the Capitol Hill Pregnancy Center in the Papal Fiat, the car in which Pope Francis rode during his September 2015 visit to the United States.

Monsignor Charles Pope, the pastor of Holy Comforter-Saint Cyprian parish in Washington and a prolific blogger for the Archdiocese of Washington, warned the faithful of the need for repentance for the scourge of abortion in a secularized America that has forgotten God.

Monsignor Pope compared the United States to the nations of the Old Testament, which were “blessed by God and called to manifest His glory,” yet embraced sin and fell into captivity and dissolution as a result.

Monsignor Pope said it is not the unfairness of God’s law, but human weakness and sinfulness, that causes lifelong marriage and chastity to seem unrealistic.

One of the reasons those who defend life and marriage are seen as harsh and bigoted by the other side is because when people are used to darkness, the light seems harsh, he said.

A written version of Monsignor Pope’s homily can be read here.