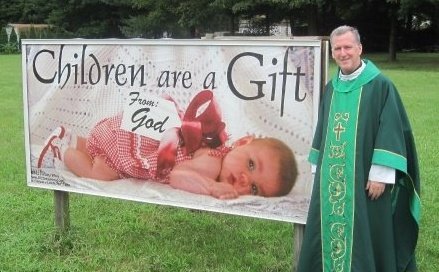 Father Peter West is a vocal supporter of Catholic moral teaching on life and marriage. He also has opinions on matters of prudential judgment within Catholic teaching.Fr. West Facebook page

NEWARK, New Jersey, February 9, 2017 (LifeSiteNews) – The Archdiocese of Newark says it will crack down on an outspoken pro-life priest after a hit piece on a local news site against him.

On Wednesday, NJ.com published a scathing article about posts made by Father Peter West on his Facebook page.

The article says West “has repeatedly railed against Muslims,” voiced “strong support for the president's travel ban” and “assailed millennials as 'snowflakes',” among other accusations.

The article suggested the priest has violated the Johnson Amendment by being so political on Facebook and worried that West's “withering attacks … run counter to the statements and philosophies of his own leader, Newark Cardinal Joseph W. Tobin, and his ultimate boss, Pope Francis.”

James Goodness, a spokesperson for the Archdiocese of Newark, told NJ.com that the archdiocese is “concerned about Father West's comments and actions, and will be addressing them according to the protocols of the Church.”

“This is an ongoing matter, so I am not sure when I will be in a position to speak on it again,” Goodness told LifeSiteNews in an email response to the questions.

West, who previously worked for Human Life International and Priests for Life, told LifeSiteNews that the article completely misrepresents him.

“It has half-truths, distortions of the truth, and I would say outright lies in it,” he said. For example, the article claims “that I called all millennials snowflakes, which is not true. I think that anyone who is seeking safe spaces and can’t stand to hear contrary opinions is a snowflake no matter what their age.”

The article also accuses West of having shared a post on Facebook “that challenged Obama's authenticity as an African-American because he wasn't raised by a poor single mother in the inner city.”

He said the article's misrepresentation of him as racist “troubles me” because he ministers to many African-Americans at his parish. The article doesn't mention the full context of West's post.

West is also vocally supportive of Catholic moral teaching on his social media. He has 8,494 Facebook followers. More than 200 people have signed a recently-launched petition asking the Archdiocese to condemn the “false, inaccurate” hit piece on him.

West said his posts about radical Islam were made “on what you might say are feminist grounds.”

He said he was troubled by “the fact that they don’t treat women as equals, that one man can have up to four [wives], that a woman is treated as an article of property, that in many of these Muslim countries, they practice female genital mutilation.”

“I have met and have had positive interactions with some Islamic people … people who are of goodwill,” said West.

“I’m not dissenting from any teaching of the Church,” said West. “I consider myself a faithful Catholic. I may have some opinions that diverge from that of some of the bishops. I have promised in the future that I’m not going to take a position on anything that’s contrary to the stated positions of my ordinary.”

Archbishop Joseph Tobin was promoted by Pope Francis to the position of Newark in November.

Tobin has criticized those seeking moral clarity on Pope Francis' apostolic exhortation Amoris Laetitia. At the U.S. Bishops' 2016 meeting, Tobin worried that its new strategic plan might not focus enough on “the magisterial teaching of Pope Francis on the care for creation.”

West stressed that he respects and “will be obedient” to Tobin and from now on will not be posting items on social media that are different from Tobin's publicly stated positions on various matters.

He also told LifeSiteNews that he would make efforts to keep his online presence above reproach.

“If I have sometimes been intemperate in the terms in my use of social media and have expressed a lack of charity toward someone, I apologize for that,” said West.

The NJ.com article had criticized the priest for writing in a post that an unnamed person is a “totalitarian jerk.” West explained that a person he did not identify by name posted on his Facebook page that he was going to complain about West “and he can’t wait until I am shut down, my voice is silenced.”

“Should I be more temperate with regard to using such language? Yes, I do believe so,” said West. “But [there are] a lot of priests I know who are calling Trump a lot worse. They’re calling him a Nazi and all sorts of things.”

“I don’t think she should be convicted without a trial,” he explained.

Supporters of Fr. West are pointing out that the pro-life priest is not the only priest in the diocese expressing controversial political opinions on social media.

Father Alexander Santora, also serving the Archdiocese of Newark, tweeted in October that Donald Trump needs to be “restrained and committed.” He suggested Trump has a “learning disability.”

Santora also has tweeted that he is “ever a Democrat.”

Santora is a frequent contributer to NJ.com, the same publication that ran the piece criticizing Fr. West. In one article, Santora praised Jesuit Father John J. McNeill, the founder of the dissident “gay” Catholic movement. In another, he seemingly suggested a Catholic might be able to vote for a pro-abortion candidate.

Under the previous Newark Archbishop John Myers, a priest was suspended from ministry after he announced that he is openly homosexual and began campaigning for the LGBT cause.

The Archdiocese of Newark's Facebook page is located here.