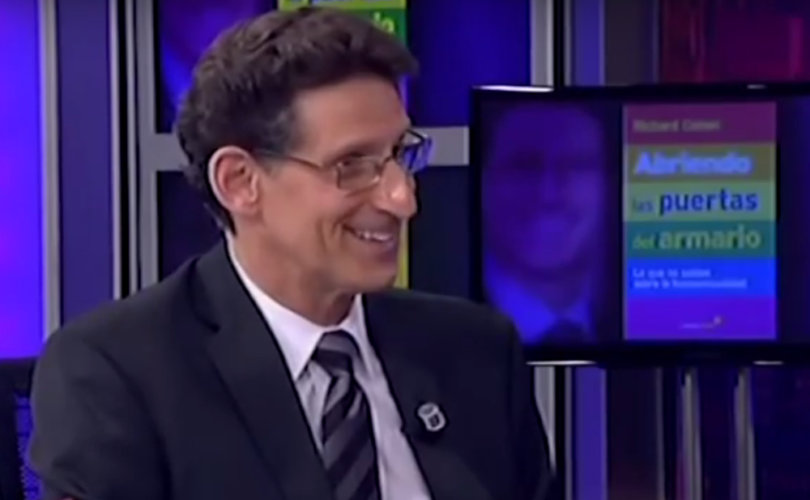 September 30, 2016 (LifeSiteNews) – The Archdiocese of Mexico has kindled the ire of the country’s “discrimination” police after publishing an interview with psychologist Richard Cohen, who recounts his conversion from homosexuality to heterosexuality as well as his subsequent career as a therapist for those suffering from same-sex attraction.

In an article entitled “People aren’t born homosexual,” the archdiocesan weekly newspaper Desde la fe (From the Faith) writes that homosexuality is “reversible” and quotes Cohen stating that his own homosexuality was caused by the disordered relationships he experienced with his parents and siblings.

“There was a lack of unity with my father and an excessive attachment with my mother; there was physical abuse on the part of my older brother and sexual abuse by my uncle, but among the most important things was that I had a hypersensitive temperament,” Cohen told Desde la fe.

“If there were anything genetic or biological in homosexuality, it would be hypersensitivity; hypersensitive boys and girls can easily be injured,” Cohen told the newspaper. “Boys are often injured by the aloofness of their fathers and girls by that of their mothers. It might be a true distancing or by way of a false interpretation, but this perception is transformed into their reality, and it is highly probable that they will seek that unrequited love in the arms of a person of the same sex.”

However, Cohen began to develop a sense of masculine identity and opposite-sex attraction after receiving the acceptance and affirmation of heterosexual male friends. “I then felt a calling from God to get a master’s degree in psychology and to help others to overcome same-sex attraction,” he told Desde la fe. The newspaper notes that Cohen claims to have helped thousands of homosexuals abandon the lifestyle and to have trained trained thousands of therapists to do the same for their patients.

The article, which contradicts fundamental precepts of homosexual ideology, drew the attention of Mexico City’s ultra-leftist Council to Prevent and Eliminate Discrimination (COPRED), which sent a warning letter to the editorial board of Desde la fe, which “reminded … Desde la fe of the obligation of the authorities to guarantee to all persons the enjoyment of fundamental rights without any discrimination,” and warned the president of the board, Fr. Hugo Valdemar, “in a not very conciliatory tone, the intention of COPRED to censure and sanction any opinion that might create a climate of intolerance, defamation, and homophobia against the lesbian, gay, bisexual, and trans community of the nation’s capital,” according to the newspaper.

Fr. Valdemar has responded to the letter by accusing COPRED of “mutilating” the text of the article in quoting it selectively and notes that the homosexualist Yogyakarta Principles, which COPRED cited in its letter, have no juridical status and are not binding on Mexico in any treaty.

The Yogyakarta Principles “do not have an international consensus, nor is part of political or juridical agreements, and lacks legitimacy in that it undermines democratic structures by way of a divisive influence that favors ideologies over systems of particular law,” Valdemar wrote in an open letter published on the newspaper’s website.

So far, no response from COPRED has been announced.

COPRED’s threatening letter is the second time that Catholic clergy have come under fire from Mexico’s anti-discrimination authorities in recent months.

As LifeSiteNews reported earlier, the bishop of Cuernavaca, Ramón Castro, has been placed under investigation by COPRED’s national counterpart, the National Council for the Prevention of Discrimination, at the behest of a homosexual group for repeatedly opposing the gay agenda in the state of Morelos.

“If I go to prison, no problem, I’ll do the work of evangelization there,” Castro told his flock during a sermon at the cathedral in mid-August.