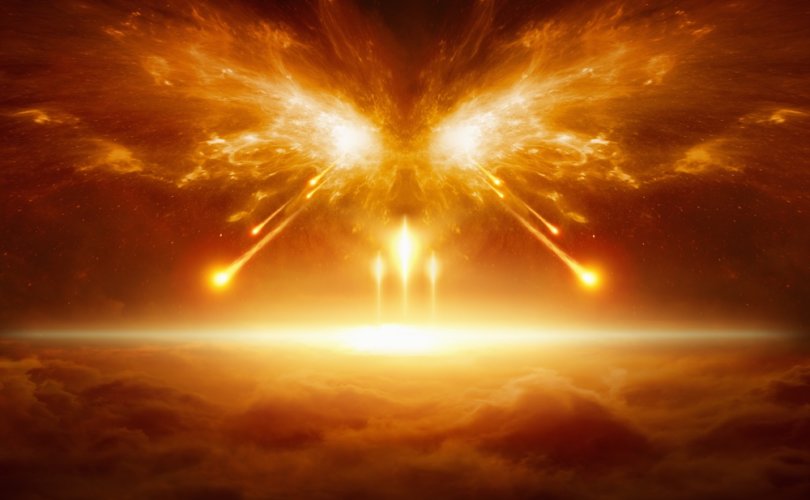 December 11, 2018 (LifeSiteNews.com) – A group of archeologists and other scientists say they have discovered strong evidence that the region of the “Middle Ghor,” where the cities of Sodom and Gomorrah are believed to have existed, were in fact destroyed by a meteor that exploded in the sky above, raining down superheated matter and raising temperatures to thousands of degrees, a theory that matches the account of the cities’ destruction contained in the Old Testament Book of Genesis.

According to the theory, the meteor exploded at low altitude with the force of a ten megaton atomic bomb at an altitude of about one kilometer over the northeast corner of the Dead Sea, and obliterated all of civilization in the 25-kilometer-wide circular plain that constitutes the “Middle Ghor.”

The researchers presented preliminary findings on the subject at this year’s annual meeting of the American Schools of Oriental Research in November, and have been developing the theory since at least 2015. They state that the evidence from radiocarbon dating indicates that a group of civilizations flourished in the area for over two millennia, until approximately 1700 BC, when the mud-brick walls of the buildings in the region simultaneously disappeared and only the stone foundations remained.

At the same time, the pottery in the settlements was heated into glass in the space of milliseconds, according to the results of an analysis of the Zircon crystals formed in the process, indicating that they were briefly exposed to temperatures of approximately 4000 to 12000 degrees Celsius, comparable to the temperature of the surface of the sun.

The explosion rained down platinum as well as molten lava on the region, according to two of the archeologists, and this further confirms that a meteor was the source, given that platinum is found in higher concentrations in meteors than on earth.

Approximately 40,000 to 60,000 people living in the region were killed, and a 500-square kilometer area was rendered uninhabitable for 600 to 700 years, the researchers estimate. They believe that the area was stripped of its topsoil, and that salts from the nearby Dead Sea were spread over the land, destroying its fertility.

The settlements that were annihilated in the event include the principal excavation site, “Tall el-Hammam,” which the archeologists believe is the city of Sodom, whose destruction is recounted in the Book of Genesis, chapter 19. The approximate date of the annihilation also matches the time period corresponding to the event in Genesis, according to archeologists.

Close correlation with the Book of Genesis, chapter 19

Two archeologists involved in the Tall el-Hammam Excavation Project, Steven Collins and Phillip Silvia, wrote in a 2015 conference paper that “the physical evidence from Tall el-Hammam and neighboring sites exhibit signs of a highly destructive concussive and thermal event that one might expect from what is described in Genesis 19.”

“The soil/ash samples gathered from Tall el-Hammam contain evidence of top-soil destruction and sub-soil contamination with Dead Sea salts that would have prevented the cultivation of crops for many centuries following the event, which explains (in part, at least) the long occupational hiatus,” they add.

According to the nineteenth chapter of the Book of Genesis, verse 24, “The Lord rained upon Sodom and Gomorrah brimstone and fire from the Lord out of heaven,” a statement that matches well the high temperatures and superheated stones that would have rained from the sky in such an event.

The Hebrew word for “brimstone” is normally applied to sulfur, which is a stone that burns.

Genesis 19 also seems to describe the general devastation in the region, including the loss of plant life discovered by the archeologists, stating in verse 25, “And he destroyed these cities, and all the country about, all the inhabitants of the cities, and all things that spring from the earth.”

“The country about” is the Hebrew word “hakkikkar,” which refers to a plain seated between mountains, or a valley. Archeologists believe this area to be the Middle Ghor.

Genesis adds that Abraham “looked towards Sodom and Gomorrah, and the whole land of that country: and he saw the ashes rise up from the earth as the smoke of a furnace.”

Genesis and other books of the Bible state that Sodom was destroyed in retribution for the sexual perversion of the inhabitants, particularly their desire for sexual relations with the same sex, which the Scripture calls an “abomination.”

The New Testament Letter of Jude likens fires that destroyed Sodom and Gomorrah to the “eternal fire” of hell.

“Sodom and Gomorrah, and the neighboring cities…having given themselves to fornication, and going after other flesh, were made an example, suffering the punishment of eternal fire,” the letter states in chapter one.