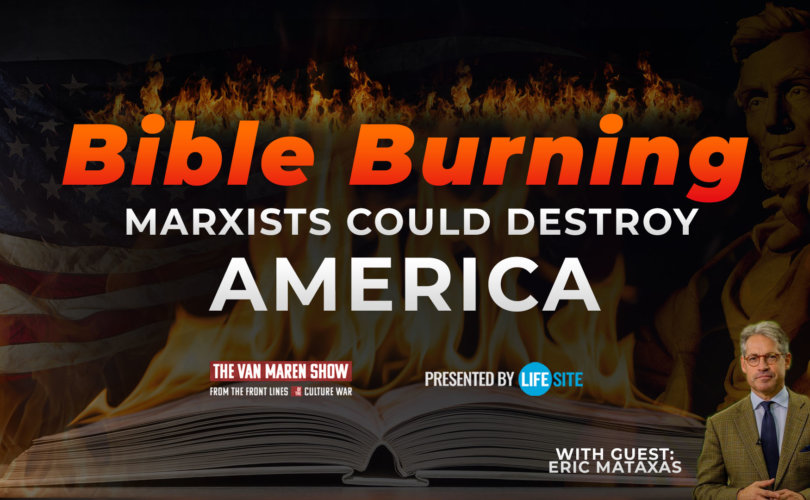 August 12, 2020 (LifeSiteNews) — Although the riots are dying out across the country, rioters in Portland are still going strong and recently started burning Bibles. Conservative author, speaker, and radio host Eric Metaxas says that in a way, this is good because it exposes the true values of the Black Lives Matter (BLM) and Antifa movements.

“I’m very glad they’re burning Bibles because we can see very clearly what the agenda is behind the BLM/ANTIFA movement. These people are cultural Marxists,” Metaxas says.

In this week’s episode of The Van Maren Show, Metaxas and Van Maren discuss the riots, cultural Marxism, and how America is “on the brink now of losing everything.”

Metaxas is a prolific author and speaker. Notably, he was the keynote speaker at the 2012 National Prayer Breakfast. Metaxas has received numerous awards and much acclaim for his writings and speeches.

Van Maren and Metaxas begin by speaking about the BLM and Antifa riots and the cultural Marxism being pushed by both of these movements. A big issue with cultural Marxism is that because they do not believe in God, they don’t believe a human being is made in the image of God. Therefore, “crushing human beings for what you call the greater good is perfectly fine.”

Not only is this belief directly opposed to the sanctity of the unborn, but it is opposed to the sanctity of any human life. If we don’t understand the foundational principles guiding these movements, we risk entering “the brave new world.” Metaxas encourages listeners to fight these movements with “everything we have, including, obviously, prayer.”

Benjamin Franklin, when asked about the type of government created by the Constitution, replied that it was a republic, but only if you [the people] can keep it. America was founded on the principle that people are moral — maybe not religious per se, but virtuous, moral people.

“You don’t need to be a Christian yourself, but you need to understand the virtue and the faith that have made all of this possible will continue to keep it possible. And if it goes away, people cease to govern themselves,” Metaxas shares with listeners.

When history isn’t taught, one side starts to take over and control the historical narrative. Van Maren and Metaxas agree that it is important for people to learn about the heroes of history and what motivated them, not just the villains.

Metaxas encourages listeners to read his books, Seven Men and Seven Women, about people who were heroes, mainly motivated by their faith, to do the right thing at the right time.

When asked about the next few months, Metaxas replied, “The people of the United States of America are going to have to fight very hard.”

He sees this as an existential crisis facing Americans and calls listeners to learn about the first two existential crises faced by Americans: Paul Revere’s ride and the battles at Lexington and Concord and Lincoln and the Civil War.

If we can turn to the strength presented by Americans during those times, we can gird ourselves to survive this current crisis. This will be a hard election, but we must not lose hope; we must fight. Metaxas quotes Lincoln: “We’re the last best hope of Earth.”