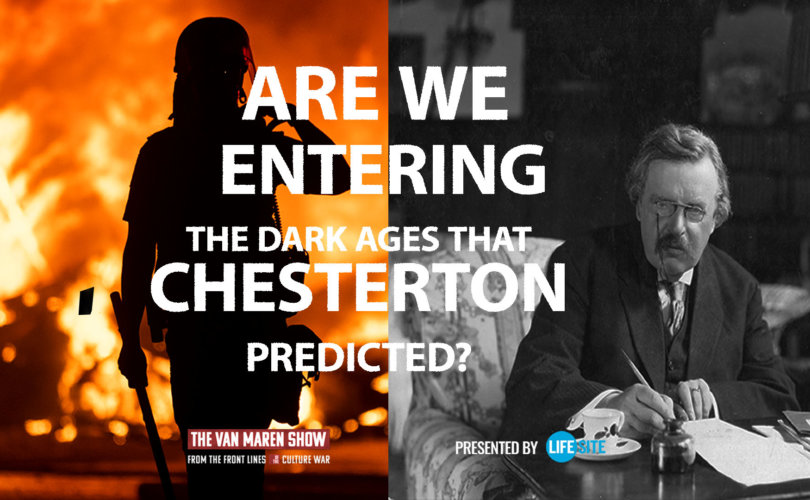 June 17, 2020 (LifeSiteNews) – G.K. Chesterton is a famous 20th century author and philosopher. During his time, Chesterton saw the beginnings of civilization crumbling and predicted a dark age was coming. With everything that is going on with the lockdowns and now the riots, it is difficult not to think that this time may be coming sooner than we thought.

In today’s episode of The Van Maren Show, Dale Ahlquist, famed Chesterton scholar and founder of the Chesterton society and the Chesterton schools, joins Jonathon Van Maren to discuss what G.K. Chesterton would think of the state of the world. Ahlquist and Van Maren speak about the riots, the upcoming “dark ages” of society, and what we need to do to save the culture for future generations, including taking kids out of public schools.

Ahlquist is based outside of Minneapolis and begins by sharing the devastation that swept through the city. Parts of the city were left in rubble. Buildings were covered with plywood with spray-painted pleas to the rioters not to destroy family businesses. Some areas still smoldered from the fires.

Thankfully, the suburbs were left largely untouched, but Ahlquist shares that some people could see the glow of the Twin Cities on fire from 20 miles away.

Chesterton said that every city was “built on a volcano” and is just waiting to erupt. Ahlquist tells listeners, “every place where there is this concentrated group of people, they are really in a sense of tension at all times and things could blow for one reason or another. Civilization is hard work and you have to work at it. And as soon as you stop working at it, it comes apart in a hurry.”

Chesterton spoke of the coming of the “dark ages” as our moral, religious, and cultural bases began to degrade. Ahlquist blames the public education system for accelerating this decline. Ahlquist points to the need to teach truth, goodness, and beauty to restore the culture and civilization.

Ahlquist points out that progressives often seek progress for the sake of progress, and spurn history.

“They look forward with enthusiasm because they are afraid to look back,” Chesterton wrote.

In addition to the public education system, Ahlquist points to the media’s influence in filtering the truth and discouraging discussion. Chesterton preferred to encourage true discussion, rather than allowing the media to filter the truth and hinder actual dialogue.

Ahlquist points to the media’s censorship of the March of Life despite the vast number of people who attend the event. Margaret Sanger and Planned Parenthood have targeted black babies for decades, killing millions of black lives, but the media and the rioters have completely ignored this fact.

As society continues its downward slide into the “dark ages” Chesterton predicted, Ahlquist encourages people to find and form solid communities. People should “establish communities of believers who educate their children and teach them the truth and teach them what justice looks like and also what truth, beauty, and goodness look like.”

Ahlquist, who founded the Chesterton Academies, sees that the public school system is fueling our moral decline.

“The public school system has been on a steady road to self-destruction and we are seeing the fruits of public education when we are watching our cities burn down.”

Ahlquist points to the disrespect people are having toward laws and law enforcement as an additional decline in civilization.

“I think as we see a growing lawlessness that's going to that's going to have a ripple effect. People have lost respect for authority. And so normal law is going to be difficult to enforce because people do not recognize the authority of even our political and law enforcement officials,” Ahlquist shares.

With the COVID-19 lockdowns and the discrimination against churches, but not “essential” liquor stores or golf courses, people’s respect for the government is plummeting.

Again, Ahlquist points to the importance of educating our children properly in order to save civilization. He encourages listeners to build their small communities around schools that teach about truth, goodness, and beauty, like the Chesterton schools.

“I think people of all faiths have to get their kids out of public schools because they're destroying the souls of their children,” Ahlquist tells listeners. “And those schools are driving a wedge between student and parent by teaching them something completely alternative to what the parents are trying to teach them.”

No one knows exactly when society will enter into the “dark ages” predicted by Chesterton, but today’s conversation with Dale Ahlquist provides families with great advice on how we can start preparing now.