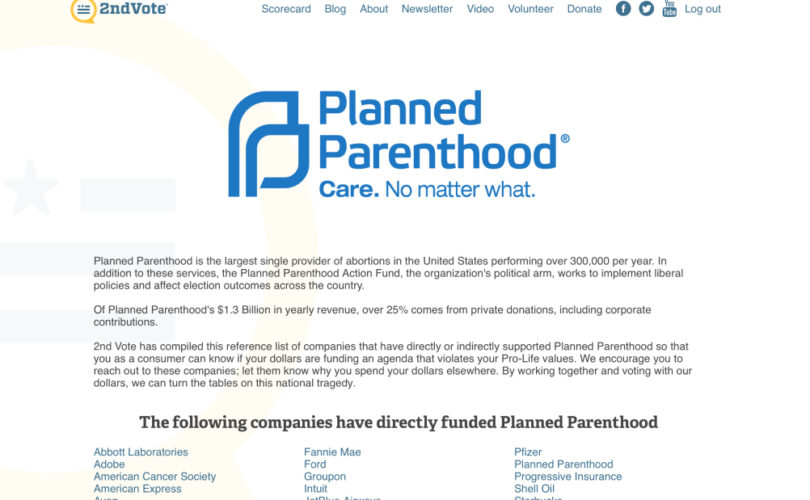 March 9, 2015 (LifeSiteNews.com) — Do you fly Southwest or JetBlue? Is Coca-Cola filling your fridge, or are Olive Garden's never-ending salads a staple of your diet? If so, then you may be supporting the millions of dollars corporations send to Planned Parenthood each year.

In a new report launched this morning, the conservative corporate watchdog group 2nd Vote reveals that hundreds of corporations are filling Planned Parenthood's coffers, often unbeknownst to their conservative consumers.

“2nd Vote is dedicated to helping conservative consumers keep their spending in line with their values,” 2nd Vote National Outreach Director Robert Kuykendall told LifeSiteNews in an exclusive interview announcing the launch of the organization's newest project. “We believe that everyone has one vote for their values at the ballot box, but they have the opportunity to vote on their values every day with their wallets.”

“When a corporation advocates for or against a policy they do so using our dollars, and 2nd Vote provides resources so that conservatives can makes shopping decisions that hold those dollars and corporations accountable,” explained Kuykendall.

While 2nd Vote has only been around for just over a year, they have graded hundreds of corporations on five issues — marriage, the environment, education, support for the Second Amendment, and, as of this morning, abortion. Using their “scoring” system, the organization ranks corporations on their direct or indirect involvement with these hot-button public policy and cultural issues.

“2nd Vote was actually born out of pro-life principles,” according to Kuykendall. “One of our founding members discovered that the dollars he was regularly donating to the March of Dimes were going to Planned Parenthood. The question from the beginning was, 'Why would a charity or corporation fund a group whose activity goes against the traditional values of so many Americans?'”

“We believe the reason for this is that Americans who hold pro-life and other traditional values have not done a good job holding these entities accountable,” said Kuykendall.

Kuykendall says Planned Parenthood was an obvious target for his group. “2nd Vote considers Planned Parenthood to be one of the top 'bad actors' on the Life issue. This organization is responsible for over 300,000 abortions per year and funnels millions of dollars in election activities for pro-abortion candidates and anti-life ballot initiatives. Therefore, we are releasing a list of all the companies in our database that have supported Planned Parenthood.”

“Our goal is to provide pro-life consumers with clear, concise information to use when making their shopping decisions. Readers will be able to follow links to each entity’s page to see exactly how that company or non-profit is involved with Planned Parenthood and how their dollars do indeed help fund the nation’s largest abortion provider.”

2nd Vote's scoring system breaks most corporations into one of two categories — those who fund Planned Parenthood directly, and those who do so indirectly.

“Our research team’s number one goal is to 'follow the money' — they’re constantly looking at tax forms and annual reports from the companies we score,” said Kuykendall. “When a corporation sends money or resources directly to Planned Parenthood, we consider that to be a direct donation. When a corporation funds or sponsors a third party like another charitable organization that makes donations to Planned Parenthood, we consider that to be an indirect donation. Susan G. Komen and the United Way are examples of other third party supporters of Planned Parenthood, in addition to the March of Dimes.”

Susan G. Komen has faced pressure for years over its funding of Planned Parenthood affiliates through its own subsidiary organizations. In 2012, the famed breast cancer prevention group first pulled its funding from the abortion giant, only to bring back its hundreds of thousands of dollars in donations after a national outcry.

“Our primary focus is establishing a link between the dollars consumers spend and funding for Planned Parenthood. If a corporation has an employee donation matching policy we will cite this with our research on the score page,” said Kuykendall.

“Every effort is made to make sure that the information we provide can be accurately linked as cited. However, assessing corporate activity is a moving target,” in part because website links change and annual reports provide new data, explained Kuykendall. “To this end, we are regularly updating our research as new information comes available.”

“We want more opportunities to highlight corporations that have changed policies and no longer support groups like Planned Parenthood. In these situations, we highlight 'good activity' and always reflect those actions in our research. Conservatives sometimes fall into the trap of being 'against' everything. 2nd Vote is looking for ways we can be positive and reward 'good actors.'”

Sometimes, things aren't cut and dry for 2nd Vote's scoring system. CEO actions, for example, are sometimes independently analyzed. And Kuykendall admitted that for corporations that indirectly or directly fund both sides of the abortion fight, things can be subjective. “Sometimes we have to score a company based on the 'whole picture' of their advocacy on a particular issue,” he said. But “we're constantly looking at ways to improve the somewhat subjective nature of assigning scores and provide the most accurate assessment possible.”

Pro-life Americans shouldn't just read 2nd Vote, says Kuykendall. They should also be pro-active in the fight for life. “In 2014, Planned Parenthood affiliates across the country sent millions of dollars to fight Tennessee’s Amendment 1 ballot measure that would allow the state legislature regulatory authority over abortion providers. The measure passed, but the pro-life advocates supporting it were outspent by a ratio of 4 to 1. 2nd Vote believes that it doesn’t make sense for pro-lifers to spend money that goes to help candidates that advocate for abortion or promote anti-life legislation through our shopping habits.”

“We call on pro-life Americans to first educate themselves on what causes and organizations their dollars support. Secondly, they should use this information to engage on several levels. Yes, they can do their part to help defund Planned Parenthood by shopping elsewhere, but most importantly they can use the information 2nd Vote provides to communicate with these corporations and let them know why they oppose the activities that go against pro-life values.”

“2nd Vote is building a network of concerned consumers through our free mobile app so that our members can have this information right on their phone as they make shopping decisions. Every 2nd Vote member, and every pro-life American, represents dollars, and we want to show these corporations how they can earn the business of our membership if they change their corporate activity on the life issue or even remain neutral.”

Examples of pro-life or abortion-neutral corporations include Hobby Lobby, which garnered a “5” on the 2nd Vote scale, and Ace Hardware, which has a ranking of “3.”