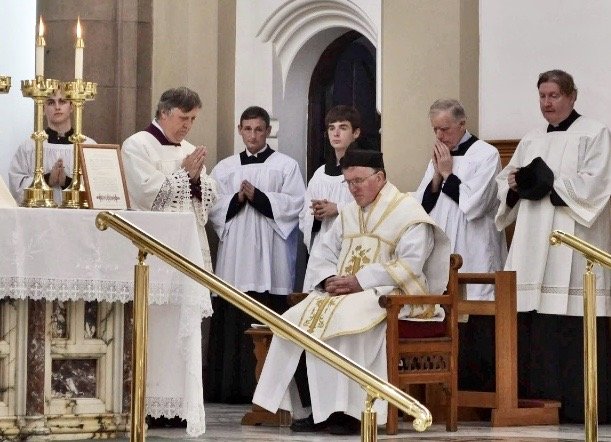 Fr. Stephen Dunn is a priest in the Archdiocese of Glasgow, Scotland.UnaVoceScotland

GLASGOW, Scotland, October 1, 2020 (LifeSiteNews) — A longtime priest has written an open letter to the Catholics of Scotland to protest their bishops’ acquiescence to state interference in public worship.

Fr. Stephen Dunn, a priest of the Archdiocese of Glasgow for 26 years, published his open letter on Tuesday in the online Catholic Truth magazine. In it, he takes the nation’s Catholic bishops to task for agreeing to close churches to the faithful and then reopen them only to a few.

“This morning I was deeply saddened and angered when I saw people having to be denied entry to one of our Catholic churches in our Archdiocese of Glasgow because there were 50 people already in, and in obedience to Archbishop Philip Tartaglia, and the guidelines issued by the Archdiocese and the Bishops Conference of Scotland, this procedure had to be carried out,” Dunn wrote.

“I was subsequently told that a man, his wife and his child, having traveled 15 miles, were turned away a couple of weeks ago, again because 50 were already in.”

“This is disgraceful, shocking.”

It was the last straw for the priest, who wonders in his letter why the bishops are so obedient to a government that “advocates Adultery, Abortion, Sodomy, and Transgenderism.”

Reflecting on the warning of Our Lady of Fatima that there would be “persecutions of the Church,” Dunn declared that one is “happening now.”

“The government, in its freedom-removal and (fearmongering) laws, said churches were to be shut, God’s people were not to gather at His house and celebrate/receive the Sacraments, the primary means of the Salvation of their souls,” he wrote.

“Bishop, are you of God or of the world? This intimidation is happening before your very eyes and you happily go along with it. Is this good shepherding?”

The Catholic Church has suffered greatly from persecution by civic forces in Scotland since the 1560 Scottish Reformation, when the celebration of Mass was banned. Scottish Catholicism held on regardless and was bolstered by the Catholic Emancipation of 1783, mass migration from Ireland in the 19th century, and the restoration of the Catholic hierarchy in 1878. Needless to say, the Catholic Church in Scotland did not acquiesce to its suppression and marginalization.

“Never in the history of  Mother Church has she been subject to the laws of the State,” Dunn wrote.

“The Church is not and never has been subject to the State; this is clear in all Encyclicals regarding the relationship between Church and State issued by the One, Holy, Catholic and Apostolic Church. It is frightening that Bishops have compromised this clear teaching by their obedience to the State, to the point where Sacraments, the primary means of salvation, are being denied even to the dying. Shocking.”

The priest does not accept the risks of contracting Covid-19 as an excuse for the measures that still interfere with ordinary worship because the risks of dying from the virus are so small.

Dunn believes that the closing of churches, the removal of holy water, and the inability of priests to minister to the dying in hospitals are all against the will of God. He accused the bishops of a lack of faith and indicated that he himself believes that God would not use holy water or churches to make His Son’s followers ill or allow His priests to become ill while administering the sacraments.

Dunn wrote, “During the time of great disease, at the time of the Reformation, the plague which ravaged Europe, (St. Robert Bellarmine) went about cleansing and dressing the wounds of those infected by the plague; what hand sanitizer was he using? Please tell me if you know – I better get some!”

The priest did not mince words in his letter. Quoting St. Augustine, he told the bishops and priests who have happily gone along with the state-mandated restrictions on worship that they are bad shepherds.

“St. Augustine, Bishop and Doctor of our Holy Catholic Church, says regarding shepherds, i.e. Bishops and we priests who have advocated and followed the above (lockdown) practices (…):

So let us see how the Word of God, that flatters no one, addresses the shepherds who are feeding themselves not the sheep. ‘You take the milk, you clothe yourselves with the wool, you slaughter the fatlings; but you do not feed my sheep. The weak you have not strengthened, the sick you have not healed, the crippled you have not bound up, the strayed you have not brought back, the lost you have not sought; any strong one you have killed; and my sheep are scattered because there is no shepherd.

Fr. Dunn told LifeSiteNews that he has received a lot of support from people about his open letter.

“The people are screaming for clear leadership that is at one with Christ,” he said.

The priest has not yet been approached by the bishop about his complaints, and he thinks that “they will want to stay out of it.”

Dunn repeated his disappointment that bishops around the world are “following the exact rules of government.”

“Governments which are declining to give, for example, the fullness of the factual evidence,” he added.

The priest believes that governments should give the exact figures of how many people have died in every age group every day so that people can make an informed judgment for themselves about their movements. The elderly, he concedes, will perhaps want to be more careful and wear masks, but ultimately death comes for us all.

As Fr. Dunn has asthma and uses an inhaler, he does not wear a mask during Mass. This got him into trouble in August when covering for a priest at a parish in Fife. Someone complained to the Archdiocese of St. Andrews and Edinburgh that Dunn didn’t wear his mask while administering communion to the faithful and because he blessed children too young to receive by placing his hands on their heads. The Archbishop of St. Andrews and Edinburgh then passed along the complaint to Dunn’s ordinary, the Archbishop of Glasgow.

But Dunn may be used to complaints by now as people sometimes complain about his strongly-worded homilies warning against sin and damnation. His own complaint is that bishops and some priests don’t themselves preach against these things.

“Our Lady of Fatima said it so clearly,” he exclaimed. “She showed suffering in hell to children. If that’s what the Queen of Heaven, the Mother of God, is showing, then why are they not prepared to stand up and show it? The Lord talks about it in the Gospels!”

Dunn believes that there are few priests in Scotland who think as he does, but they don’t speak with his “strong enthusiasm.”

“Some might even call it forcefulness, but I’m just (preaching) the Gospel and the lives of the saints.”

He believes that priests have a duty to give people the truth “so that they can act in reason with regard to the spiritual side.” Those truths include the facts about Covid-19, for he believes that the panic is being used to usher in the new world order.

“This whole thing about Covid is what Our Lady talked about,” he said. “Russia will spread her errors. It’s fear. It’s the position you must do this, you must do that, or else. And that’s what we’re living in.”

“The Archbishop has tried to suppress and intimidate him (e.g. the “or else” quoted in the Open Letter), but Father has withstood every effort to silence him,” she wrote.

“Here’s an example from some years ago. A friend and I heard Father preaching brilliantly about Hell. Sometime later, in conversation with Father’s mother, RIP, I mentioned this and she looked amazed, telling me that someone in the parish had complained previously when Father preached about the dogma of Hell, and the then-archbishop had instructed him not to do so again. Father, however, does not feel compelled to follow such unlawful instructions. He is a very strong character.”

LifeSiteNews contacted the Archdiocese of Glasgow for comment but has not yet received a response.