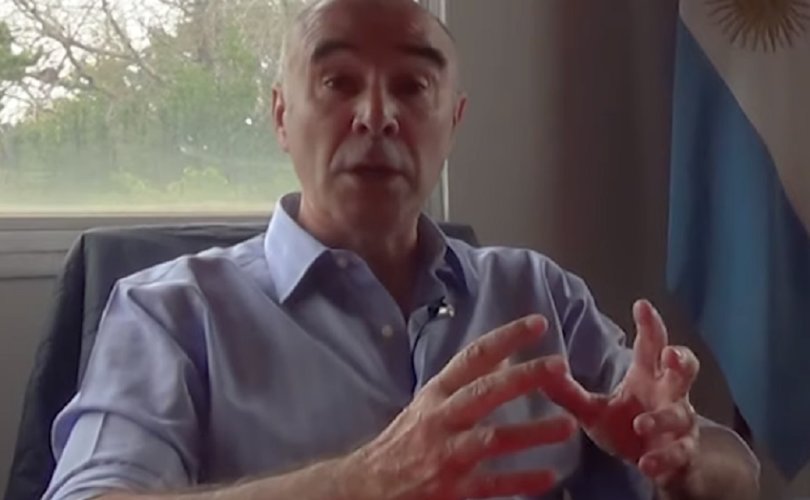 Interviewed by LifeSiteNews at his office near Buenos Aires, Gómez Centurión, a decorated soldier and the former vice president of Argentina’s national bank, set out his vision for the country should he win in October’s presidential election. He is leading the only pro-life party, while also espousing policies to favor family life. The 61-year-old is at the head of the ticket for the NOS Front, seconded by running mate Cynthia Hotton. Having served in the government under incumbent president Mauricio Macri, Gómez Centurión said he promises to “Make Argentina great again.”

Argentine society has seen recent controversial attempts to overthrow laws protecting unborn human life. This has given rise to conflict among contending groups in favor of the pro-life position and those opposed. Those advocating for human life are noted for wearing bandanas and kerchiefs in the sky blue color reminiscent of Argentina’s national flag.

Gómez Centurión said in the interview that his party is the only one currently campaigning that is pro-life. Comparing the termination of unborn human life to eugenics, he said with irony: “Abortion is the easiest solution to the problem. The man doesn’t help the woman, and you don’t need a reasonable adoption policy.”

At the interview, Gómez Centurión introduced one of his advisers, a physician who is a prominent member of the Argentine Pro-Life Medical Association, and said, “Helping women and infants also helps national growth.”

With regard to abortion politics, Gómez Centurión said international pressure is strongly in favor of liberalizing abortion law. He said the Inter-American Development Bank (IDB), for instance, loans money to the Argentine government that ultimately promotes abortion. He pointed out that in July of this year, the IDB loaned $250 million to the government, ostensibly to provide medical care to the residents of the numerous slums, known as “villas miserias,” in the Buenos Aires metropolitan area.

According to statute, abortion in Argentina is considered a crime that can be punished with one to 15 years of prison for anyone who induces one. However, this has been seldom enforced against the mothers involved or doctors, surgeons, midwives, and pharmacists who cooperate. Abortion can be induced legally by a doctor when the life of the mother is at risk, or if the pregnancy is the product of rape or an attempt against a woman who is demented or of limited mental capacity. Women seeking an abortion often recur to a judicial opinion in order to obtain authorization, even after the fact.

Since 2007, there have been attempts in Argentina’s Congress to loosen the law protecting unborn human life. In 2018, legislation emerged to legalize abortion and possibly provide it free of charge in government health clinics. President Mauricio Macri encouraged debate on the issue and said that year that he would not veto legalization if passed by Congress. While the lower chamber of Congress narrowly passed the bill, it was ultimately defeated in the Senate in June 2018.

Advancing the nation and families

Having labeled himself as a man of the “right,” Gómez Centurión said he does not wish Argentina to abandon some of its reforms. “We need not return to the past,” he said in the LifeSiteNews interview, “but we must advance toward the values we espouse: nation, family, work, and education.”

Gómez Centurión, who has held several jobs in the private sector and government, said more than 50% of Argentines are subsidized by 27% of other Argentines who are actively working and earning a living.

“In our grandparents’ day,” he said, “the Argentine government provided security, defense, utilities, excellent education and social welfare but represented 25% of the economy. In 45 years, that number has grown to 52%.” This means that 27% of society has switched from those who produce, Gómez Centurión said, to instead depend on the government for employment, pensions, and subsidies. This is a situation that must be reversed, he said, so Argentina can make the best use of its human resources and continue its development.

“Without families,” he added, “we have no nation.”

Even with his contemplated reforms of education, which would include imposing national norms for primary school and child nutrition, he said, “Without families, citizens cannot be educated.” Moreover, he said the model that the government should use generally should favor not only individuals, but family life.

Improvements in public education and infant nutrition, he said, are two of the most direct ways to improve the lives of his fellow citizens. “Malnutrition within the first months of a child’s life can lead to poor development of the infant brain,” the candidate said. “And without strong families and healthy children, we cannot have a strong country or economy,” he added.

Another area that would underwrite family life, he said, is the building of adequate roads so producers can transport their goods to market and families can get to schools and medical care during during the rainy winter months, when roads in rural areas are nearly impassable because of rains. “You can’t have a family because when you have a medical emergency at night, you can’t get out,” he said. Gómez Centurión said that an IDB proposal in 2017 to provide loans for road-building projects for rural areas never received government approval, thus revealing the current government’s prejudice against the countryside.

Gómez Centurión positioned himself as the candidate most favorable to traditional values in advance of the August 11 primary race. He now trails incumbent president Macri and his Peronist challengers. More than once, Gómez Centurión has said he wants to save the lives of both mother and child from abortion.

Cynthia Hotton, his running mate, is a pro-life politician who has wide support among evangelical Christians.

In a Twitter statement in June, Gómez Centurión denounced his opponents. He wrote: “While they are putting together the best electoral alliance possible by renouncing their values in order to retain power, we are trying to push our country forward by always defending the values of our nation.” He has also issued statements opposing sexual education in public schools, which advances transgender ideology.

Having broken with incumbent president Macri, Gómez Centurión tweeted earlier this year, “In view of two electoral proposals that by different paths would lead us to repeat the same mistakes of the last 40 years, with the same gangs involved in both groups, we are thinking about the future of our country.” President Macri has shown that he favors decriminalizing abortion.

The pope and Peronists

The Peronist presidential ticket, led by Congressman Alberto Fernández and Senator Cristina Kirchner (a former president herself), is forthrightly pro-abortion. In August, presidential candidate Fernández said he had made the “political decision” to see abortion completely legalized. In 2018, he started on that path, tweeting, “The punishment of abortion has only served to abandon poor women so that they cannot seek public assistance to interrupt pregnancy.” He added, “Abortion is not a moral or religious issue. It is a public health issue. It is time to legalize it.”

Cristina Kirchner voted in the Argentine senate last year to legalize abortion. While she remains personally opposed to the practice, she said in April that women should have the choice to kill their unborn children. She said she had not discussed her change of heart with Pope Francis, the former Cardinal Jorge Bergolio of Buenos Aires. However, she claimed that she met with two bishops of the Buenos Aires metropolitan area to express her position.

The pope has maintained close relations with Kirchner throughout the years of President Macri’s government, receiving her at the Vatican several times. Observers pointed out that the pope has not visited Argentina since his election, ostensibly so as not to influence politics. However, his meetings with Cristina Kirchner after her presidency have been widely presumed to show favoritism toward the Peronists. Also, the Financial Times credited the pope for aiding the Peronist party by urging Fernández and Kirchner to reconcile their differences in advance of the election. The pope also received Kirchner more than six times during and after her presidency, which ended in 2015. In contrast, the pontiff had two official meetings with President Macri since the latter’s assumption of the presidency in that year. This opinion was borne out in two weeks of interviews by LifeSiteNews in Argentina last month, in which several theologians, academics, priests, and laypeople recalled the former Archbishop Bergoglio’s flirtations with the populist Peronist movement in the 1950s and his prickly relations with market-friendly Macri, who served as mayor of Buenos Aires (2007–2015). Bergoglio became Pope Francis in 2013.

During the future pope’s rise within the Jesuit order, Bergoglio showed little interest in theology but did show a keen understanding of and a “Machiavellian” flair for politics, said a priest contacted by LifeSiteNews when interviewed recently in Argentina. According to the veteran priest and other interlocutors interviewed at length by LifeSiteNews, Pope Francis has not helped to bridge the growing divide (“grieta”) among the contending parties, classes, and between urban and rural Argentines. Overall, Argentine critics — especially clerics — of the pope are reluctant to be identified, stating fears that they could suffer consequences such as reassignment and even excommunication.