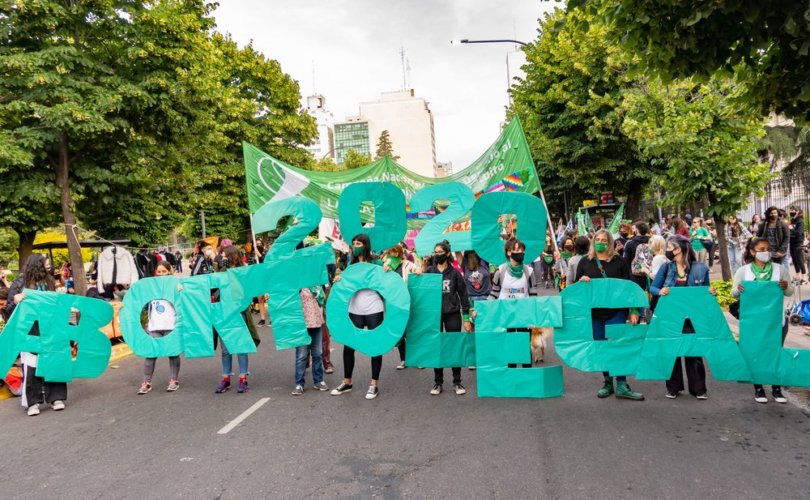 CHACO, Argentina, February 2, 2021 (LifeSiteNews) – After an injunction filed by pro-lifers, a judge in the northern province of Chaco, Argentina has blocked the recently enacted abortion law from taking effect in the region. Up until early January 2021, abortion in Argentina was a crime punishable of up to four years in prison. Now, Law 27.610 on Access to Voluntary Termination of Pregnancy (IVE) has legalized abortion up to 15 weeks. But for now, the law is blocked in the province of Chaco.

Judge Marta Aucar approved the precautionary measure, which defends the rights of the unborn child and declares the new law unconstitutional. It reads in part, “The execution of abortion procedures restricts, undermines, abuses, limits and alters the right to life of the unborn child, [which is] protected by our legal system from conception.” The petitioners behind the pro-life initiative are Hilda Beatriz Dellamea, Christina Araceli Chemes, Clelia Mirtha Avila, Gabreila Monzon, and Claudia Mariel Medina, sponsored by Fernando Enrique Guirado.

Pro-abortion groups are positioning themselves to fight back. The National Campaign for the Right to Legal, Safe and Free Legal Abortion said they are aware of the situation and are “working on a legal and political strategy.”

The province’s Secretary of Human Rights and Gender put out a statement saying that the provincial government has not been formally notified, arguing that, while they were respecting the judicial process, the abortion law has already been passed by the representatives of the people. “We are going to continue promoting this right to protect women and pregnant people.”

“For the judge's ruling to take effect,” BATimes reports, “the Chaco Province government must be formally notified, giving the authorities the right to appeal.”

The actions of Judge Aucar have been attacked by National Senator María Inés Pilatti Vergara. Vergara has accused Judge Aucar of being “closely linked to the Catholic Church” of being “mindless and irresponsible” and a “legal monstrosity.”

Pro-abortion lawyer Soledad Deza believes the injunction “is destined to fail” because Chaco cannot have a “lower standard of human rights than the rest of the provinces.”

However, including the national Constitution, each province has its own constitution. Things like health and education are regulated by each province according to its own needs. In that sense, even though the abortion law was voted in a federal move as a “public order,” the petitioners maintain abortion goes against the Chaco constitution. They believe that “the interpretation of the law [which is] more favorable to the human person” will prevail.

“In addition, it specifies that of the different ‘international instruments with constitutional hierarchy’ that protect the life of the unborn, the document mentions article 75, paragraph 23 of the national Constitution, where ‘children, women, the elderly and the people with disabilities [are] especially protected by our Constitution.’”

The Chaco dispute will most likely be slow moving through the courts and eventually land in the Argentine Supreme Court. Yet they are not alone. Other regions are taking similar pro-life action.

Lawyer Guillermo Juan Sueldo, a Buenos Aires attorney, initiated a protective measure or a writ of “amparo” as a remedy for the protection of the constitutional rights of unborn children against the overreach of the national government.

“The law must be subordinate to the Constitution,” Sueldo asserts. “Likewise, the jurisdictional protection of fundamental rights represents the foundation of the rule of law, understanding that the State does not grant rights, but rather recognizes them. For this reason, it corresponds that the Judicial Power, in its role as protector of the constitutional order, guarantees fundamental rights, corresponding to the functions of the State.”

— Article continues below Petition —
PETITION: Hold UN accountable for babies killed by sex-selection abortion
Show Petition Text
14038 have signed the petition.
Let's get to 15000!
Thank you for signing this petition!
Add your signature:
Show Petition Text