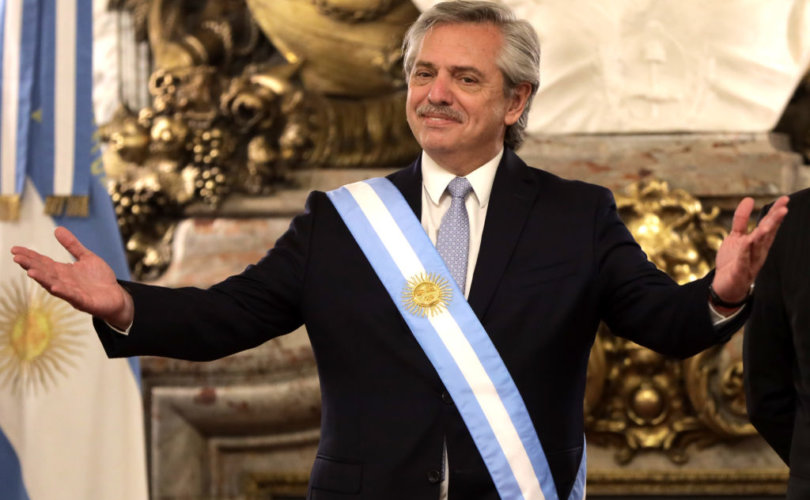 Argentina’s Health Minister Gines Gonzalez Garcia announced a new protocol last week. It circumvents the penal code and allows abortion for girls as young as 13 in cases of rape, with no need to contact police. This is a confirmation of newly-inaugurated President Alberto Fernandez’s vow to expand abortion.

In a news conference last Thursday, Gonzalez Garcia, a medical doctor, said, “The protocol will be used as a guide, especially in cases where the law clearly allows for the interruption of pregnancies.”

The new guidelines will require public hospitals to offer abortion.

Catholic hospitals are currently exempted. The government claims that it will respect the rights of doctors and other medical professionals to refuse participation in abortion.

While Argentine law permits abortion when the life or health of the mother is endangered, or in the case of rape, local hospitals often refuse to perform abortions. Those violating the current law by committing non-allowed abortions can face up to four years in prison.

Auxiliary Bishop Alberto Bochatey of La Plata, a city near Buenos Aires, remarked about the new regulation: ““It’s as if they’ve already created legal abortion in Argentina,” while he said that the Fernandez administration is squelching “democratic debate.”

According to the Buenos Aires Times, Bochatey said: “The Argentine people aren’t in favor of legal abortion, as was shown in the democratic demonstration in Congress in 2018.” He referred to the Senate vote of last year that rejected a bill that passed the lower Chamber of Deputies that would have legalized abortion up until the first 14 weeks of pregnancy.

In an interview with LifeSiteNews, notable pro-life advocate Mariana Rodriguez Varela likened the latest Health Ministry protocol to an abolition of any other part of the penal code through a similar executive fiat.

“Can the government decide tomorrow to announce a new protocol to allow kidnapping? This is an infringement on Congress, which is the only body that can change the Penal Code,” she said.

Rodriguez added that the new protocol virtually allows abortion under all circumstances.

President Fernandez took office last Tuesday. An adherent to the Peronist movement, he vowed this year to liberalize abortion laws. Vice President Cristina Kirchner, once president herself, changed her mind about abortion while serving in the Senate last year and has become a proponent of the practice. Her presidential tenure was racked with inflation and received accusations of corruption and close ties to the socialist government of Venezuela. As the Peronist movement moved to the left, Kirchner voted last year as a senator in favor of liberalizing Argentina’s abortion law. However, after a narrow vote, the abortion law was unchanged.

In the last weeks of the government under former President Mauricio Macri, abortion as a political issue was revived when former Health Minister Adolfo Rubinstein announced in the government gazette new rules that further liberalized the practice of abortion. On November 22, Macri rescinded that protocol, claiming that Rubinstein had made a personal decision that had overstepped his authority. Rubinstein quit the government as a result.  During his administration, Macri was largely pro-life and rallied prolifers during the last weeks of his campaign to bolster his pro-life credibility.

Health Minister Gonzalez Garcia said at the Thursday news conference that he will advance the use of abortifacient drugs that are often used to abort unborn babies during the early stages of pregnancy. These may include Misoprostol.

“This is a support, so that they are protected and feel that the Executive is trying to accomplish [something].”

Gonzalez Garcia announced that he will meet with health ministers from the 23 provinces to discuss the protocol so that it will not be a “source of confrontation,” and that the officials know that adjusting to the new rule means obeying the laws of the country.

“In the end, whoever doesn’t like the protocol, doesn’t want to obey the law.”

He continued:  “We have started on the road of applying the law, and we believe that there will be some groups against [abortion] rights who will challenge [ it ]. We are issuing a health rule so that the law and the rights of the person who is regretfully in the situation of a voluntary interruption of pregnancy are observed.”

Recognizing that there objectors to abortion in Argentina, a largely Catholic country, Gonzalez Garcia said, “We are respectful, but [objections] cannot be used as a ruse to disobey the law. The law respects objection, but it cannot be without an institutional response. We know that there are institutions that have collectively tried to do this and, obviously, what it [the protocol] sets out is what the law says.”

On Friday, the government’s official gazette published the new protocol, which is an update of the protocol that the Kirchner administration issued in 2015. The new protocol allows girls as young as 13 years of age to abort their babies legally due to “physical and emotional risks associated with pregnancy.” Women and girls over the age of 15 can choose an abortion, without parental or spousal consent, if pregnancy puts at risk their “physical, mental or social wellbeing.”

In cases of alleged rape, the Argentine Supreme Court allows, the protocol notes, that women and girls need only make a sworn statement attesting to rape. No evidence or subsequent criminal investigation is required.

Argentina’s current penal code restricts abortion. In 2018, the Argentine Senate narrowly defeated a law to liberalize abortion after years of debate. Widespread, and some times violent, protests by feminists demanding liberalization of abortion laws raged in Argentina in both 2018 and 2019. Catholic churches have been targeted for vandalism and firebombs in some of the protests.

The penal code, which remains unchanged by Argentina’s congress, notes that abortion is not punishable [in Spanish: no punible] under the law when the life or the health of the mother is endangered. Also, abortion is permitted if the pregnancy is due to rape or is a result of an “assault against the modesty of a mentally handicapped or insane woman.” The 2015 protocol issued by the health ministry under the former Peronist government to spread the practice of abortion was made null and void by the Macri administration because it conflicted with the penal code.