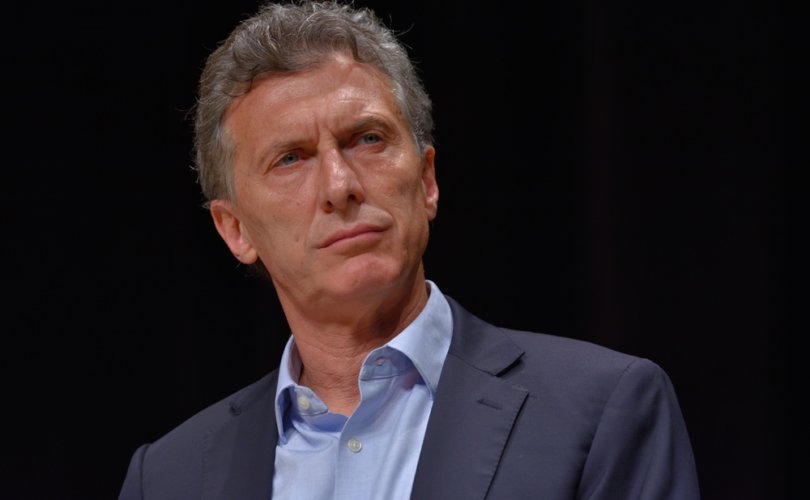 BUENOS AIRES, Argentina, March 15, 2018 (LifeSiteNews) – The pro-abortion movement in Argentina is gaining ground while the country’s “pro-life” president says he won’t stand in the way of pro-abortion legislation.

Abortion is only legal in the Pope’s native country in cases of rape, fetal deformity, or when the mother’s life is in danger. Under current law, women seeking abortions must apply to a judge for permission.

But up for a vote in Argentina’s Congress in five days is a proposed bill legalizing abortion on demand through the first 14 weeks of pregnancy.

Self-described “pro-life” President Mauricio Macri promised last week that if Congress passes the legislation on March 20, he won’t veto it.

Even though Macri is personally opposed to abortion, “he is open to accepting what [Congress] decide[s],” a government source told La Nación.

Popular support for abortion is apparently growing in the traditionally Catholic country.

“There [are] more people talking about abortion than ever before,” said Marlena Pichot, an Argentinian pro-abortion comedian. “For many years there were very few like me…willing to talk openly about it.”

Thousands of women – some media suggested hundreds of thousands – marched on March 8, International Women’s Day, in Buenos Aires. The march focused on equal pay, but many participants wore the symbol of the pro-abortion movement, a green bandana.

In another demonstration, women put panties over their faces as masks.

Cabinet Chief Marcos Peña said the government will consider a popular referendum on the issue. Such a means to legalize abortion is “on the table,” he affirmed.

Abortion supporters predict an easy passage in Argentina’s lower legislative chamber along party lines. Its fate in the Senate is unknown.

Violence against women is a major issue in Argentina. The non-governmental organization La Casa del Encuentro says that an Argentinean woman is killed every thirty hours – 80 percent of the time at the hand of her domestic male mate.

Some protesters against domestic violence have become advocates for abortion.

“Many women who didn’t consider themselves feminists joined” the movement, Pichot said.

But the pro-abortion feminists are violent, too.

In 2015, a of angry women outside the Cathedral of Mar de Plata – some of them masked and many topless – physically assaulted men praying and protecting the doors of the church. The pro-abortion feminists attacked the police and attempted to set the cathedral on fire.

In another instance of pro-abortion violence, topless women pelted St. Ferdinand the King Cathedral in Resistencia with rocks, paint, and reddened tampons. They also attempted to set this church ablaze. They burned the door of the cathedral with a pile of burning trash and vandalized a statue of the Virgin Mary in front of the building.

Pro-abortion women also defaced the door of the Neuquen Cathedral as part of a “women’s rights” march.

And last year, feminists in pink masks staged a “bloody” abortion parody on a woman dressed as the Virgin Mary outside a northern Argentina cathedral as part of the International Women’s Day protest.

Last year, Chile’s constitutional court approved a bill introduced by President Michelle Bachelet legalizing abortion in cases of rape and “when the fetus is unviable.”

In 2012, Brazil legalized abortions in cases of anencephaly.

Uruguay legalized abortion on demand for any reason in 2012, but Honduras, El Salvador, Nicaragua, and the Dominican Republic remain pro-life.