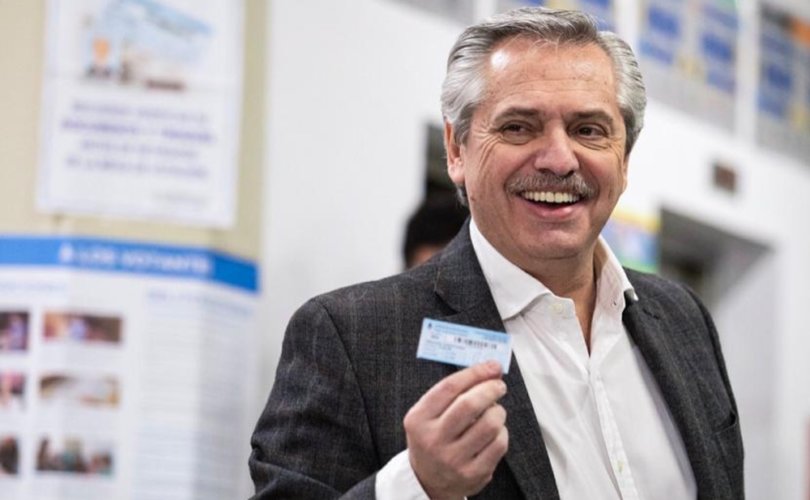 BUENOS AIRES, August 15, 2019 (LifeSiteNews) – Argentina leftist presidential candidate Alberto Fernández, who soared to victory in the country’s primary elections on the weekend, has declared that he will “decriminalize and legalize” abortion if elected in October.

Fernández and his running mate, former president Cristina de Kirchner, won the primary race on Sunday and became the candidates for the TODOS party, a leftist party that has its antecedents in the Peronist movement inherited from 1940s fascist dictator Juan Peron.

Speaking to Argentina’s Net TV, Fernandez said in reference to abortion, “I don’t want another woman to die. It must be decriminalized immediately.”

Fernandez added, “I have made the political decision to decriminalize and legalize abortion because I don’t want another woman to die. First, it must be decriminalized in order to end clandestine abortion. We must not ignore what’s happening. It is a public health problem.”

Abortion in Argentina remains a punishable crime except in the cases of rape, if the mother’s life or health is at risk, or if the woman was mentally disabled. Last August, the Argentina Senate voted against legalizing abortion despite an earlier vote in Argentina lower Chamber of Deputies in favor of legalization.

Fernandez said he plans to introduce gradually the liberalization of abortion in the South American republic.

“It seems to me that there are two stages: first, it has to start with the decriminalization to end clandestine abortion, so that women may have more mechanism to protect their health,” he said.

In July, however, Fernandez said during his campaign that once he becomes president, he wants to decriminalize abortion “immediately.”

On Sunday, a count of 87.37% of the ballots cast in the primary race showed that Fernandez and Kirchner won 47.37% of the votes, as opposed to the 32.30% who voted for the incumbent, President Mauricio Macri. The 15 point spread made Wall Street tremble in trading on Monday, as bondholders reacted by selling off Argentine bonds. President Macri introduced economic reforms and cut popular subsidies in an effort to stabilize the national economy and currency. Thus he earned the ire of leftists and Peronists who accused him of bowing to the interests of the United States and the International Monetary Fund. Should the results of Sunday’s primary be repeated on October 27, the date of the general election, Macri is certain to lose in a first round.

The only presidential in-person survey conducted by an independent agency (Celag) found that Fernandez is leading Macri 42.5% to 33.5% in voter intentions.