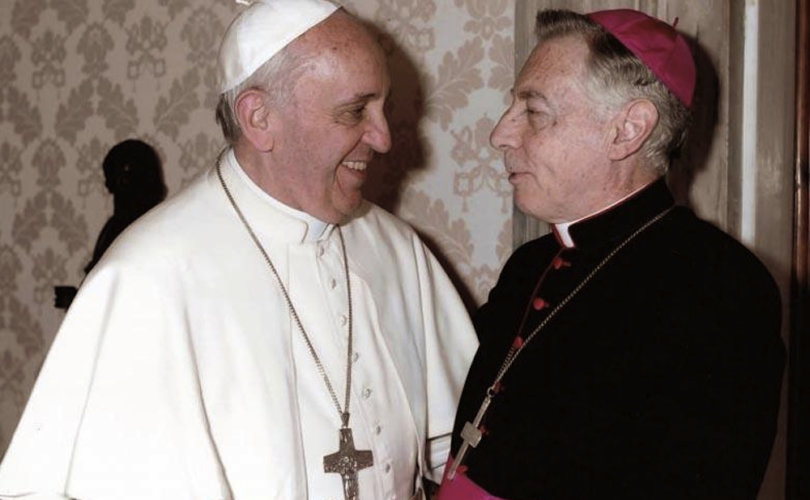 September 20, 2016 (LifeSiteNews) – The Catholic archbishop of the Argentinean city of La Plata is under investigation by the country’s “discrimination” police for condemning the modern acceptance of sexual promiscuity and “unnatural” unions, according to local media sources.

Archbishop Héctor Aguer has incurred the wrath of Argentina’s Secretary for Human Rights and perhaps the government’s National Institute Against Discrimination, Xenophobia, and Racism for writing that modern society’s culture of promiscuity is “banal,” “animalistic,” and “infantile.”

In a recent article written for the La Plata newspaper El Dia, Aguer laments that the act of “carnal copulation outside of marriage” has been “transformed into something trivial, common, unsubstantial.”

“I call it a ‘vice’ because the dictionary defines a ‘fornicator’ as ‘he who has the vice of fornicating,” Aguer writes. “It’s ‘he’ or ‘she’ in principle, although these days ‘gender equality’ permits other, unnatural combinations.”

Recognizing that the word “fornication” has fallen into disuse precisely because it is no longer taken seriously as a vice, Aguer denounces the glorification of sexual promiscuity in the culture of entertainment celebrities, which leads people to accept extra-marital intercourse as if it were inconsequential.

“Scandal, as it was once called: to induce another to evil, which is more intense when the deviant conduct is promoted like a fashion,” Aguer writes. “Bad examples spread, fascinate, and that which is abnormal can gradually become first something desirable, then morally neutral, and finally normal. ‘Everybody does it,’ is the slogan.”

Aguer anticipates in his article that his statements might incur the wrath of Argentina’s National Institute Against Discrimination, Xenophobia, and Racism (INADI), noting in his last sentences that “I cannot cease to proclaim the truth, as much as it might annoy INADI, if they find out.”

The archbishop’s premonitions have proved correct. Soon after the interview, the Argentinean Homosexual Community (CHA) said they planned to make a complaint to INADI because the archbishop’s words “encourage homophobia.” Argentina’s Secretary of Human Rights, Claudio Avruj, confirmed that INADI is investigating Aguer’s comments.

In an interview with the newspaper La Nacion, Avruj complained that the archbishop’s position is “authoritarian, discriminatory, and represents the most hard-line wing [of the Church]. It deserves the rejection of all of us.  … The issue of liberty, of free choice, gender identity deserves fundamental respect, recognition, and much care, and not an attack with this virulence.”

A source close to the archbishop, however, told La Nacion that the reaction from the faithful has been very different. “Many congratulated him for his bravery for saying those things,” the source was quoted as saying.

The Catholic Church teaches that sexual intercourse outside of marriage is a mortal sin; that is, a sin that causes the loss of the sanctifying grace of God and leads to eternal damnation, if it is not repented of and forgiven before death.

The Catechism of the Catholic Church states that fornication “is gravely contrary to the dignity of persons and of human sexuality which is naturally ordered to the good of spouses and the generation and education of children. Moreover, it is a grave scandal when there is corruption of the young” in paragraph 2353.

The Catechism also quotes the Scripture as saying with regard to fornication, “I warn you, as I warned you before, that those who do such things shall not inherit the Kingdom of God.”

Spanish cardinal doubles down on rebuke of ‘gay empire’ amid attacks