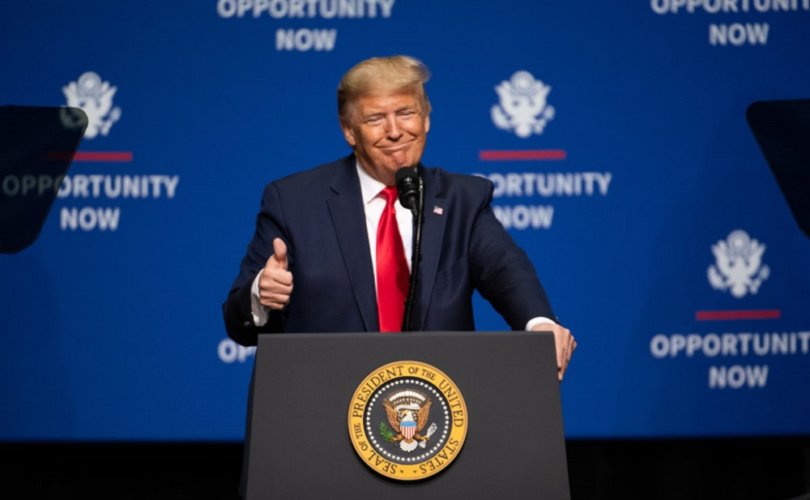 In a Feb. 8 video appeal to fellow Argentines encouraging them to fight the proposed decriminalization of abortion, Archbishop Emeritus Héctor Aguer of La Plata, Argentina praised President Trump for his appearance at the 2020 March for Life and for his “magnificent speech, a commitment, an extraordinary defense of life.”

“The contrast with the politics and government of Argentina is scandalous,” he said.

At the 2020 March for Life, Trump made the first presidential appearance at the annual event, telling the crowd of thousands that “unborn children have never had a stronger defender in the White House.” In addition, Trump’s nominations to the Supreme Court and federal courts have been applauded by pro-life advocates, even while praise from U.S. Catholic bishops has been scant.

Archbishop Aguer — who frequently comments on Church affairs and is counted as one of the most orthodox prelates in the South American republic — denounced in his video appeal pro-abortion Catholic president Alberto Fernández of Argentina and called on pro-life patriots to march once again in defense of life.

Fernández and the left-wing Peronist movement have been successful, so far, in legalizing same-sex “marriage” and have promoted a pro-LGBT agenda. However, in 2018, sweeping legislation to decriminalize abortion was narrowly defeated in the Argentine Senate when pro-life Argentines held mass rallies in defense of human life. Since then, the newly elected pro-abortion Peronist movement in the persons of Fernández and Vice President Cristina Kirchner and their majority in Congress have sought to diminish protections for unborn babies through legislation and regulatory fiat.

In his video message, Aguer recalled that just before his recent meeting with Pope Francis, President Fernández announced that part of his plan to legalize abortion will be to offer assistance to adolescent and adult women who decide not to abort their babies. The president made the offer, apparently, to lessen the impact of his expansion of abortion services. And even while the government claims that objections on the basis of conscience will be protected, government doctors and health professionals still fear they will have to choose between their jobs and committing abortions.

“Our country’s president is a strong supporter of legalized abortion. One of the first items of his government has been the resuscitation of an abortion bill that failed in the [Argentine] Senate two years ago. But because he was to meet the Holy Father, he added a small concession: that the state will accompany the expectant woman who wants to continue the pregnancy and have her baby. So, he added a little good to something that is bad,” he said.

“The current health minister, Dr. Ginés Gonzáles García, issued a protocol through which a 14- or 15 year-old teen can request an abortion, if she is the victim of rape, without parental permission,” he added.

Aguer said that during Gonzáles’s previous turn as health minister during the Kirchner government, Gonzáles said of the government’s distribution of condoms: “God always forgives, but AIDS doesn’t forgive.” The archbishop remonstrated with the official, saying God does forgive, but only those who sincerely repent of their sins and then resolve to leave sin behind.

Aguer said that because the current government is bent on promoting abortion, Christians and others of good faith should not be shy in making their pro-life witness known. Apart from making appeals on the individual and local levels, Aguer said pro-lifers should make their views known in mass rallies.

Evangelical Christians and Catholics are jointly involved in the March. In addition, on March 25, which falls on the Feast of the Annunciation, Catholics have also been invited to pray the rosary at the cathedral of Buenos Aires and cities all across the country and to attend Mass with the intention of preserving the lives of unborn babies. The Feast of the Annunciation commemorates the moment recorded in the Gospel when the angel Gabriel asked Mary to become the mother of God. At her “yes,” she became pregnant with Jesus Christ. The solemnity has been dubbed the Day of the Pre-Born Child by pro-life advocates in Argentina.

Yes to the lives of women and babies

While the rest of the world celebrates International Women’s Day on March 8, thousands of Catholics will set out on a pilgrimage to Luján, a city near Buenos Aires, to protest against the Peronist pro-abortion policy. The Catholic bishops of Argentina will concelebrate a Mass in the large square outside the Basilica of Our Lady of Luján. The bishops are slated to ask the Patroness of Argentina to offer protection for human life “from conception until natural death.” The slogan for the pilgrimage is “Yes to woman; yes to life.” The bishops invited all people of “good faith” to join in common prayers on that day.

Thousands turned out for pro-life Masses in Luján in previous years, which have been held outside of the basilica because of the over-capacity crowds.

In Buenos Aires, Catholics will gather on March 7 to pray the rosary at Plaza Guemes, one of the largest public squares that honors one of the heroes of the nation’s independence. This is the second such public recitation of the rosary in defense of human life. Last year’s gathering brought together several thousands in prayer to end abortion. This is one of a number of public demonstrations of faith that are expected this year while Congress continues to push for decriminalization of abortion.

Some demonstrations by pro-abortion groups have been marked by violence, and pro-life advocates told LifeSiteNews that they fear that leftists and feminists may attack and burn churches as the year advances and congressional debate over abortion heats up, In Mexico, and neighboring Chile and Peru, leftists and feminists have been held responsible for such arson attacks on churches of various Christian denominations. The historical memory of Argentines prompts some to fear attacks on churches this year. Many can recall that Peronists burned churches in the 1950s at the behest of President Juan Domingo Peron.

A video emerged last week that showed that President Fernández and his mistress both received Holy Communion at St. Peter’s Basilica in Rome from the hands of Argentine archbishop Marcelo Sánchez Sorondo.

When LifeSiteNews journalist Diane Montagna asked Sorondo to justify giving the Eucharist to Fernández, the archbishop called her a “fanatic.” Sorondo, who serves as chancellor of the Pontifical Academy of Sciences, denied that canon law “obliges” a priest to deny the Eucharist to openly pro-abortion politicians.

“The [Argentine] president is not excommunicated, so I can give him Communion,” he told LifeSiteNews. The pro-abortion policies of the president have “nothing to do with it,” he said. He suggested that denial of the Eucharist to pro-abortion politicians is exclusively an issue for the Church in the United States. However, Archbishop Aguer expressed dismay last week that Fernández was permitted the Holy Eucharist.