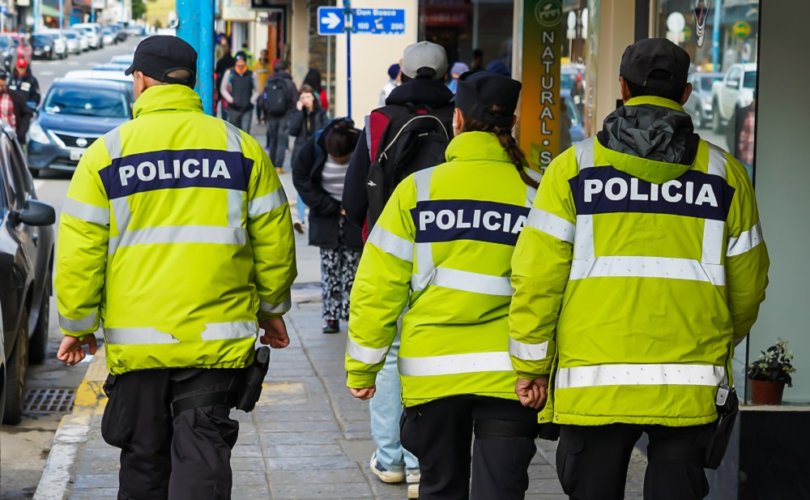 SAN LUIS, Argentina, May 7, 2020 (LifeSiteNews) — Police in Argentina arrested ten faithful for attending a Mass despite stay-at-home orders in place in the area. Among those present for the Mass celebrated by 79-year-old priest José Mendiano were two former policemen.

According to Crónica, Enrique Miranda, a lawyer, told the media after his arrest, “It must be said once and for all. This is a big circus, there is no pandemic here.” The province of San Luis, with a population of almost half a million people, reported only ten confirmed cases of coronavirus so far, as well as three suspected cases.

“We prayed for the people who died from coronavirus and for the health of those infected,” he added. “This is all a big lie, a farce. This is a house arrest being imposed on the people of San Luis by the local government and the national government.”

He emphasized, “The law may stipulate whatever it wants, but in matters of faith it is exclusively the competence of the Catholic Church.” Miranda said the national government “is wrong if it thinks that we are going to bow down before it.”

Local bishop Pedro Daniel Martínez Perea tried to downplay the significance of the event. “It is regrettable what has happened. Nobody likes to be taken out of a church, nor do the authorities like to take them out of that place,” he said.

The bishop did not defend his priest for having several people participate in his Mass, nor did he, apparently, protest the government’s quarantine orders.

“What does attract my attention is that in the pastoral letter I asked them to hold the Masses without the faithful,” Martínez explained. “I cannot explain to myself how this could have happened differently from what the diocese had foreseen.”

Bishop Martínez reached out to both the priest and the faithful after the incident. He praised the small congregation for their “good intention” in observing social distancing measures but called them out for breaking “an objective rule.”

“We are all making an effort, Catholics and non-Catholics alike, to respect each other,” he said.

As Crónica reported, neighbors had alerted the police after noticing “movement inside the chapel.” They feared “something had happened to the priest because he is diabetic, has problems with blood pressure, and suffers from deafness. They never imagined that a Mass was being held there.”

Recently, Archbishop Carlo Maria Viganò, in the context of public Masses being prohibited, said that “the faithful have the right, as well as the duty, to assist at Mass, to go to confession, to receive the Sacraments: this is a right that comes to them as living members of the Mystical Body in virtue of their Baptism.”

“The Pastors have therefore the sacred duty — even at the risk of their health and of life itself, when required — to fulfill this right of the faithful, and for this they will have to answer to God, not to the President of the [Italian bishops’ conference] nor to the President,” the former apostolic nuncio to the United States emphasized.

Viganò asked, “Do you believe that, when the churches in Mexico or in Spain were closed [in the 20th century], when they prohibited processions, when they banned the wearing of the religious habit in public, that things started differently [from how] they have started now?”

He stressed that Catholics, especially members of the hierarchy, should not allow “the freedoms of the Church to be limited by the excuse of an alleged epidemic!”

Obedience, Viganò said, is not an excuse for servility. “If our faith was based only on obedience, the martyrs would not have had to face the torment to which the civil law condemned them: it would have been enough to obey and burn a grain of incense before the statue of the Emperor.”

In the aftermath of the post-synodal apostolic exhortation Amoris Laetitia with its discussion of giving Holy Communion to Catholics who are civilly divorced and living in adultery, San Luis Bishop Martínez had confirmed the traditional teaching of the Church.

“And, therefore, if they continue in that state of cohabitation (more uxorio) while the sacramental bond with another person remains, they would be in an objective state of sin. This reality of life precludes the reception of Holy Communion, except in danger of death, because it contradicts ‘the loving union of Christ and the Church signified and made present in the Eucharist,’” he wrote.