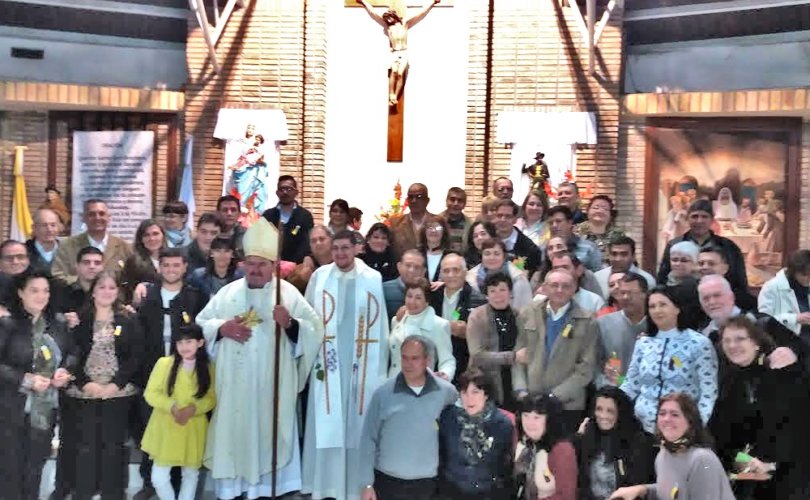 SANTA FE, Argentina, June 15, 2017 (LifeSiteNews) – An Argentinian bishop, inspired by Pope Francis’ Exhortation Amoris Laetitia, celebrated a special Mass for civilly-divorced-and-remarried couples in his diocese. The thirty or so couples were all invited to receive Holy Communion despite there being no indication that any of them had promised to live as brother and sister.

“Welcome back home,” Bishop Angel José Macin of the diocese of Reconquista told the couples during the Mass celebrated on the June 11th Feast of the Blessed Trinity, according to Argentinian news website Radioamanecer.com.ar.

The couples were given Holy Communion in what was described as a “festive atmosphere” in the parish church of Saint Roque. Relatives took photographs.

Bishop Macin was appointed by Pope Francis in October, 2013. During Mass, the Bishop said that the “marginalized” couples had been accompanied through a “path of discernment” for six months of Saturday meetings. The accompaniment was performed, he said, according to the norms the Argentinian bishops made six months ago and that were approved by Pope Francis.

Having now completed this discernment, he said, the civilly-divorced-and-remarried couples were able to be included in the sacramental life of the Church, including receiving Holy Communion.

The ceremony contained many references to Pope Francis’s Exhortation Amoris Laetitia, which was released last year. The bishop said that the Exhortation allows couples in “irregular” situations to receive Communion.

Last September the bishops of the pastoral region of Buenos Aires released guidelines based on the Exhortation in which they said that in “complex circumstances” when remarried couples cannot “obtain a declaration of nullity,” priests can nevertheless move forward to grant them access to Holy Communion.

Then, in a surprise move, Pope Francis wrote to the bishops, telling them that there is ‘no other interpretation’ of his Exhortation than what they put in their guidelines.

Included in the Argentinian guidelines was that civilly-divorced-and-remarried Catholics wanting access to Holy Communion must begin a “process of discernment accompanied by a pastor,” that a pastor should “renew the couples’ personal encounter with the living Christ,” and that such couples for whom it is not “feasible” to live in continence may still “undertake a journey of discernment” leading to “access to the sacraments of Reconciliation and the Eucharist.”

“[The] document is very good,” wrote Pope Francis, “and completely explains the meaning of chapter VIII of Amoris Laetitia. There are no other interpretations.”

SIGN THE PETITION: To Pope Francis: I support the 4 cardinals' letter pleading for clarity