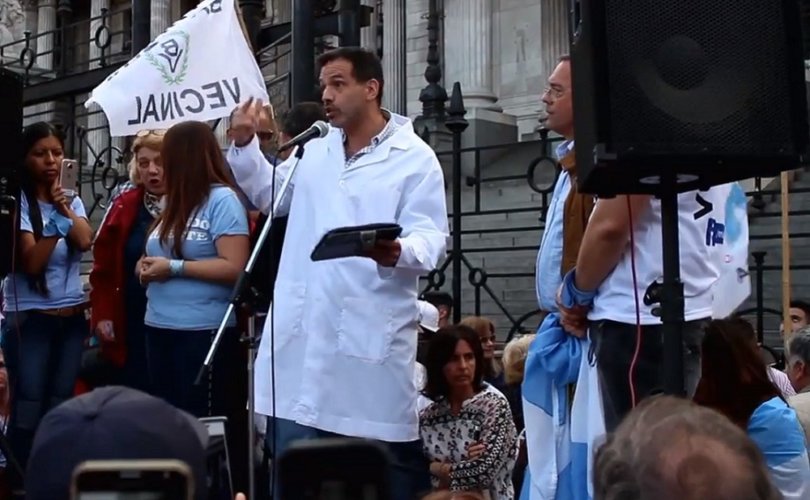 May 22, 2019 (LifeSiteNews) – A doctor in Argentina has been found guilty of failing to accomplish his duties as a public functionary after he refused to perform a legal late-term abortion on a woman who was 23-weeks pregnant.

Dr. Leandro Rodriguez Lastra, prosecuted in the Argentinian town of Cipoletti for “obstetrical violence,” will be sentenced during a special hearing in the days to come by a criminal court in Cipoletti.

Dr. Rodriguez Lastra could receive a suspended prison sentence of up to two years, meaning that if he once again were to refuse a legal abortion he would immediately be sent to jail. He is also under the threat of being struck down from the register of licensed physicians, which would mean the loss of his job.

He was judged on Tuesday of bearing “penal responsibility” for having disregarded the law on abortion by “omission.”

“I would act the same again because no child’s death is going to weigh on my conscience,” he told InfoBae days before the trial. He also described the horror of a late abortion and insisted that he would also aim to “save both lives:” that of the mother and that of the child.

Rodriguez Lastra was holding his wife’s hand while the verdict was read. He told the press he is still convinced that he is innocent and had not been expecting to be found guilty. He will appeal the sentence, he has already indicated. He also said in an interview after the verdict that he greatly desires to speak with the woman in the case and has always been open to that.

The trial received a great deal of media attention in Argentina, where abortion remains illegal in principle but is not punishable in so-called “extreme cases” such as pregnancy resulting from rape or sexual abuse of a mentally impaired woman, or danger to the life of the woman, following a federal Supreme Court ruling.

In the province of Rio Negro a legal protocol has confirmed these “exceptions” and provides women with a legal right to obtain abortion in a public hospital when they apply. Most doctors in Cipolletto and the neighboring towns are conscientious objectors, however.

According to the public prosecution, represented by Santiago Marquez Gauna – who chose to prosecute under the heading of “obstetrical violence” – and Anabela Camporesi, Rodriguez was not listed as a conscientious objector. Because he “did everything possible not to perform the abortion” they asked for him to be condemned for “obstructing a legal abortion procedure.”

During the hearings which started on May 13 and lasted for four days, it was made clear that the woman in the case at first presented herself in the neighboring town of Fernandez Oro where she alleged that she had been raped by a family member.

Under the Supreme Court’s provisions, a woman alleging rape is under no obligation to prove the fact that her pregnancy is the result of sexual assault, nor is she required to give the identity of her aggressor. In this case, her sincerity was not put in doubt by Dr. Rodriguez Lastro.

At the Fernandez Oro hospital, the woman’s condition was assessed and she was referred to Pedro Moguillansky Hospital, Cipoletti, for an abortion. She was already over 5 months pregnant. Rodriguez, instead of performing the abortion asked for her to undergo psychiatric screening before coming to the hospital. This was held against him during his trial because it is not a legal requirement, and judged a “dilatory maneuver.” He “never had the intention of performing the abortion,” the judge determined. However, the heading of “obstetrical violence” was not retained against the doctor.

Doctors at Fernandez Oro admitted during the hearings that they then advised the young woman to seek help from a feminist NGO, “La Revuelta”. They also admitted that they never gave complete medical information about their patient to their colleagues in Cipoletti.

Days later, she presented herself at the Cipoletti hospital in severe pain, alleging that she had been given Oxaprost (Misoprostol) in order to induce abortion and asking for the abortion to be completed. Dr. Rodriguez considered that she was at risk of having a serious and even life-threatening infection and administered anti-contraction medication. He was also unable to determine whether she had in fact taken abortion-inducing pills.

Her referral, the doctor recalled, stated that the 19-year-old woman had an unwanted pregnancy: she had a fever and contractions and was carrying a live fetus, with a positive heartbeat. She also brought an ultrasound giving evidence of an advanced pregnancy. She had no dilation or bleeding, the doctor stated.

According to pro-abortion physicians, Oxaprost should in principle be used only during the first weeks of pregnancy, 10 or 12 at the most. In later pregnancies, complications are to be feared.

The woman was then kept in the hospital for two more months so as to reach the stage when her baby would have every chance to survive a caesarian section. According to Rodriguez Lastra, she had agreed to this. The operation took place when she was 7 and a half months along and her baby was born alive and healthy and is now a thriving two-year-old.

The woman was heard during a closed hearing on the first day of the trial.

She was not responsible for the judiciary procedure against Rodrigez Lastra. That was initiated by a legislator of Rio Negro, Marta Milesi, an abortion activist who is responsible for having proposed the current legal abortion provisions in the province.

According to the Argentinian media, the woman in the case went on to have anorexia nervosa and made several suicide attempts, but it also appears that she had mental issues already when she first came to the Fernandez Oro hospital. But rape and abuse by a family member could also be responsible for her condition, pro-life activists in Argentina argue.

Dr. Rodriguez Lastro has received wide support from the pro-life community in Argentina but this was not sufficient to convince the Cipoletti judge, Alvaro Meynet, to find him innocent of any reprehensible act.