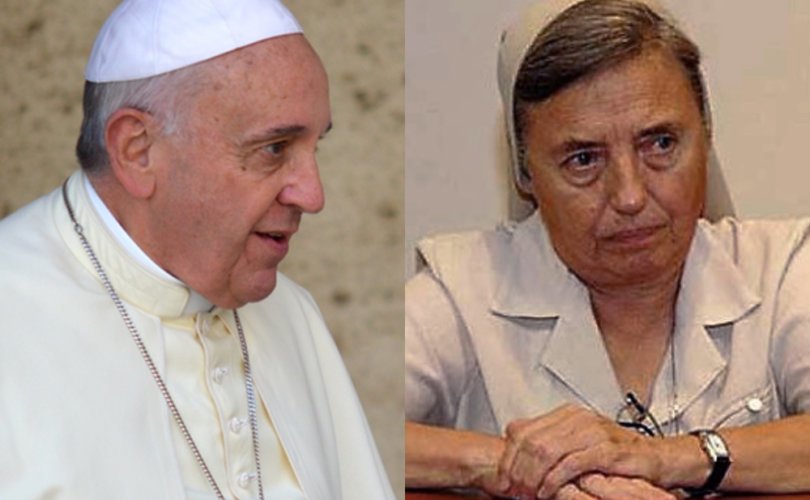 ROME, April 4, 2018 (LifeSiteNews) — An Argentinian religious sister acclaimed for her work against the trafficking and exploitation of children has said Pope Francis told her responsible parenthood requires contraceptives in some cases.

This, despite the Church’s constant teaching that the use of artificial contraception is always intrinsically evil.

The radio interview covered poverty rates, drug trafficking and the decriminalization of abortion in Argentina.

Sr. Pelloni, who is opposed to abortion, said the Pope told her various forms of contraception could be permissible to prevent poor women from choosing abortion. She included condoms, “a diaphragm, and as a last resort, which is what we advise for rural women that we serve, because I have a foundation for the peasantry, tubal ligation.”

Pelloni argued that these methods are neither abortive nor destructive to the woman, despite the fact that tubal ligation is considered a permanent method, with reversal procedures not always proving successful.

“If there is sex education and state responsibility to care for women in poverty, we do not need to decriminalize abortion because it will not be necessary to have an abortion,” the superior of the Carmelite Missionaries said.

The Vatican has neither confirmed nor denied the Pope’s comments to Sr. Pelloni. LifeSiteNews contacted Vatican spokesman Greg Burke for comment but as of this writing has received no response.

Sr. Pelloni is highly regarded in Argentina. In 2013, she was awarded the International “Navarre” Prize for Solidarity, for her work against the trafficking of minors, sexual abuse, and the theft of children for the purpose of organ trafficking.

This is not the first time Pope Francis has approved of the use of contraceptives to avoid pregnancy. On a February 2016 flight, the Pope was asked about “avoiding pregnancy” in areas at risk of Zika virus transmission. “Paul VI, a great man, in a difficult situation in Africa, permitted nuns to use contraceptives in cases of rape,” he said.

“On the other hand, avoiding pregnancy is not an absolute evil,” he added. “In certain cases, as in this one, such as the one I mentioned of Blessed Paul VI, it was clear.” Asked for clarification, the Vatican confirmed that Pope Francis was approving use of “the contraceptive or condom” in certain cases.

According to the Catechism of the Catholic Church, while “the regulation of births represents one of the aspects of responsible fatherhood and motherhood, legitimate intentions on the part of the spouses do not justify recourse to morally unacceptable means (for example, direct sterilization or contraception).” (CCC 2399)

We base Our words on the first principles of a human and Christian doctrine of marriage when We are obliged once more to declare that the direct interruption of the generative process already begun and, above all, all direct abortion, even for therapeutic reasons, are to be absolutely excluded as lawful means of regulating the number of children. (14) Equally to be condemned, as the magisterium of the Church has affirmed on many occasions, is direct sterilization, whether of the man or of the woman, whether permanent or temporary.

Similarly excluded is any action which either before, at the moment of, or after sexual intercourse, is specifically intended to prevent procreation—whether as an end or as a means.

Neither is it valid to argue, as a justification for sexual intercourse which is deliberately contraceptive, that a lesser evil is to be preferred to a greater one, or that such intercourse would merge with procreative acts of past and future to form a single entity, and so be qualified by exactly the same moral goodness as these. Though it is true that sometimes it is lawful to tolerate a lesser moral evil in order to avoid a greater evil or in order to promote a greater good, it is never lawful, even for the gravest reasons, to do evil that good may come of it —in other words, to intend directly something which of its very nature contradicts the moral order, and which must therefore be judged unworthy of man, even though the intention is to protect or promote the welfare of an individual, of a family or of society in general. Consequently, it is a serious error to think that a whole married life of otherwise normal relations can justify sexual intercourse which is deliberately contraceptive and so intrinsically wrong.

They also follow one week after Pope Francis was reported to have told his 94-year-old Italian atheist philosopher friend and founder of La Reppublica, Eugenio Scalfari, that “there is no hell.” The Vatican said that although the two men met, no interview was given and the comments were not a “faithful” transcription of what was said.