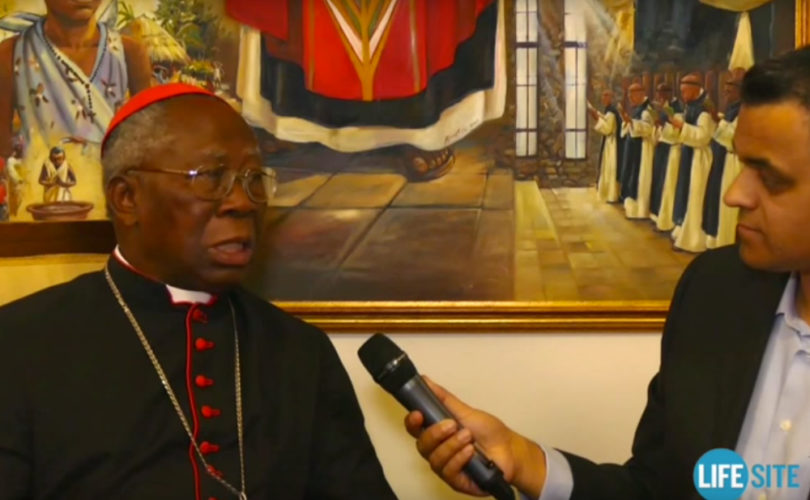 ROME, October 21, 2015 (LifeSiteNews) — Cardinal Francis Arinze of Nigeria strongly defended the Catholic faith against the proposal put forward by one influential Synod Father who said last week that it is “unrealistic” for the divorced-and-remarried to refrain from sexual activity – what the Church following Christ calls “adultery.”

Cardinal Reinhard Marx, archbishop of Munich & Freising and a leading advisor to Pope Francis, had said such activity should be judged according to “lived context,” and that such persons should be able to receive Holy Communion.

However, Cardinal Arinze told LifeSiteNews in a video interview on Saturday, “The Ten Commandments are given to us by God. Have we any authority to say it is ‘unrealistic’ to expect people to keep any of the Ten Commandments, not only number six and number nine, also number five – abortion, killing of innocent people, number seven – stealing, whether small sums of money or big?”

“We cannot go on the reasoning that it is ‘unrealistic,’” added the cardinal, prefect emeritus of the Congregation for Divine Worship and the Discipline of the Sacraments.  “You can say it is not easy. I accept that. Christ never promised us that it is easy to follow him. He said those who want to be his disciples must ‘take up their cross daily and follow me.’”

Last week Cardinal Marx told bishops from around the world gathered at the Synod on the Family in Rome that “we should seriously consider” admitting to the sacrament of Holy Communion civilly divorced and remarried Catholics who have chosen to leave a “canonically valid” marriage.

“The advice to refrain from sexual acts in the new relationship not only appears unrealistic to many. It is also questionable whether sexual actions can be judged independent of the lived context,” he stated in his address. LifeSiteNews asked Arinze to respond to this statement, without telling him whose mouth it came from.

“You might as well tell the man who is walking in the office, and his secretary is a lady, that it is unreasonable to expect them to be chaste,” he said. “Likewise, it would be ‘unreasonable’ to expect people to be honest when they see a chance to take government money, or to take another person's property.”

“If you say, we cannot expect people to be chaste in that situation — to refrain from sexual relations — then you are challenging the fundamental teaching that sexual relations are correct only between husband and wife in a proper marriage, and that between any other two people, it is wrong, whether they are heterosexual or homosexual. It is wrong because it is against the order established by God the Creator.”

The cardinal said that the Catholic position on marriage and the moral norm against adultery is not a human invention that can be amended, but is a “divine law” that comes from God and therefore cannot be changed.

“You cannot name a situation which Christ did not foresee, nor can you tell us that you are wiser than Christ and that you can modify what he has said. We will then ask you, ‘who do think you are? Greater than Christ?’ He is the way the truth and the life,” he said.

Arinze said that nobody, not even the pope, has the power to change the Church’s teaching on marriage and adultery.

“Marriage is not a human invention. God created Adam, and God said, ‘it is not good for man to be alone.’ So, he created Eve. The first man and woman were created by God, which means marriage comes from the creating hands of God. It isn’t the pope who made it; it isn't the United Nations; it isn't the parliament of any nation — no matter how powerful — which means that nobody has the right, or even the power, to reinvent marriage.”

Those Catholics who are civilly divorced and remarried are “technically in a state of sin, even if their conscience excuses them,” he said.

“There is such a thing as a state of mortal sin. Mortal sin is a total turning away from God. It is a terrible thing. It can be in reference to any of the Commandments, not only the sixth and the ninth,” he said.

Someone who is in the state of mortal sin is not worthy of receiving Jesus in Holy Communion, he said.

“If the person is in the state of mortal sin, and receives Holy Communion, the person indeed receives Christ, but no grace…Not only no grace, but the person commits sacrilege on top of the sins the person had before.”

“That's the case where St. Paul said, ‘let the person examine  himself; he who receives unworthily receives judgment against himself.’ That is very severe,” he said.

Coming out of sin

Arinze said that receiving Jesus in Holy Communion when in the state of mortal sin can never be an occasion for helping someone come out of sin.

“To come out of sin the sacrament needed is penance, the one we popularly call confession. You go to the priest; you accept you did evil; you say it is through your fault; and you have determined, with God’s grace, to change. Then you get God's forgiveness. That helps.”

“But if a person is in mortal sin and has no intention of leaving that action, then receiving Holy Communion does not help that person to become better, because sacrilege [has now been added] on top of the sin the person had before,” he said.

The cardinal said that living the Catholic faith authentically is not about “how we appear to other people,” but about “what God thinks of us.”

“All we have said now is about objective right and wrong,” he said, adding that only God alone can judge whether a person is culpable for the sins he or she has committed.

“Not even half a dozen Cardinals will judge that. God doesn't need our help to judge that. So you can see [the Catholic religion] is all about honesty and openness before God, not about what people think of us,” he said.