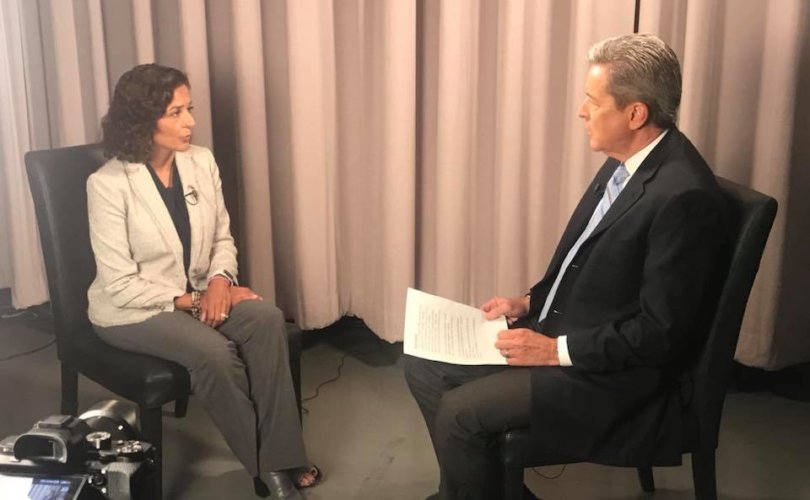 ARIZONA, April 24, 2018 (LifeSiteNews) — Over the weekend, Democratic candidate Hiral Tipirneni declared that she opposes any limitations on abortion, including the current ban on the partial-birth abortion procedure.

“Would you support, for example, a ban on partial-birth abortion?” MSNBC host Kasie Hunt asked Tipirneni during her show Sunday.

“I’m a physician, and I have seen and witnessed women making, or having to face, that choice, that heartbreaking, gut-wrenching choice,” she answered. “And I truly do believe that that is a decision that should be between a woman, her partner, her physician, and her faith.”

Hunt went on to ask if there was any “point at which you do think that abortion should be limited.” Tipirneni responded the she did not “think that that’s something we should be legislating”; instead “we need to let medical professionals make that decision.”

The next day, Tipirneni promoted the interview on Twitter, saying she enjoyed talking about “women's health care and reproductive rights.” Her opponent Lesko says she’s running as a “strong believer that life begins at conception and we must protect the most vulnerable among us,” and touts endorsements from the Susan B. Anthony List and Arizona Right to Life.

In addition to invoking her medical background, Tipirneni claimed late-term abortions are “usually related to a risk to the woman’s life. But according to another physician, former abortionist Dr. Anthony Levatino, “you never need late-term abortion to save a woman's life.” In fact, he argues that spending 2-3 days waiting for her cervix to dilate in a late-term abortion procedure would actually increase her risk by delaying actual life-saving treatment.

During the interview, Tipirneni also suggested that restricting abortion would bring America “back to the days where women are bleeding out in the alleyway,” and argued that “comprehensive sex education” and “access to contraception” were better methods for ensuring that abortion is “safe, legal, and rare.”

In fact, former Planned Parenthood director Mary Calderon estimated in 1960 that 90% of illegal, pre-Roe abortions were performed by licensed physicians, not in proverbial “back alleys,” while a 2005 analysis by FactCheck.org found that the “best available evidence” showed that maternal abortion deaths began sharply declining before states began legalizing abortion, thanks largely to new drugs.

As for contraception and “comprehensive” sex education, many pro-lifers argue that these ultimately increase abortions by promoting the sexual promiscuity that causes unwanted pregnancies in the first place. A 2016 study out of the University of Notre Dame found a link between school condom programs and a 10% increase in teen birth rates.

Lesko is expected to defeat Tipirneni relatively easily. CNBC’s Jacob Pramuk notes that spending from outside groups dramatically favors the GOP candidate, as does early voting. President Donald Trump defeated Hillary Clinton in the district by more than twenty points in 2016. Franks won his final reelection in 2016 with over 68% of the vote. However, Democrats hope that a narrower defeat than usual will signify Republican vulnerability going into the fall midterms.