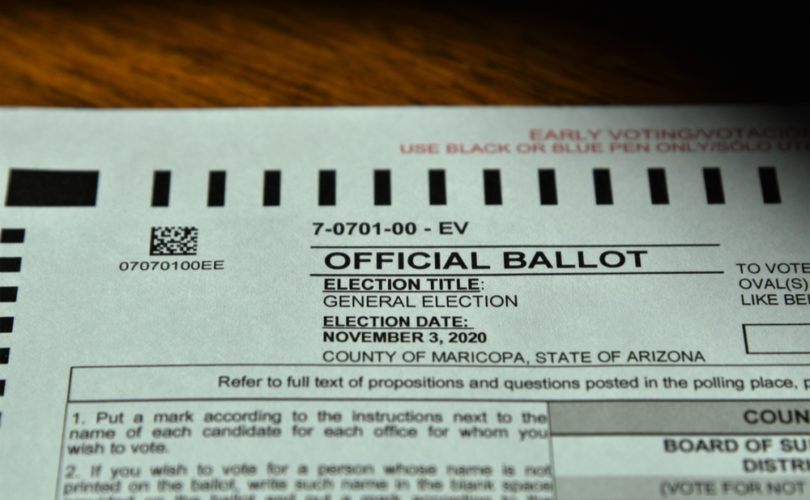 PHOENIX, May 18, 2021 (LifeSiteNews) — Arizona Senate President Karen Fann (R-Prescott) has revealed that data appears to have been deleted from a voting machine in Arizona’s Maricopa County, among other irregularities.

In a letter last week to Maricopa County Board Chairman Jack Sellers, Fann, who ordered the ongoing audit of the 2020 election in the county, said that a database covered by senate subpoenas had been completely wiped out.

“We have recently discovered that the entire ‘Database’ directory from the D drive of the machine ‘EMSPrimary’ has been deleted. This removes election related details that appear to have been covered by the subpoena,” Fann told Sellers.

“In addition, the main database for the Election Management System (EMS) Software, ‘Results Tally and Reporting,’ is not located anywhere on the EMSPrimary machine, even though all of the EMS Clients reference that machine as the location of the database,” she said. “This suggests that the main database for all election related data for the November 2020 General Election has been removed.”

“Maricopa County deleted a directory full of election databases from the 2020 election cycle days before the election equipment was delivered to the audit,” the Arizona election audit team announced on Twitter. They said that the data deletion amounted to “spoliation of evidence.”

In her letter, the senate president noted other “serious issues” that have arisen during the audit, including ballot handling irregularities in Maricopa County and “apparent intent” by county officials to defy legislative subpoenas.

“This lack of organization has significantly complicated and delayed the audit team’s ballot processing efforts,” she continued. “Most of the ballot boxes were sealed merely with regular tape and not secured by any kind of tamper-evident seal.”

Earlier this month, Maricopa County rejected demands to deliver devices used in the 2020 election for inspection as part of the audit, despite being ordered by the senate to do so.

Chairman Sellers doubled-down on that defiance in a public meeting on Monday, vowing not to respond to “any more requests” from the audit process.

“As chairman of this board, I just want to make it clear, I will not be responding to any more requests from this sham process,” Sellers said at the meeting, which was broadcast on YouTube with comments and dislikes disabled, National File reported. “If you find something, anything, that was against the law, or was against our statutory authority, I believe we will be ready to answer that in a court,” Maricopa Supervisor Clint Hickman added.

Fann has invited Sellers and other officials to a livestreamed meeting at the state capitol on Tuesday to discuss the audit team’s findings.

Maricopa County repeatedly has defied lawful Arizona senate subpoenas related to the 2020 election since lawmakers first issued them in December. The county was implicated in multiple election issues last year, like admitting the theft of voter data, as well as potentially illegal election process funding by Facebook CEO Mark Zuckerberg.

The senators’ subpoenas have held up in court despite months of failed legal challenges by Democrats and county officials. Earlier this year, a Maricopa County judge found that the state legislature “clearly has the power to investigate and examine election reform matters.”

“There is no question that the Senators have the power to issue legislative subpoenas,” he ruled, adding that producing “subpoenaed materials would not violate confidentiality laws.”

The Maricopa County audit, which officially launched in April, includes a recount and individual examination of roughly 2.1 million ballots, in addition to a forensic review of voting machines. Around 500,000 Maricopa ballots have been inspected so far, though the audit has been paused this week while the audit venue, the Veterans Memorial Coliseum in Phoenix, hosts other events. The review is expected to pick back up next week and run through June.

Cyber Ninjas, a Florida-based IT firm hired by the senate, is overseeing the audit, and FundTheAudit.com, an organization started by election integrity advocate and former Overstock CEO Patrick Byrne, is working to fund the initiative.