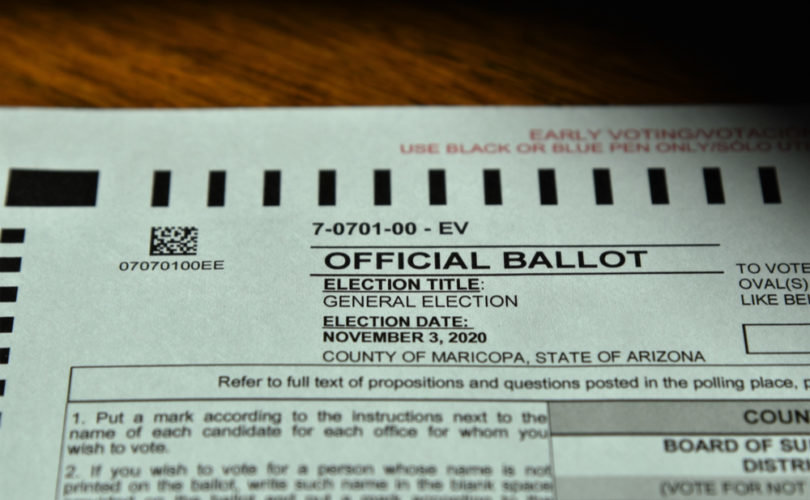 PHOENIX, Arizona, May 4, 2021 (LifeSiteNews) — The 2020 election audit ordered by the Arizona state senate is moving forward despite Democrats’ attempts to obstruct it, said former Arizona Secretary of State Ken Bennett.

Bennett, audit liaison for the senate, told local news on Monday that the review is “ramping up” as the second week of counting begins. The livestreamed audit includes an examination and recount of nearly 2.1 million ballots cast in Arizona’s Maricopa County last year, in addition to a forensic investigation of voting machines and interviews with voters.

Bennett said that between 150,00–175,000 ballots have been tallied so far, although the pace is expected to accelerate in the coming days. “They’re ramping up the personnel needed,” the former secretary of state said, noting that counting tables at the Veteran Memorial Coliseum, the venue for the audit, doubled this week from 20 to 46.

“The first two days were very low counts, but the count is picking up significantly every day,” Bennett said. “We’re doing things that will get us to a number of ballots per day that will allow us to be done with the counting by May 14.”

The coliseum is scheduled to host graduation ceremonies in mid-May, which would require a temporary halt of ballot counting if the election audit is not finished by then. The audit could resume a week later, however, and fair officials have granted access to the site “for as long as we need it,” Bennett said.

The ballot review process, led by Cyber Ninjas, a Florida-based IT firm hired by the senate, involves dozens of volunteer teams, sometimes checking ink or creases or examining ballots with UV lights. Nearly all data from the six truckloads of Maricopa voting machines delivered for inspection have been collected, Bennett reported last week. He told the Gateway Pundit that “now they’ll move into phase two, which is analyzing that data.”

The Arizona senate has pledged $150,000 for the effort, with other funding coming from FundTheAudit.com, which says that it has raised more than $1.2 million of its $2.8 million goal. The group was founded by election integrity advocate and former Overstock CEO Patrick Byrne.

Democrats and Maricopa County officials had sought for months to block the Maricopa audit before it finally launched on April 23. The Maricopa County Board of Supervisors initially had defied subpoenas that the Arizona senate delivered in December, until a county judge sided with lawmakers earlier this year.

Maricopa County Supervisor Steve Gallardo, a Democrat, and the Arizona Democratic Party subsequently sued to pause the audit the day before it started. Maricopa Judge Daniel Martin shot down that challenge as well, in part because Democrats refused to put up a $1 million bond to cover delay costs. Arizona GOP chairwoman Kelli Ward has since warned that leftist activists may still be attempting to “undermine” the audit as observers.

Additional emails released in March revealed that CTCL operatives were given improper access to ballots in Green Bay, Wisconsin –– a key jurisdiction with a similar arrangement.

Republicans have referred to the audit as a means to help draft future legislation and have stated that it cannot legally change the outcome of the election, as Arizona certified the results last year. Patrick Byrne, however, has indicated that the effort could have far greater significance.

“We’re not going to let this happen again, but don’t believe for a minute that 2020 is over yet,” he told NTD Television recently. “There’s all kinds of things from that election that are going to be surfaced in the weeks ahead.”