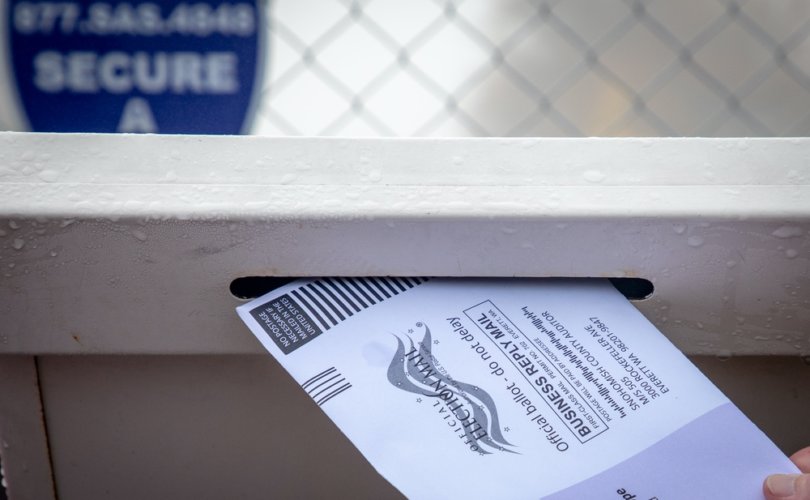 PHOENIX, Arizona (LifeSiteNews) – Auditors and the Arizona state senate yesterday released the long-awaiting findings of the 2020 forensic election audit in Arizona’s Maricopa County, revealing a host of irregularities and tens of thousands questionable ballots that throw into question Joe Biden’s reputed victory in the state.

The findings summary from the final audit report, dated September 24, flagged around 50,000 problematic votes, including 23,344 mail-in ballots cast from voters using a prior address. Another 5,295 votes came from people who potentially voted in multiple counties, while over 9,000 returned votes were not shown as having been sent out, according to the report. Biden’s certified victory margin in Arizona was just 10,457 out of 3.3 million votes.

Other issues discovered by the audit, which began in May at the direction of the Republican-led state senate, included thousands of votes cast by voters found to have moved out of the county or the state ahead of the 2020 election.

“In history of democracies–from ancient Athens to today–ours was the most detailed, demanding, and uncompromising election audit that has ever been conducted,” Senate president Karen Fann wrote in a letter referring the audit report to Arizona Attorney General Mark Brnovich’s office for “further investigation.”

“The audit found that Maricopa County overwrote the entire activity log in its Election Management System,” she noted, adding that Maricopa officials produced “more than 37,000 identical queries” days after a court ordered the county to release election materials to the senate.

Sen. Fann and the auditors also blamed Maricopa County for hindering a more complete investigation by refusing to provide chain-of-custody documentation and by deleting huge swaths of election data, among other things.

“On the ballot side, batches were not always clearly delineated, duplicated ballots were missing the required serial numbers, originals were duplicated more than once, and the Auditors were never provided Chain‐of‐Custody documentation for the ballots for the time‐period prior to the ballot’s movement into the Auditors’ care,” the final audit report by Cyber Ninjas stressed. “This all increased the complexity and difficulty in properly auditing the results; and added ambiguity into the final conclusions.”

“I’m very disappointed to see that Maricopa County refused to cooperate with us,” Fann said at a senate hearing about the audit findings on Friday. “Not only did they not cooperate with us, they even went so far as to sue us.”

A scathing report by CyFIR, another firm involved in the audit, highlighted more than 1 million election-related files purged from Maricopa County election devices before the start of the investigation. 1,064,746 election files and 9,571 directories were deleted from just one drive, and nearly 500,000 files were removed from three scanners, the report noted. Some drives also inexplicably held apparent election data from other states, including South Carolina and Washington.

“By the County withholding subpoena items, their unwillingness to answer questions as is normal between auditor and auditee, and in some cases actively interfering with audit research, the County prevented a complete audit,” a draft of Cyber Ninjas’ report stated.

Attorney General Brnovich, a Republican, said in a statement Friday that he “will take all necessary actions that are supported by the evidence and and where I have legal authority.” “Arizonans deserve to have their votes accurately counted and protected.”

I will take all necessary actions that are supported by the evidence and where I have legal authority.

Arizonans deserve to have their votes accurately counted and protected. https://t.co/KZ8AHqyMmB

Dr. Shiva Ayyadurai, an MIT-educated engineer hired as an audit investigator, also testified on Friday that over 34,000 duplicate ballot envelopes cast by just 17,126 individual voters in 2020 election were counted in Maricopa County. In a presentation for state legislators, Ayyadurai added that thousands of mail-in ballot with blank signatures or “scribbles” should not have passed signature verification, though the county only reported 587 “bad signatures.”

THEN multiple ballots were approved with the same exact name and address, matching signatures, but DIFFERENT voter IDs pic.twitter.com/EGa8Ep3O2R

Preliminary findings released by Cyber Ninjas in July had revealed that “74,243 mail-in ballots where there is no clear record of them ever being sent,” Cyber Ninjas CEO Doug Logan attested at the time. He additionally said that 18,000 people voted in the 2020 election in Maricopa County but were removed from voter rolls after the election and that several thousand voters were not registered by Election Day, but appeared to have been added to voter rolls soon afterwards.

Democrats and local officials repeatedly attempted to block the Maricopa County audit, including with multiple failed legal challenges. Congressional Democrats this week asked Doug Logan to testify before the House Oversight Committee on October 7, after the oversight committee ordered Cyber Ninjas last month to produce communications related to the audit.