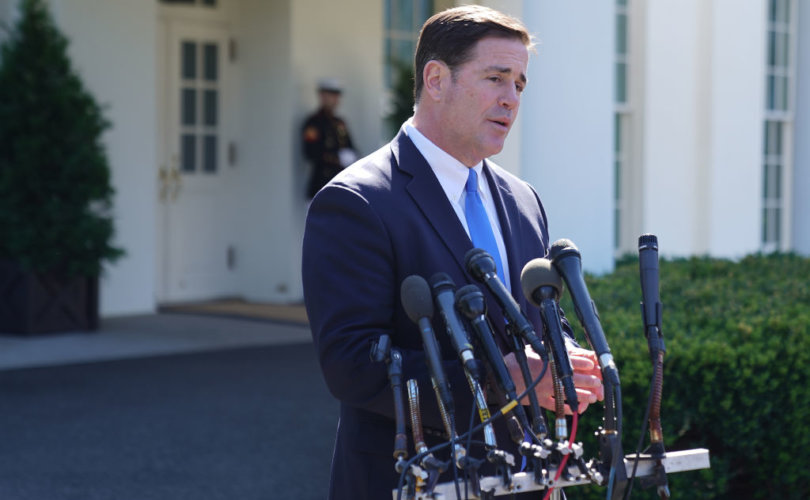 Ducey’s action makes Arizona one of 14 states that have restricted girls’ sports to actual females in recent years and the third to enact legislation protecting minors from dangerous, experimental transgender procedures.

Arizona is the 14th state to protect our daughters' sports.

“Today I signed S.B. 1138 and S.B. 1165, legislation to protect participation and fairness for female athletes, and to ensure that individuals undergoing irreversible gender reassignment surgery are of adult age,” Ducey said in a letter on Wednesday. He described the measures as “common sense.”

SB 1138 bans irreversible “sex change” procedures, including genital mutilation surgeries, hysterectomies, and mastectomies, for children under 18. It doesn’t apply in cases of a “medically verifiable disorder of sex development.” A previous version would have also restricted hormone drugs, but a lone Republican, state Sen. Tyler Pace, blocked it last month.

Transgender surgeries are conducted on underage children across the United States, though LGBT activists often claim otherwise. In a 2018 study in JAMA Pediatrics about mastectomies or “chest reconstruction” for young, gender-confused females, 33 of 68 girls who got the surgeries said they did so before turning 18. Two girls were just 13 when they had the surgeries.

Hysterectomies and genital surgical procedures are also performed on so-called “transgender” minors, according to a report compiled by Child & Parental Rights Campaign. The report identified multiple surgeons in North Carolina and California who openly provide such procedures to minors.

Gov. Ducey noted in his letter that “sex change” surgeries can “dramatically affect the rest of an individual’s life, including the ability of that individual to become a biological parent later in life.” “Throughout law, children are protected from making irreversible decision, including buying certain products or participating in activities that can have lifelong health implications,” he added.

RELATED: Bills in 16 states would save kids from mutilating trans surgeries, but Republicans are blocking them

The sports bill, SB 1165, requires public K-12 schools and colleges and private schools that compete against public schools to designate sports based on sex. Teams or sports designated for females “may not be open to students of the male sex,” the bill states.

Governors in 12 other states have approved bills that ban males from female sports in the last two years.

Ducey on Wednesday also signed a 15-week abortion ban, modeled after a similar Mississippi law before the Supreme Court in Dobbs v. Jackson Women’s Health Organization. The high court is expected to hand down a decision in the Dobbs case this summer and has signaled that it may strike down Roe v. Wade.

We thank Gov. @DougDucey for delivering a swift victory for women and children.

The 15-week abortion limit he signed today will save approximately 900 lives a year by stopping barbaric late abortions in Arizona.

The Arizona ban does not include exceptions for rape or incest, and doctors who violate it could face felony charges and risk losing their medical licenses.

Arizona enacted another sweeping pro-life law last year that prohibits eugenic abortions of babies with disabilities, including Down syndrome. A “trigger” law in the state would prohibit abortion entirely if the Supreme Court scraps Roe.

Another bill approved by Ducey requires voters to show proof of citizenship before voting in presidential elections, the Washington Examiner reported.

I Have Great News:

“In Maricopa County alone, there are currently 13,042 active registered voters who have not provided evidence of citizenship…”

We need this law in all 50 states!

County recorders will have to reject voter registration applications without proof of citizenship under the bill, which left-wing “voting rights” advocates have pledged to challenge in court.