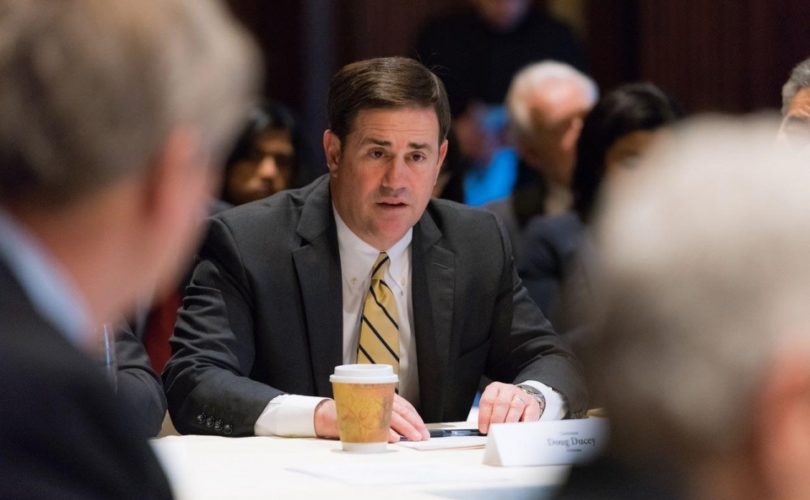 HB 2906 “prohibits the state and any local governments from requiring their employees to engage in orientation, training or therapy that suggest an employee is inherently racist, sexist or oppressive, whether consciously or unconsciously,” the governor’s office said in a press release.

“I am not going to waste public dollars on lessons that imply the superiority of any race and hinder free speech,” Ducey declared. “House Bill 2906 goes a long way towards protecting Arizonans against divisive and regressive lessons.”

The action follows his final approval the previous week for HB 2986, which imposes a $5,000 fine on any public school that teaches “that one race, ethnic group or sex is in any way superior to another, or that anyone should be discriminated against on the basis of these characteristics,” according to a summary from the governor’s office.

CRT asserts that “race is not a natural, biologically grounded feature of physically distinct subgroups of human beings but a socially constructed (culturally invented) category that is used to oppress and exploit people of color”; and that the “law and legal institutions in the United States are inherently racist insofar as they function to create and maintain social, economic, and political inequalities between whites and nonwhites, especially African Americans.”

The doctrine’s spread in public schools has been a topic of growing concern on the Right. Conservatives argue that it stokes racial divisions rather than healing them; former President Donald Trump worked to remove it from federal training programs and publicly advocated its removal from public education. By contrast, one of President Joe Biden’s first acts was to dismantle Trump’s 1776 Commission, which called for educational curricula focused on teaching students to understand and embrace the founding principles of the United States.

The battle has primarily been fought at the state level, however, with several states enacting bans on CRT in public schools (bans that have come under fire by a coalition of left-wing, libertarian, and establishment/anti-Trump Republican voices).

By signing his own critical race theory bans, Ducey may be hoping to win back some goodwill among conservatives lost by his April veto of legislation that would have ensured students did not receive “sexuality, gender identity, or gender expression” instruction unless their parents specifically opted them into such lessons.