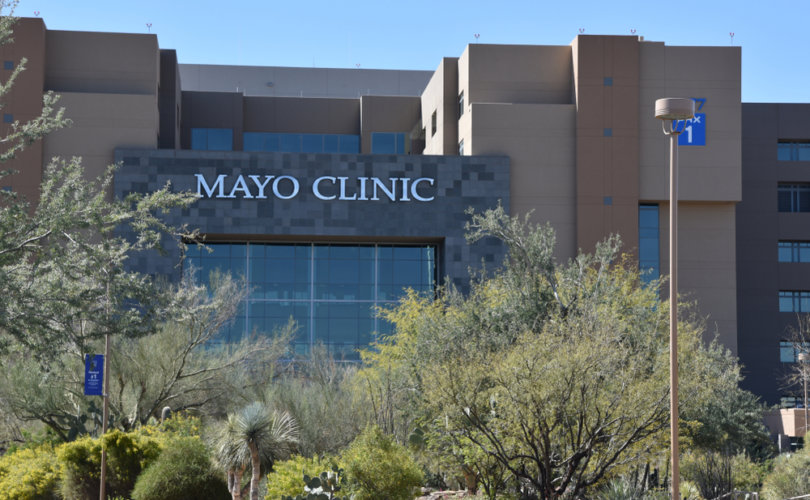 PHOENIX (LifeSiteNews) – An investigation launched into the chief medical officer of the Mayo Clinic of Arizona has been dropped by the Arizona Medical Board following an accusation of malpractice over an elderly COVID patient’s refusal of the dangerous antiviral drug Remdesivir.

Dr. Alyssa Chapital, a surgeon and chief medical officer at the Phoenix-based Mayo Clinic, has been accused of abusing an elderly patient for his refusal to take the controversial drug Remdesivir after being admitted to the hospital with complications involving COVID-19.

Chaptial stands charged with medical negligence by denying therapeutics, hydration, food, and locking the elderly man in isolation for over three weeks, all actions the hospital director allegedly took in response to the patient’s refusal to consent to receiving Remdesivir, a drug which, according to America’s Frontline Doctors, has been known to cause kidney failure and even death.

CMS data indicated that of 7,960 beneficiaries prescribed Remdesivir for COVID‐19, 2,058 beneficiaries died, with 46 percent of those fatalities occurring within 14 days of Remdesivir treatment.

Last week, attorneys representing 14 families brought forward wrongful death lawsuits against three hospitals in California over the prescription of Remdesivir for COVID. The claims allege violations of informed consent owing to the lack of warnings regarding the harmful effects of the controversial drug.

READ: Did Fauci knowingly fast-track approval of drug with deadly COVID-like side effects?

The deadly effects of Remdesivir have been documented since at least 2019, at which time a trial published in the New England Journal of Medicine found that half of the Ebola patients who were given the drug died, leading to the suspension of treatment.

As part of a moving three-minute testimony to the Arizona Medical Board, the patient’s daughter-in-law, Ali Schulz, accused Chapital of depriving care to her ailing father-in-law (to whom she refers as “father” throughout the speech), including breaching informed consent laws.

Schulz explained that during her father-in-law’s hospitalization at the Mayo Clinic, he was “denied all therapeutics and most vitamins, denied all hydration… and nourishment for six days except for one bag of D-5 water that I had to weep and beg for days for him to finally receive.”

She added that her father-in-law was forcibly given morphine “despite explicit refusal of all morphine” and that he “was experimented on without knowledge, let alone informed consent.”

Arguing that Chapital was “actively engaged in lowering the patient standard of care,” Schulz informed the board that, as part of the hospital’s apparent treatment of her father-in-law, staff kept him in isolation for 24 days “despite the Arizona Department of Health guidelines and CDC recommendations at that time [which] were to isolate for 10 days, post onset of [COVID] symptoms.”

The family had attempted to have the patient moved back home, but found themselves blocked by the hospital, who told them that he “is going to die and needs a ventilator.” Schulz noted that after eventually getting her father-in-law out of the hospital “he took ivermectin and he’s fine now.”

“I often wonder if this was so [Chapital] could continue to bill those critical care rates, to offset her repayment amount to the Biden administration of the federal CARES act funding accelerated prepayments she already received?” Schulz opined.

In addition to allegations of malpractice, Schulz accused the hospital of doctoring her father-in-law’s patient record. “On multiple occasions there are discrepancies and contradictions in my father’s record,” she said, arguing that therefore “these proceedings cannot accept the patient record at face value, as I have evidence which contradicts the patient record and shows it may have been altered and falsified, which would taint the proceedings.”

Schulz, who holds medical power of attorney and healthcare proxy rights for her father-in-law, called for “a full public investigation” as a matter of public interest before accusing the Mayo Clinic of abuse by putting profits before patient wellbeing.

“I have reported all of these patient safety concerns. I have provided you with the police report during my father’s stay at Mayo which states, ‘Felony, vulnerable adult abuse.’ I felt most of this abuse occurred directly after and as a direct punishment for our refusal of Remdesivir.”

READ: Shocking court cases show hospitals would prefer that you die rather than take ivermectin and live

Continuing, the attorney explained that “the hospital would have received a roughly 20% bonus on my father’s entire hospital bill had we agreed to Remdesivir, but knowing that Remdesivir caused 53% of patients in the Ebola trial to die of kidney failure, we refused the experimental drug.”

“This is so much larger than just one patient,” she added, “and all those people who died under her watch, I believe they died from a lack of hydration, denial of therapeutics, being experimented on, drugged, and sheer loneliness.”

“I will not let this doctor hide behind administrative procedure, corporate policy or protocol, and cover up the wrongdoing that has happened on her watch. None of this has been patient-centered care,” she charged.

Just days after hearing the emotional testimony, the Arizona Medical Board decided against launching a full investigation into the case.

Dr. Anthony Fauci, chief medical adviser to the president at the time that Remdesivir’s approval was fast-tracked as a COVID treatment, originally pushed to have Remdesivir administered to COVID patients from May 1, 2020, at which point he attempted to discredit the effectiveness of the Food and Drug Administration (FDA) approved drug hydroxychloroquine, saying it was ineffective, dangerous, and could kill COVID-19 patients.

Based on data gathered during the trial against Ebola, which was sponsored by his National Institute of Allergy and Infectious Diseases, Fauci said the drug was “safe and effective.” However, Remdesivir had a 50 percent death rate, compared to 35 percent of two other drugs in the trial – and coupled with serious side-effects, the drug was pulled and research on it abandoned.

Despite the deadly signals and an admission from manufacturer Gilead that “The safety and effectiveness of VEKLURY (Remdesivir) have not been established in pediatric patients younger than 12 years of age or weighing less than 40 kg,” the FDA approved the use of Remdesivir in infants four weeks old and above for the treatment of COVID-19 in April.