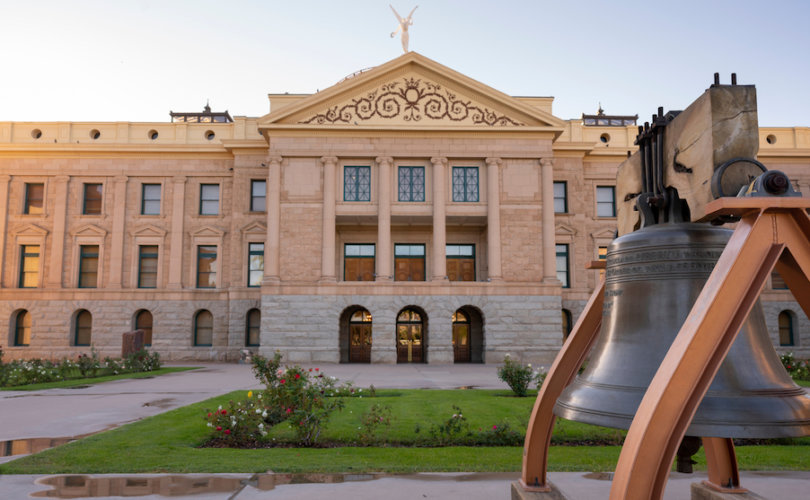 PHOENIX (LifeSiteNews) — Republican lawmakers in Arizona advanced a bill last week that would ban abortions in the Grand Canyon State after 15 weeks gestation. The move comes ahead of the U.S. Supreme Court’s much-anticipated ruling in Dobbs v. Jackson Women’s Health Organization case, which considers a similar 15-week abortion ban passed into law in Mississippi in 2019.

Pro-abortion and pro-life advocates alike have recognized that a decision favorable to Mississippi in the Dobbs case could see the federal “right to abortion” reconsidered or even overturned as early as June.

The Associated Press reported that Republicans on Arizona’s Senate Judiciary Committee voted Thursday to advance the ban after hearing “from nearly a dozen people on both sides of the long-simmering debate” about abortion, including women who said they regretted aborting their unborn babies and others who argued that getting abortions had “saved their lives or futures.”

According to the AP, the lawmakers voted to advance the bill “in case the Supreme Court further limits abortion rights” but doesn’t strike down Roe v. Wade, the highly controversial 1973 decision that established a “Constitutional right to abortion” throughout all 50 states.

Arizona is one of roughly a dozen states that have already enacted “trigger laws” that would work to immediately ban the killing of unborn babies if Roe is struck down. But while the Supreme Court could decide to overrule Roe v. Wade when it makes its decision in Dobbs v. Jackson this year, some analysts have noted that it could take a middle road, upholding Mississippi’s law without overturning Roe.

“Another possible approach would be not to overrule Roe entirely but cut it back so as to uphold the Mississippi statute,” wrote John O. McGinnis, a professor in constitutional law at Northwestern University. “It may seem prudent to move toward the original meaning but go no farther than what is required to decide the case.”

Many pro-lifers have rejected the idea of a compromise, arguing that the Supreme Court ought to use this opportunity to formally reject the legalized killing of unborn babies.

Kristan Hawkins, president of Students for Life of America, has described such an approach as a “worse case scenario” that would still amount to a partial win for defending the unborn but would stop short at the complete reversal of a federal “right to abortion” sought by pro-life advocates.

Last month, lawmakers proposed a bill mirroring Texas’ “Heartbeat Act” that bans abortions after six weeks gestation. Heartbeat bills are tantamount to outright abortion bans since many women do not even know they are pregnant at six weeks. Thus far, the measure has not advanced in the Republican-dominated legislature, but many expect it to proceed along party lines.

Arizona Gov. Doug Ducey has signaled a willingness to support pro-life bills, signing legislation last year making it a Class 6 felony to perform an abortion strictly because of a fetal genetic abnormality.

Arizona also has company when it comes to strategic moves to advance pro-life legislation in anticipation of the Supreme Court’s ruling in Dobbs.

In South Carolina, the Senate voted for a “trigger law” that would position it among the states that plan to immediately prohibit nearly all abortions if Roe is struck down.

In South Dakota, Gov. Kristi Noem introduced two pro-life bill drafts late last month: one that would ban abortions after a fetal heartbeat can be detected and another that would prohibit the distribution of abortion drugs through the mail.

However, despite rapid moves by state lawmakers to advance pro-life legislation and ongoing optimism that the Supreme Court could be amenable to striking down or at least overhauling Roe v. Wade, some legislative proposals have faced difficulty getting off the ground.

Meanwhile in Florida, a similar six-week abortion ban failed to take off and has been generally replaced by the broader 15-week ban that some pro-life advocates say does not do enough to protect the unborn.

Regardless of setbacks, pro-lifers remain optimistic that the Supreme Court is set to deliver a big win for the movement this year, while abortion lobbyists have made clear they too anticipate an imminent reversal of Roe.

In an interview with The Daily Wire’s Michael Knowles, which was uploaded to YouTube on Sunday, Hawkins said the momentum is on the side of the pro-lifers.

“The feeling on both sides, I believe, and I think you can read Planned Parenthood’s panicked fundraising emails and text messages that I get, is that because [the Supreme Court was] even willing to take up the case, it means there is a significant majority willing to reconsider Roe entirely,” Hawkins said.

“This is this final fight, because as Abraham Lincoln said, you have to give freedom to the slave to ensure freedom for the free,” she said. “And if these children, these innocent children, don’t have the freedom to be born, all our freedoms are at stake.”