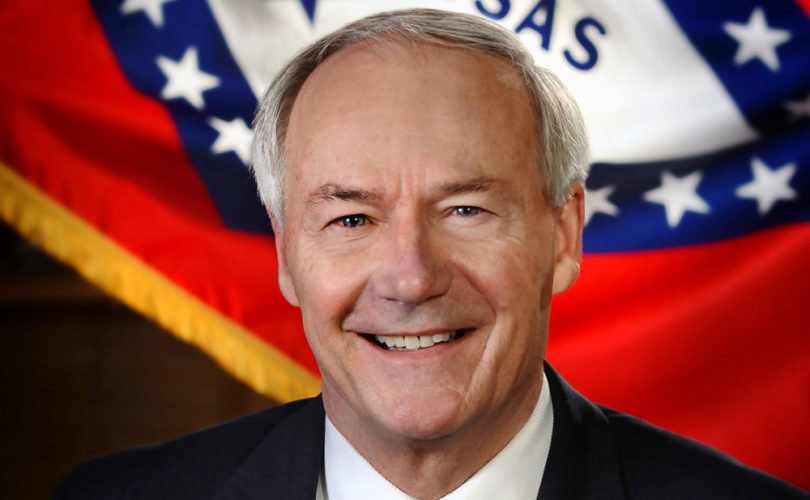 Earlier this month the state legislature voted to pass the Arkansas Human Life Protection Act, which declares it is “time for the United States Supreme Court to redress and correct the grave injustice and the crime against humanity” that is abortion. It provides that after Roe’s central holding is either overruled “in whole or in part” by the Supreme Court, or nullified by an amendment to the U.S. Constitution, legal abortion will be “abolished” in the state except to save a pregnant woman’s life from a “physical disorder, physical illness, or physical injury.”

Abortionists who violate the law would face a fine of up to $100,000 and/or up to ten years in prison. Women seeking abortions could not be prosecuted, and the bill says it would not apply to the use of contraceptives administered “before the time when a pregnancy could be determined through conventional medical testing.”

Hutchinson, who has previously signed a ban on dismemberment abortions and canceled the state’s Medicaid contract with Planned Parenthood, signed the new law late Tuesday afternoon, the Associated Press reports. This makes Arkansas the fifth state to enact such a “trigger law”; another nine still have their unenforced, pre-Roe abortion bans on the books.

Because it wouldn’t take effect until after Roe falls, the Arkansas Human Life Protection Act won’t impact future abortion deliberations at the Supreme Court. Supporters say it’s important to prepare state laws for a favorable ruling they hope President Donald Trump’s judicial nominees will deliver in the near future.

In the meantime, the legislatures of Florida, Kentucky, Mississippi, Ohio, South Carolina, Tennessee, and Texas are currently working to pass bills banning abortion as soon as a fetal heartbeat is detectable, in hopes of provoking legal challenges and instigating such a review.