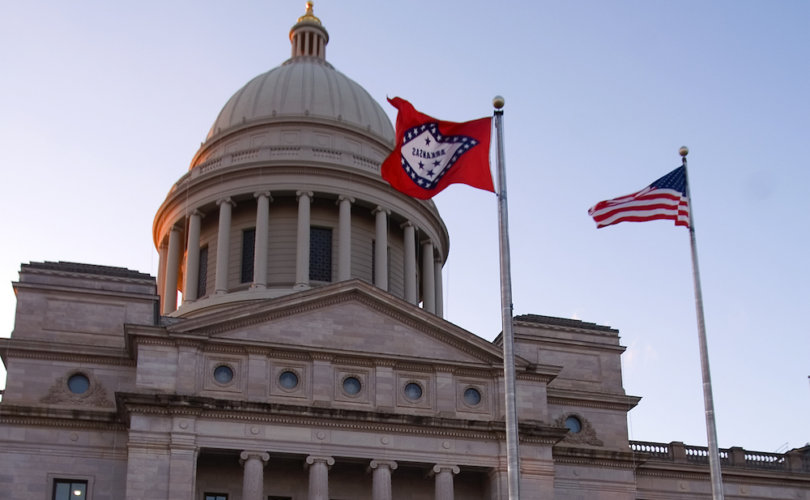 LITTLE ROCK, Arkansas, February 15, 2019 (LifeSiteNews) – The Arkansas House of Representatives voted Thursday to pass an abortion ban that would take effect as soon as the U.S. Supreme Court overturns Roe v. Wade, clearing the way for Republican Gov. Asa Hutchinson to sign it into law next week.

Last week, the state Senate voted 29-6 to pass the Arkansas Human Life Protection Act, which declares it is “time for the United States Supreme Court to redress and correct the grave injustice and the crime against humanity” that is abortion. It provides that after Roe’s central holding is either overruled “in whole or in part” by the Supreme Court, or nullified by an amendment to the U.S. Constitution, legal abortion will be “abolished” in the state except to save a pregnant woman’s life from a “physical disorder, physical illness, or physical injury.”

Abortionists who violate the law would face a fine of up to $100,000 and/or up to 10 years in prison. Women seeking abortions could not be prosecuted, and the bill says it would not apply to the use of contraceptives administered “before the time when a pregnancy could be determined through conventional medical testing.”

Rep. Dan Douglas, a Republican who claimed he couldn’t support it because he was “pro-life, but I’m pro-humanity too,” asked bill sponsor Rep. Mary Bentley whether it would ban abortions for fetal anomalies after 20 weeks.

“Yes sir, it would, and I can tell you that I worked at [Arkansas] Children’s Hospital for a number of years, I worked there for 10 years, and there’s times that we’d save the lives of children that had heart defects that were there in surgery and there were times that we couldn’t,” she responded.

“Miracles still happen, and I’ve seen miracles in this hospital too many times,” Bentley continued, relaying the story of a friend’s sick child and the power of prayer. “I can tell you that Zachary is a healthy little boy of four-years-old and there’s absolutely no medical reason why Zachary is a healthy boy.”

Because it wouldn’t take effect until after Roe falls, the Arkansas Human Life Protection Act won’t impact future abortion deliberations at the Supreme Court. Supporters say it’s important to prepare state laws for a favorable ruling they hope President Donald Trump’s judicial nominees will deliver in the near future. Several states are hoping to instigate a review of Roe by enacting bills that ban abortion once a fetal heartbeat is detected.

According to the pro-abortion Guttmacher Institute, four states currently have “trigger laws” that would automatically ban abortion upon Roe’s invalidation, while another seven have legislatively expressed their intention to restrict abortion as much as the Supreme Court will permit.

A spokesman for Hutchinson told KUAR that the pro-life governor “expects to sign the bill next week.”