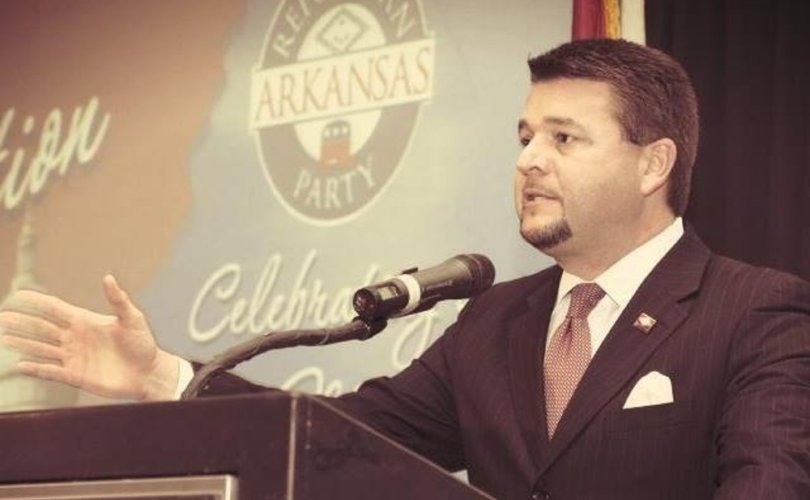 SB 149, the Arkansas Human Life Protection Act, declares it is “time for the United States Supreme Court to redress and correct the grave injustice and the crime against humanity which is being perpetuated by their decisions in Roe v. Wade, Doe v. Bolton, and Planned Parenthood v. Casey.” The Act cites post-1973 advancements in embryology, additional knowledge of abortion’s harm to women, safe haven laws that mean women don’t have to raise babies they give birth to, and increased support for adoption.

The Act provides that after Roe’s central holding is either overruled “in whole or in part” by the Supreme Court, or nullified by an amendment to the U.S. Constitution, legal abortion will be “abolished” in the state except to save a pregnant woman’s life from a “physical disorder, physical illness, or physical injury.”

Abortionists who violate the law would face a fine of up to $100,000 and/or up to ten years in prison. Women seeking abortions could not be prosecuted, and the bill says it would not apply to the use of contraceptives administered “before the time when a pregnancy could be determined through conventional medical testing.”

“The state of Arkansas is clearly a pro-life state and our citizens have spoken clearly time and time again that we should protect the lives of unborn babies,” the bill’s sponsor, Republican state Sen. Jason Rapert said, the Associated Press reports. Three Democrats broke ranks to join every Senate Republican in supporting it.

The state Senate saw a heated debate before the vote, the Arkansas Democrat-Gazette reports. Democrat state Sen. Joyce Elliott raised the scenario of a rape victim whose emergency contraceptive failed; Rapert responded by noting that the vast majority of abortions have nothing to do with rape, and saying a woman in that situation would have “until the time the pregnancy could be medically detected.”

Democrat state Sen. Linda Chesterfield asked if pro-lifers would introduce an “accompanying bill eliminating the death penalty […] Since you're asking folks to value life before birth, should we not be valuing it after?” Rapert retorted that he “was hoping that the same place in somebody's heart that would want to save a murderer who killed an innocent person would be the same place in their heart that they would want to save a little innocent human being.”

Another bill supporter, Republican state Sen. Missy Irvin, relayed her own story of an unintended pregnancy and the result of her choosing life.

According to the pro-abortion Guttmacher Institute, four states currently have “trigger laws” that would automatically ban abortion upon Roe’s invalidation, while another seven have legislatively expressed their intention to restrict abortion as much as the Supreme Court will permit.

The bill now goes to the state House of Representatives, where Republicans hold a 76-24 majority. Republican Gov. Asa Hutchinson has previously signed a dismemberment abortion ban and canceled the state’s Medicaid contract with Planned Parenthood.