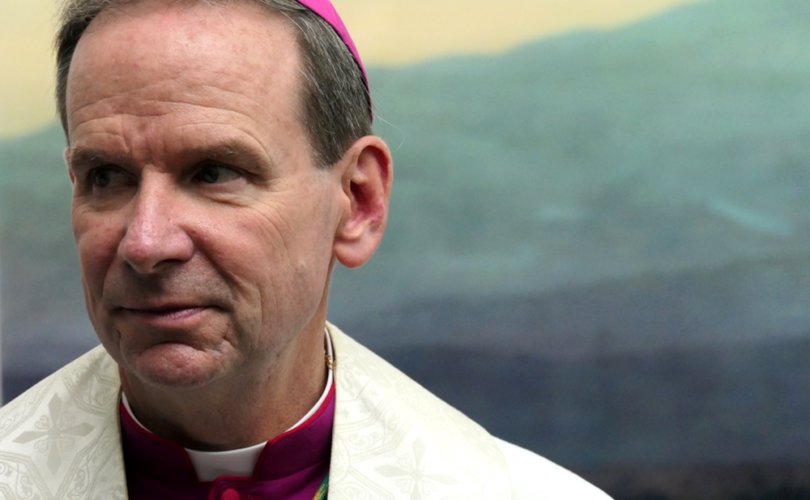 ARLINGTON, Virginia (LifeSiteNews) – Catholics will pray the rosary outside the Diocese of Arlington chancery on September 8, the feast of the Nativity of the Blessed Virgin Mary and the day Bishop Michael Burbidge’s new edict severely restricting the Traditional Latin Mass goes into effect.

“I regret that we didn’t protest back in 2020 when we were locked out of Mass due to COVID, and I resolved that I would never stand idly again when the laity [were] being denied the sacraments,” organizer Andrew Flusche told LifeSiteNews. “I asked friends and family if they knew of any plan to rally on [September] 8 and nobody knew of anything. So, I decided a rosary rally at the chancery was the least we can do.”

“September 8 is the day Bishop Burbidge’s suppression order takes effect to severely restrict Traditional Latin Mass and all the traditional forms of the sacraments,” Flusche stated in a Facebook invitation to the event. “If we don’t take a stand NOW, when will we? The Bishop’s order not only hurts lay Catholics, but also the scores of diocesan priests and deacons who are spiritually nourished by the traditional rites.”

— Article continues below Petition —
PETITION: We won't give any money to liberal bishops who attack the Faith
Show Petition Text
11566 have signed the petition.
Let's get to 12500!
Thank you for signing this petition!
Add your signature:
Show Petition Text

The rally will take place from 3:30 p.m. to 4:30 p.m. Participants will pray for Burbidge to reconsider his new guidelines, under which the Traditional Latin Mass will go from being offered in 21 parishes in the diocese – which is known around the world for its high number of parishes that offer both the ancient rite of the Mass and the Novus Ordo Mass – to a mere three. On top of that, Latin Mass is permitted at five additional non-parish “locations.”

There will be no Old Rite Holy Week liturgies and parishes are banned from listing their Latin Mass times in their bulletins or social media pages.

“I think it’s important to be at the bishop’s office during office hours in the hope that our prayerful witness might actually be seen by the bishop or at least his staff,” said Flusche. “We need to show Bishop Burbidge who his order is hurting.”

Flusche, who is a resident of Spotsylvania County, told LifeSiteNews that his invitation to pray has been met with a “wonderful and encouraging response.”

“This rally is about showing the unity of the faithful in our diocese,” Flusche explained. “We are encouraging all people of goodwill to come, whether they attend the Traditional Latin Mass or not, whether their parish is losing TLM or lucky enough to keep it.”

He pointed to his own personal faith journey within the TLM as the key motivation of his actions.

“I grew up in a good Catholic household, where we drove 45 minutes one way every Sunday just to attend a Novus Ordo Mass where the priest actually believed in the Catholic faith,” recalled Flusche. “When I started to truly discover TLM as an adult, it blew me away. It felt like unearthing a treasure that someone had buried away from our generation.”

He also emphasized that he is “personally motivated by our clergy who cannot speak out due to their awkward position and…obedience” to the bishop.

“The current attacks on the TLM are a critical point for Catholics today. If we don’t stand together in unity now – even though it’s a sacrifice to drive a long distance – the TLM will suffer and maybe be buried again.”

Since Pope Francis released his motu proprio Traditionis Custodes in July 2021, abrogating his predecessor’s universal permission for priests to offer the Old Mass, Catholics around the world have expressed their heartbreak and begged the pontiff to reconsider.

Shortly after the document was released, a group of young Catholics sent a video message to Pope Francis in which they shared their love of the TLM. Several months later, Cardinal Blase Cupich faced protests after announcing restrictions in Chicago.

In May 2022, a group of mothers of traditional priests in France made a pilgrimage from Paris to Rome, where they were received in audience with the Pope and asked him to lift the restrictions on traditional forms of the sacraments.

LifeSiteNews contacted the Diocese of Arlington Office of Communications but has not yet received a response.

Latin Mass restrictions hurt young Catholics like me the most: college student