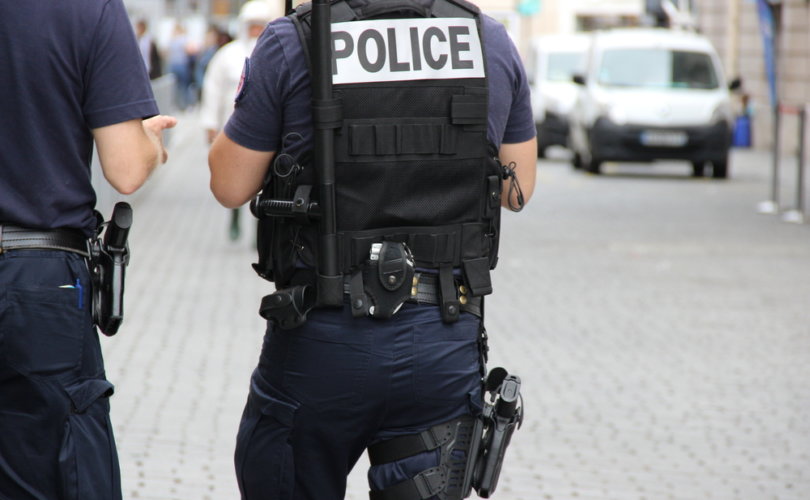 April 24, 2020 (LifeSiteNews) – Four armed policemen entered a Parisian church last Sunday in order to stop what they considered to be an illegal Mass in view of France’s confinement regulations linked to the coronavirus.

The incident caused outrage among French Catholics. The Archbishop of Paris, Michel Aupetit, later said that if this sort of situation were to repeat itself, the French Catholic hierarchy would “speak out, and in case of confinement, bark very loudly.”

The police stormed into the church after having been “warned” by people living close by that a “clandestine” Mass was taking place in the parish of Saint-André de l’Europe, in the 8th arrondissement of Paris. They had heard an organ playing.

Under French confinement rules in force since March 17, places of worship may remain open to the public, but public Masses are forbidden. Funeral Masses are an exception. They are permitted with a maximum of 20 participants.

For the rest, only private Masses are allowed, which can include religious communities but no faithful, except for liturgical and technical purposes when the celebrations are being filmed and broadcast for the benefit of the faithful who are confined in their homes.

Such was the case last Sunday when Father Philippe de Maistre celebrated Mass in the presence of an altar server, a cantor and three parishioners to read the lectures, as well as an organist and cameramen: less than the maximum of twenty, at any rate. The situation was therefore completely legal.

The situation soon became tense as the armed law enforcement officers ordered the priest to stop the celebration and warned him that he would be fined.

“I chose to continue celebrating the Mass, but the police were ordering us to stop,” Father de Maistre told the Figaro.

Luckily, his altar server was himself a policeman who went down the altar steps to engage in dialogue with the officers. The discussion lasted for twenty minutes, at the end of which the police accepted not to fine de Maistre. They did, however, insist that the three parishioners leave the church.

According to the rules regarding the separation of church and state in France, a parish priest is master in his own church and no police, let alone armed police, are allowed to enter such buildings unless called to do so by the religious authority.

Also, a special decree published March 23 regarding the celebration of Mass during the confinement period – which has already led to many Kafkaesque prohibitions against anything from walking alone on a deserted beach to jogging more than 1 km from home – was in fact anything but clear.

The faithful are specifically allowed to go to their place of worship and to enter individually but “reunions” and “gatherings” are prohibited: the presence of less than 10 people in the parish church of Saint-André de l’Europe which can accommodate 500 was certainly not a “gathering.”

As the former chapel of a religious congregation, that particular church, moreover, does not belong to the municipality of Paris according to a law 1907, but to the diocese. By entering the private premises of the church, overzealous policemen actually violated the private property of an association and their entry plainly constituted an “assault” under French law, according to the Fondation du Pont-Neuf, a conservative think tank based in Paris.

Bishop Aupetit of Paris sharply criticized the police during an interview with Radio Notre Dame, the radio station of the diocese of Paris, on Wednesday.

“We are in times that recall certain not very happy periods France went through, such as the (German) Occupation,” said Bishop Aupetit. He ironically underscored that a “good-willed” neighbor had acted as an informer, “warning” the police.

“It is formally prohibited” for armed policemen to enter into a church, he insisted, because the parish priest alone has power of policing in his church: the police may only enter without his permission when there is a “threat to the public order.” In the case of Saint-André, the parish priest had been careful to close the door so that no public would enter.

“They need to keep their heads and stop this nonsense,” the Bishop added. “Otherwise, we will speak out and, in case of confinement, bark very loudly.”

One member of the French National Assembly, Marie-France Lorho, also reacted strongly, in a letter to the French Minister of the Interior Christophe Castaner.

The letter was made public by Mrs Lorho, deputy of the southern département of the Vaucluse, on her website.

In her letter, having recalled the rules about police entry into churches, she stated that the interruption of a religious service constitutes “an extremely grave act” which can even in certain cases amount to a “profanation.”

“No health crisis can in fact justify such an attack on freedom of worship,” she wrote, quoting the March 23 decree that specifically allows private Masses. “Does the minister intend to recall his instructions to his police forces? Does the minister intend to state more clearly than the decree of March 23, that it in no way impedes in any way whatsoever the celebration of Masses behind closed doors? Finally, does the Minister intend to punish the dubious denunciations which are flourishing against religious services?”

There has been no answer to date.

The Saint-André incident was not, in fact, the first of its kind. During the Easter night, the traditionalist parish of Saint-Nicolas-du-Chardonnet in Paris was also targeted by police after neighbors complained that a “clandestine” Mass was taking place: it was in fact the Easter vigil that had been widely announced and was being broadcast via Internet. The film showed that the pews were empty.

The religious affairs editor of the weekly Le Point, Aziz Zemouri, presented the incident as a serious breach of public security regarding the COVID-19 epidemic and claimed that the celebrating priest had allowed a number of parishioners to attend in violation of current regulations. One of those parishioners, wrote Zemouri, had left the celebration at around midnight and warned the police. Many French media picked up the story, with disparaging remarks about the FSSPX parish. The main French semi-public news agency AFP illustrated the story with a photo of the nave of Saint-Nicolas filled with parishioners.

The unlikely story was later denied by the prior of Saint-Nicolas, who also clarified that contrary to media reports he had not been fined. According to some sources it was the police chief who led the intervention who (spitefully) told the story to the press.

Another Parisian church, Saint-Eugène Sainte-Cécile, where traditional “Summorum Pontificum” Masses are celebrated on a daily basis, was also “visited” by the police on April 16 during the 7 PM Mass. On that occasion, the priest having omitted to close the church doors during the celebration, some 15 parishioners had entered the church, staying at the back and respecting rules for social distancing. But their presence was still deemed illegal.

The parish priest went to see the mayor of the “arrondissement” next day and apparently the incident went no further.

One lay Catholic who drove to confess in a monastery near his home in the country shortly before Easter was fined because his travel was deemed “not essential” by local “gendarmes” although visits to one’s place of worship are explicitly allowed by confinement rules on the website of the French Interior Ministry.

An increasing number of priests and lay associations are complaining about the strict prohibition of public Masses in France, while at the same time supermarkets, wine shops, garden centers and public transport are open to the public.

President Emmanuel Macron has announced that partial loosening of lockdown will (or may…) take place on May 11, but has already made clear that public Masses and other religious ceremonies will not be allowed before the middle of June.

He said so in a video conference with faith leaders and heads of Masonic organisations last Monday, shortly after having had a 45-minute telephone conversation with Pope Francis, during which the question of the prohibition of religious services was not addressed, according to a presidential spokesman.

Meanwhile, millions of Muslims living in France will start Ramadan celebrations as of Friday. The Interior Minister Castaner said recently that public celebrations will not be allowed in mosques. On the other hand, the prefect of police of the Bouches-du-Rhône which includes the port of Marseille where large numbers of Muslims live has already said that the police could not “prevent” Muslims living in the same apartment buildings from visiting each other during Ramadan.

Visiting neighbors, under current regulations, normally incurs a fine of 135 euro (about 150 dollars) per offender.