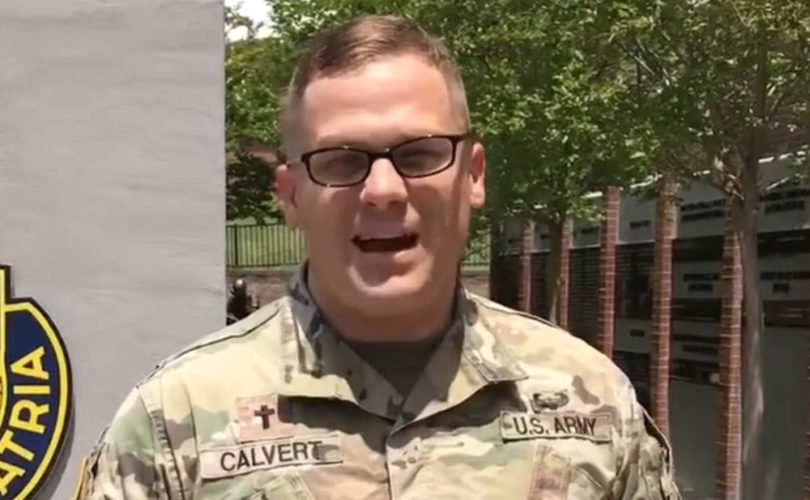 FORT HOOD, Texas, May 21, 2021 (LifeSiteNews) — A group of attorneys has come to the defense of a decorated U.S. Army chaplain who received a potential career-ending reprimand for stating his sincerely held convictions supporting the military’s ban of transgender individuals from the armed services.

First Liberty, which is dedicated “to defending religious liberty for all Americans,” is representing Chaplain Maj. Andrew Calvert, who was sanctioned by his superiors for comments on Facebook opposing the Biden administration’s intentions to revoke President Donald Trump’s ban on “transgendered” men and women serving in the military.

The chaplain objected to the anticipated government policy change. “How is rejecting reality (biology) not evidence that a person is mentally unfit (ill), and thus making that person unqualified to serve. There is little difference in this than over those who believe and argue for a ‘flat earth,’ despite the overwhelming evidence to the contrary,” Calvert wrote in his comment, according to Army Times.

“The motivation is different, but the argument is the same. This person is a MedBoard for Mental Wellness waiting to happen. What a waste of military resources and funding!” he concluded.

Following an investigation, Calvert was issued a General Officer Memorandum of Reprimand (GOMOR) on April 22 by Lieutenant General Robert P. White. Calvert is contesting the reprimand with the help of First Liberty.

In a May 12 letter of rebuttal sent to White, Calvert’s attorney, Michael Berry, expressed how his client wrote his comment “in accordance with his sincerely held religious beliefs” using his personal Facebook account that “disclaims all posts and opinions as his own, and not representative of the Department of Defense (DoD) or the U.S. Army.”

In reference to a previous correspondence, Berry summarized that such a reprimand over Calvert’s expression of “personal views on matters of public concern lacks any basis in law” and that such “retaliation for his expression of his sincerely held religious beliefs is unconstitutional, and violates DoD and U.S. Army regulations.”

Berry also pointed out that Calvert’s expression of his religious convictions and personal views “was, at the time he expressed it, wholly consistent with DoD policy,” since the Trump directive was still in place.

Further, the First Liberty attorney highlighted the hypocrisy evident at a lack of concern over an incident in 2019 when active duty members of the armed services, in uniform, marched in a political parade “to show opposition to the Trump Administration’s ban on transgender troops.”

“Clearly, if uniformed, active duty service members are permitted to express political opposition to their commander-in-chief’s policy, an active duty chaplain may express support for that same policy,” Berry wrote.

Chaplain Calvert has served in the military for 16 years and was deployed to combat zones three times, according to First Liberty. He is a highly decorated major who has “received the Bronze Star and three Meritorious Service Medals,” and enjoys the high esteem of multiple colleagues who have provided statements on his behalf.

Berry concluded his letter to White affirming that such adverse actions against Calvert are not only legally wrong but “morally wrong,” and he requested the Lieutenant General withdraw the GOMOR from his client’s record.

“Should you refuse to do so, we are prepared to take all necessary legal action to vindicate Chaplain Calvert’s rights,” he concluded.

How the Biden administration is politicizing the military