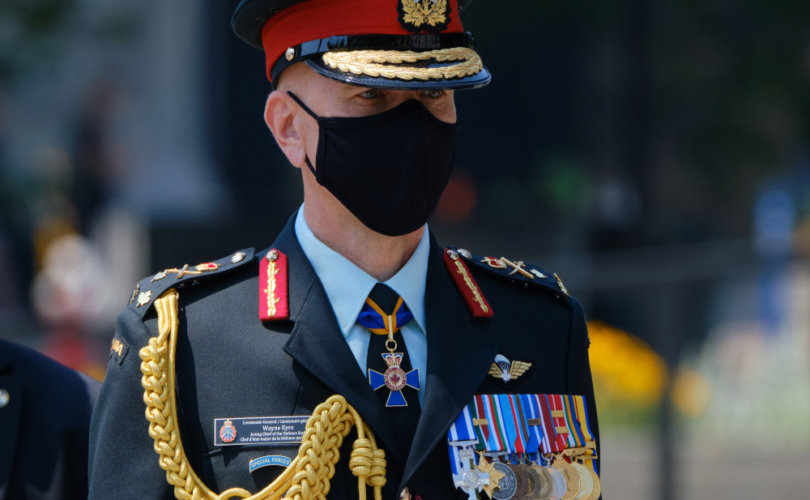 (LifeSiteNews) — General Wayne Eyre, Canada’s chief of the defence staff, refused to confirm or deny whether the country has troops deployed on the ground in Ukraine.

After Global News reported that “sources” say special operations members of the Canadian Armed Forces have been deployed on the ground to help train Ukrainians in their fight against Russia, Eyre told the Canadian Broadcasting Corporation that the military is “never going to talk about discreet or sensitive special operations or confirm or deny them.”

Calling the Global News report and other similar reports “disappointing,” Eyre stated, “If it was true, it would put our troops at risk,” and then questioned why “anyone” would “deliberately want to put Canadian troops at risk?”

Pressed about whether Canadians have the right to know if their own military has deployed soldiers on the ground or if Canadians would be made aware of such a development before its occurrence, Eyre stated, “Every situation is going to be different” and one has to “balance transparency with operational security and try to find that sweet spot in the middle.”

The development that Canada may have troops on the ground comes shortly after Defence Minister Anita Anand announced the CAF is soon going to be sending members to the United Kingdom as part of a larger plan to train Ukrainians.

Asked by Global News whether the report that Canadians were actively engaged in an operation on Ukrainian soil was true, Anand also declined to comment, saying it would be “imprudent” for her to “provide that information.”

Despite the massive coverage given by the mainstream media with respect to the Russia-Ukraine crisis, many remain skeptical of whether news outlets are being transparent about the cause of the war and why Western governments are so eager to aid Ukraine.

This became particularly true after it was revealed that U.S. President Joe Biden and his son Hunter have deep ties to Ukraine, that America was funding biolabs in Ukraine, and that both Putin and Ukrainian President Volodymyr Zelenskyy have ties to globalist organizations.