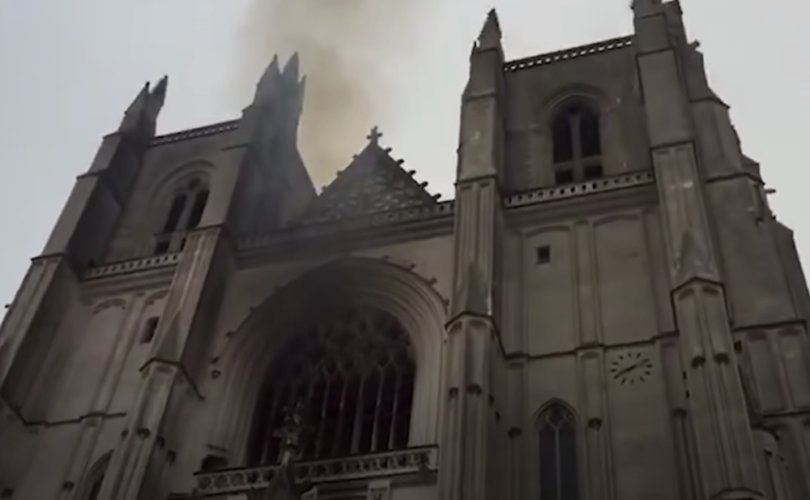 Saint Peter and Saint Paul cathedral of Nantes, in the west of France, was severely damaged in a fire the morning of July 18, 2020YouTube / screenshot

FRANCE, July 18, 2020 (LifeSiteNews) – The Saint Peter and Saint Paul cathedral of Nantes, in the west of France, was ravaged by a violent fire this Saturday morning. The blaze caused severe damage to the inside of the late-Gothic building, completely destroying a beautiful and monumental baroque organ built in the 17th century. It had survived the French Revolution, two world wars, and the fire that destroyed the roof of Nantes cathedral in 1972. Fifteen months after the fire that destroyed the roof and spire of Notre Dame cathedral in Paris, this new tragic conflagration is leading many Catholics to ask whether “Christianophobia” is not to blame for the increase of such incidents.

Repairs to the church are expected to last for at least two years before public worship can resume. A Mass of recollection was celebrated in the nearby church of Saint Nicolas at 6:00 p.m., attended by many parishioners of “Saint Pierre et Saint Paul” who were shocked and saddened by the loss and destruction endured by their church, an elegant and luminous building with an incredibly high nave, built between 1434 and 1891.

While according to the official narrative the Notre Dame fire was an “accident,” a criminal investigation has already been opened in Nantes by the French judicial authorities because no less than three points of ignition of the fire, quite far away from each other, were observed by the firefighters. One was near the organ situated under the large stained-glass window of the façade that was also badly damaged, the two others being in the aisles to the left and right of the cathedral.

These facts point heavily to arson, even though no signs of forced entry have been found. In fact, according to the rector of the cathedral, Father Hubert Champennois, all the doors of the cathedral were closed and locked the evening before at the end of a “very minute inspection, even in the crypt,” as they are every day. An electrical cabinet in the cathedral was also found to be completely destroyed.

Before the end of the morning, the public prosecutor of Nantes, Pierre Sennes, made clear that the possibility of a criminal cause is being taken very seriously. Forensic experts were expected to arrive from Paris on Saturday afternoon in order to determine the circumstances of the fire.

Bishop Bernard Ginoux of Montauban (south-west of France) published his reaction on Twitter soon after the suspicion of arson was made public. “After Notre Dame de Paris and the degradation and desecration of hundreds of Catholic churches, it takes willful blindness not to see an attempt to destroy our Catholic heritage. But who is conducting the operation?” he wrote.

The cathedral of Rennes, Brittany, 100 km north of Nantes, was targeted by arsonists in June of this year: a fire was lit against one of its wooden doors that was partially destroyed by the flames during the night from June 11 to June 12. Thankfully, the damage was relatively slight because the fire was not able to penetrate into the building and was quickly put out by firefighters.

Other fires have hit churches in France these last months and years, including Saint Jacques in Grenoble (south-east) in January 2019, where arson was confirmed at the end of last year and attributed to the “extreme left” by Father Loïc Lagadec, vicar general of the diocese. Another church was badly damaged near Rennes on June 29 of this year, in a fire that spread from the main altar. According to the authorities, an electrical incident was to blame. The church of Saint Paul of Corbeil-Essonnes, near Paris was also hit by a fire two weeks ago: the evidence suggested that it was a case of arson as there were signs of attempted forced entry into the neighboring catechism classroom. Two years before, aggressive tags had been painted on the building.

Attacks against churches and cemeteries are on the rise in France. In many cases, young Satanists are found to be the culprits. In Nantes, there is a flourishing “Antifa” movement that is being pointed at by the social media that has also designated possible “Muslim” perpetrators. Whatever the truth behind these speculations, the rift in the French social order is only too visible and has increased with the recent “Black Lives Matter” movement that is also active in France. Some activists pointed at the fact that Nantes’ prosperity came from the slave trade in the 18th century, when ship-owners made fortunes out of the “Triangular Trade” between the port of Nantes at the mouth of the Loire on the Atlantic, Africa, and the Americas.

At Nantes cathedral this Saturday morning, it was the prompt arrival of the firefighters – 105 men were mobilized – that allowed the damage to be less horrendous than it might have been. The fire broke out at around 7:30 a.m., and was almost immediately noticed and reported by the local inhabitants in the many residential buildings that surround the cathedral as the fateful orange flames blazed behind the stained-glass windows of the façade, destroying the only 16th century original panes left in Nantes cathedral. Minutes later, the fire brigade arrived on the scene while the police kept the public at a distance and the fire was under control by 10:00 a.m. By noon, most of the firefighters had already left the scene, while others stayed to secure stone decorations on the façade that threatened to come down.

An accidental fire caused by workers who were doing repairs to the roof of Nantes cathedral in 1972, leading to a lengthy restoration that kept its doors closed for several years, was followed by the reconstruction of the frame and roof in cement,  a factor that probably preserves the edifice from wider damage that would have been caused if a wooden frame had still been in place.

However, the loss of the historic organ built by Jacques Girardet in 1620 with 27 registers and beautifully tended to and restored over the centuries is complete. Nothing is left of its 77 registers and 5,500 pipes acquired during five complete restorations.

The new French Prime Minister, Jean Castex, as well as the Culture Minister Roselyne Bachelot and the Minister for the Interior, Gérald Darmanin, visited the scene on Saturday afternoon and were able to enter into the cathedral escorted by the firefighters. They spoke of the damage done to the French heritage but also mentioned the profound hurt felt by French Catholics. This was in contrast with President Emmanuel Macron who in a short tweet, saluted “our firefighters who risk everything to save this Gothic jewel of the city of the Dukes.”

Thierry Aillet, diocesan director of Catholic schools in the Vaucluse (south of France), answered on Twitter: “Poor Sir, a cathedral is above all the house of God where Catholic come to receive the Body of Christ in Communion. It is truly the house of God that they are trying to burn.”

Philippe de Villiers, former candidate to the French presidency and founder of the historical theme park of the Puy-du-Fou in Vendée in which due homage is paid to the heroes of the Catholic uprising against the secularist French Revolution and the genocide of the Vendée, noted on Twitter: “The fire in Nantes Cathedral, after that of Notre-Dame of Paris, should make our elites reflect on the present great disorder and great upheaval. De-civilization is underway. During lockdown, the churches were closed. Now they are burning.”