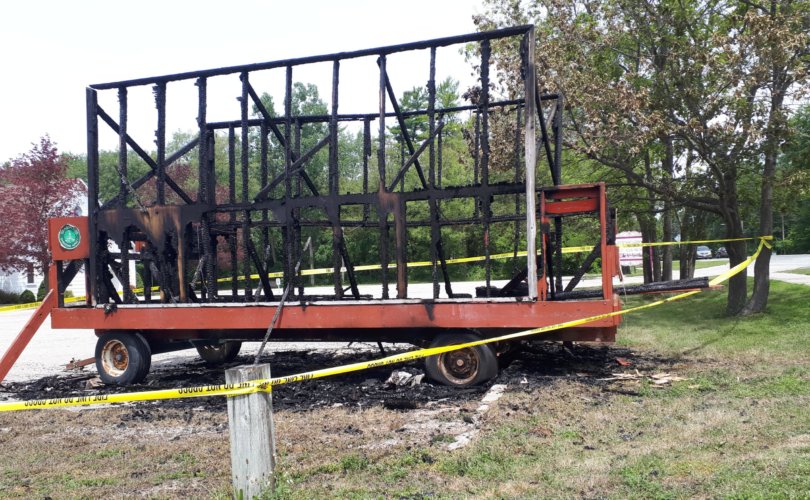 A vandal burned a pro-life billboard outside a Catholic church in Canada.Lambton Right to Life

LAMBTON, Ontario, July 28, 2020 (LifeSiteNews) – A pro-life billboard with a picture of a preborn baby was recently vandalized after being displayed at a Catholic church in Lambton, Ontario. A security camera showed a darkly dressed figure douse the larger-than-life billboard with gasoline and then burn it.

Lambton Right to Life, a local pro-life organization, created the billboard, which compared Canada to North Korea and China in having no legal protection for preborn babies.

“No protection for preborn children,” the sign read. The other side of the sign promoted abstinence as a “Wise Choice” to prevent STIs, abortions, and regrets. The sign, mounted on a large wagon, had been circulating in Lambton for a couple of years.

On July 24, the billboard was taken to Immaculate Heart of Mary Catholic Parish in Grand Bend, Ontario, and placed in the parish parking lot. The next morning, it was found destroyed by fire. The police were contacted and began a search for the vandal. Video footage from a nearby business showed a darkly dressed individual pouring gasoline on the sign before lighting it.

Lorraine Minten, vice president of Lambton Right to Life, told LifeSiteNews that she was “quite upset, but not totally surprised that this has happened.”

“We realize,” she said, “Grand Bend is a hotspot for tourists for most of the summer. No doubt there are people from all over Ontario there.”

She said the billboard was targeted as it “speaks the truth about both abortion and abstinence, as well as the truth about our Canadian political situation and (the) lack of any laws to protect the most vulnerable.”

Minten explained that the sign being on Catholic Church property may have “made it more of a target, especially given current events all over the United States, Canada, and even Europe.” Vandalizing and burning Catholic churches and statues has recently become rampant.

In the past month, churches and statues were vandalized and burned across the United States, with one man being charged with attempted murder. In the early afternoon of May 22, vandals used power saws to decapitate stations of the cross statues in Canada. In western France, arson is suspected as the cause of the fire that broke out in a historic cathedral on July 18.

Minten explained that Lambton Right to Life plans to create another pro-life billboard and a GoFundMe page as “it definitely is an effective way to speak of the importance of these issues and (to) impact the general public.”

“Now more than ever,” she continued, “we need to be courageous in standing up and proclaiming the truth of the culture of life, no matter what.”

“God expects nothing less of the faithful,” Minten said. “We need to pray for courage, prudence and speak the truth in charity.”