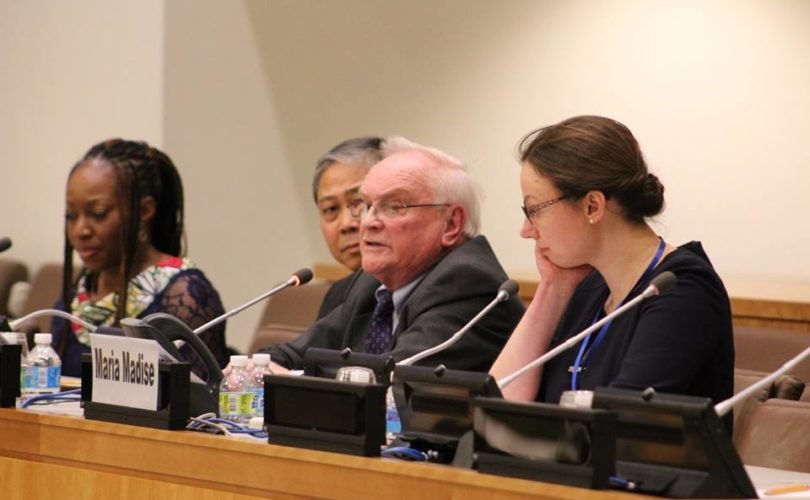 NEW YORK, March 23, 2016 (LifeSiteNews) — Although Africa has the highest maternal mortality rate in the world, an international abortion lobby is diverting desperately needed medical care from African mothers by pushing instead for increased access to contraceptives and legalized abortion across the continent, according to panelists at an event held during the two-week UN Conference on the Status of Women, CSW60, which ends Thursday.

“Most of the African communities actually believe by tradition, by their cultural standards, that abortion is a direct attack on human life,” Obianuju Ekeocha, founder of Culture of Life Africa told about 400 attendees at the March 17 presentation on “Best practise for Maternal Health Care in Africa.”

“So we are torn between that,” and the suggestion from developed nations “who are also donors to African countries,” that legalizing abortion will reduce maternal deaths, noted Nigerian-born Ekeocha.

“So one cannot help but ask, is this not another form of colonization? Is Africa going back to a time when we are going to be told what to do in order to save women’s lives?”

Full video of the Vatican UN event is at the bottom.

Ekeocha was one of three panelists for the event, sponsored by three pro-life NGOs to the UN — Campaign Life Coalition, the UK-based Society for the Protection of Unborn Children (SPUC) and REAL Women of Canada — and hosted by Archbishop Bernardito Auza, the Holy See Permanent Observer to the UN.

“We need access to real prenatal health care, we need skilled birth, we need care and support after birth,” she said. “This is non-controversial.”

“Most of the African communities actually believe by tradition, by their cultural standards, that abortion is a direct attack on human life. … So one cannot help but ask, is this not another form of colonization?”

Panelist Dr. Robert Walley, founder of the Canada-based MaterCare International, pointed out that 91 percent of maternal deaths occur in “the last three months of pregnancy, during labor and delivery,” or shortly afterwards.

“Abortion and birth control are irrelevant.” Yet the “only solution being offered is, if a mother wants to stay alive, she’s got to kill her baby,” he said. “That’s outrageous.”

Walley recalled that in his practice in Canada, he had never had a mother die from a “direct obstetrical cause. But when he arrived in Nigeria in 1982, “I could not believe what I was seeing,” he related.

“We had four maternal deaths the first weekend I was there.”

The major causes of maternal deaths, according to the World Health Organization statistics from 2012, are “hemorrhage, pregnancy-induced hypertension, and then a whole lot of other things, HIV, severe anemia, malaria,” and obstructed labour, Walley said.

But as Maria Madise of the UK-based Society for the Protection of the Unborn Child (SPUC) pointed out, the “abortion lobby has been very successful in creating a false association between ‘safe’ and ‘legal abortion’.”

The implication is that legalizing abortion would decrease maternal deaths, she stated. And at least one UN body made that claim explicit: the Committee on Economic, Social and Cultural Rights released a General Comment on sexual and reproductive rights just before the CSW60, that claimed the “denial of abortion often lead[s] to maternal mortality and morbidity.”

The Millennium Development Goal of reducing maternal mortality by 75 percent has not been met, but “there has been a forceful diversion of resources to the promotion of  abortion and birth control programs that claim to reduce maternal mortality,” Madise noted.

And “women continue to die of mostly presentable or treatable complications in pregnancy and childbirth.”

She pointed out that General Comment has no binding force, and “no human rights treaty recognizes abortion as a human right.”

Moreover, evidence is clear that countries with “restricted abortion” such as Poland, Ireland and Malta, have the lowest rates of maternal death,” noted Madise.

“Eighty percent of the mothers who die are in villages,” Walley stated. “Can you imagine dying of postpartum hemorrhage in terra, because when you see postpartum hemorrhage in our hospital it frightens the life out of the obstetrician until you can control it.” Or the mother could experience obstructed labour, with no access to ambulance or hospital. “Obstructed labour goes on and on and on and on, in agony.”

Moreover, the woman is often delivering her baby alone in her home, he said. “If she’s lucky, there will be a relative; if she’s really lucky, she would have a traditional birth attendant.”

He encountered in Africa something he had not seen in Canada, women with “obstetric fistula” —damage to the rectum and bladder that occurs during obstructed labour.

What usually happens is that the uterus ruptures, the baby dies, and the mother, if she survives, is left “incontinent of urine and feces through the vagina.” Such women are shunned by the community “because they smell and they’re wet, so it’s an awful humiliation.” The WHO estimates there are about one million women in Africa with untreated obstetric fistulae.

MaterCare International is an association of Catholic obstetricians, gynecologists, midwives and general practitioners working to decrease maternal mortality in developing countries, which began with Walley’s involvement in Nigeria and later moved to Ghana, Sierra Leone, and more recently to Kenya.

They have set up a maternity clinic, and train traditional birth attendants, who are often illiterate, to use visual illustrations for prenatal charting and to know when to transport high risk mothers to hospital.

The hospital is equipped to perform caesarean sections, and surgery to correct obstetric fistulae.

In Kenya, “we have little motorbike ambulances” and “parish maternity centers” but “we need at least three,” Walley said. And they could use a helicopter.

“I have to say something,” he noted in conclusion. “It’s a plea. We’ve been turned down by the Canadian government for funding 10 times, not on the substance of what we are doing, but on the technicalities of a proposal which is enormous, with umpteen sections on the environment and all the rest of it.”

“You know that anger gets you, and you say, ‘Look, I’ve got to do something, not change the world, just to make a bit of a difference some way, just to breathe some life back into obstetrics and maternal health care so it’s not just all death and despair’,” Walley said.

“Enough of talking in the abstract, shedding crocodile tears. We have to get on with it.”

Matthew Wojciechowski, head of CLC’s NGO delegation to the UN, noted that having the Holy See host the event was hugely significant.

It meant the presentation was held in the main UN headquarters, rather than relegated to a side building as an NGO-sponsored event, and was open to delegates, who are this week negotiating the final document to come out of CSW60, the theme of which is “Women’s empowerment and its link to sustainable development.”