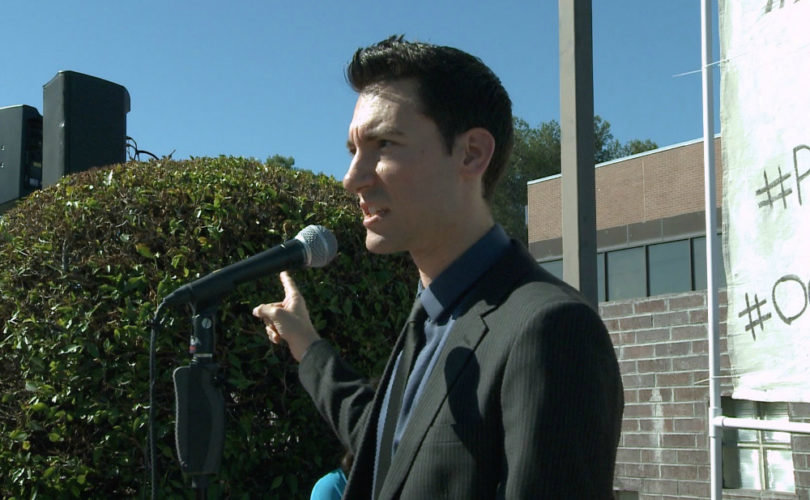 SAN FRANCISCO, California, July 8, 2016 (LifeSiteNews) – A federal judge gave the pro-life investigator behind undercover videos exposing Planned Parenthood for trafficking in human remains somewhat of a mixed bag in court this week, questioning a claim of racketeering against him by the abortion giant but also signaling possible denial of a motion to dismiss based upon the issue of free speech.

Planned Parenthood alleges under the Federal Racketeering and Corrupt Organization (RICO) Act, a law intended to prosecute the mafia, that David Daleiden and the Center for Medical Progress (CMP) cost it millions of dollars via an increase in the cost of doing business by setting up Biomax as a fetal tissue company front resulting in the CMP undercover video footage of the abortion behemoth’s leadership discussing the harvesting and sale of fetal organs.

U.S. District Judge William Orrick questioned whether the abortion giant would prevail in its argument in a Wednesday hearing, Courthouse News Service reports, and indicated Planned Parenthood might have fallen short of establishing that CMP investigators had intended to defraud it of money or property when they posed as Biomax employees.

Daleiden was represented at the hearing by St. Thomas More Legal Society on two federal charges for the RICO violation and wiretapping, and by Life Legal Defense Foundation for 13 state-level violations in various U.S. states.

Orrick at first said he was “inclined to deny” LLDF’s anti-SLAPP motion but then decided to reconsider, the group said, after LLDF attorney Katie Short argue that Planned Parenthood failed to provide the necessary evidence to support its claims against Daleiden.

A SLAPP, or Strategic Lawsuit Against Public Participation, is an impermissible lawsuit filed solely for the purpose of harassing, intimidating, and silencing a defendant.

LLDF argued that Planned Parenthood was seeking tens of millions of dollars in damages and attorney fees from Daleiden and his fellow investigators for the purpose of punishing Daleiden for releasing the videos, and to intimidate him and others from conducting further investigations.

Overall, Daleiden’s attorneys were encouraged by the hearing’s outcome.

“We had a pretty positive day here,” St. Thomas More attorney Peter Breen said in a CMP video. “We had some recognition by the judge at the beginning of the hearing that there are some weaknesses to the plaintiff’s case, particularly with the key area of RICO.”

The RICO claim has been used by the pro-abortion side against pro-life advocates for decades, Breen continued, but another major concern was the effort by the abortion to silence pro-lifers for what is accepted across the board as “standard undercover journalism tactics.”

“One of the real issues is the other side is trying to turn the First Amendment-protected activity of undercover journalism into a racketeering activity,” Breen stated. “It’s never been done before; it shouldn’t be done in this case, and we’re seeing some positive movement there.”

Planned Parenthood has steered way from alleging the content of CMP videos is false, Short said, trying instead to argue its damage claim under other causes of action such as fraud and illegal taping.

“The claims are all founded on the idea that ultimately their damages are the fact they were, as they put it, smeared, and we put it, exposed,” Short said. “All of that is First Amendment-protected activity, and the precedents are very clear that you can’t get damages for what people say about you unless you’re going to prove that its false and that it was malicious.”

“We’re hoping to expose that,” Short continued. “Either come out and fight fair, which is — you want to say anything we said was false, go ahead and give it a try — but otherwise, pack it up and go home.”

Starting last July, CMP released a series of videos showing Planned Parenthood officials discussing the harvesting and sale of baby body parts, along with apparently discussing how they alter the abortion procedure to procure intact babies, both of which are a violation of federal law.

This prompted a national backlash against the nation’s largest abortion provider, along with numerous state and federal investigations into its possible illegal profit from the sale of human organs.

The abortion industry turned to political advocates to lean on Daleiden and his associates, including an April raid on Daleiden’s home where agents from the California Attorney General's office confiscated all of his undercover video footage of Planned Parenthood's harvesting and sale of aborted babies' organs and tissue.

The raid was criticized as political on the part of California Attorney General Kamala Harris, who took tens of thousands of dollars in campaign contributions from Planned Parenthood toward her campaign for the U.S. Senate as a Democrat, and a move to intimidate pro-lifers.

The Planned Parenthood civil suit charging CMP with violating the RICO statute is just one among the many legal threats targeting the CMP, Daleiden and Merritt in response to their blowing the lid off of the abortion giant’s trafficking in human remains from children aborted at its facilities.

A Houston grand jury, convened to hear charges against a local Planned Parenthood affiliate, instead indicted Daleiden and Merritt for using a false ID and attempting to purchase human organs, charges for which they could face 20 years in prison.

Attorneys for Daleiden and Merritt filed a motion to dismiss the charges in April, leading to Planned Parenthood attorney Josh Schaeffer admitting to colluding with the Houston prosecutor’s office, and Harris County District Attorney Devon Anderson admitting her office violated the law in its handling of Daleiden’s indictment, yet still writing the violation off as “minor and harmless.”

Houston prosecutors dropped one of two charges against David Daleiden, a misdemeanor count of trafficking in human organs, in June.

The National Abortion Federation sued Daleiden and CMP in California last December to block the release of undercover videos of the NAF annual meeting, some of which include some of the Planned Parenthood fetal organ trafficking discussions, but also further embarrassing video of abortionists, with much of that footage having since been leaked online.

Daleiden was enjoined from releasing the videos, and that order is on appeal in the Ninth Circuit.

And U.S. Attorney General Loretta Lynch — recently criticized for her private meeting with former President Bill Clinton, a conflict of interest during Lynch’s office’s investigation of Clinton’s wife, Democrat presidential candidate Hillary Clinton, who has since been given a pass by the FBI — has promised to investigate Daleiden and CMP at the federal level.

Breen said the First Amendment principle is much broader than just this case, making winning key for preserving the ability of U.S. citizens to govern themselves, along with holding politician and bad corporate actors in check.

Orrick did not indicate when he would issue an opinion on the motions, according to LLDF, and the group anticipates a decision in the next few weeks.