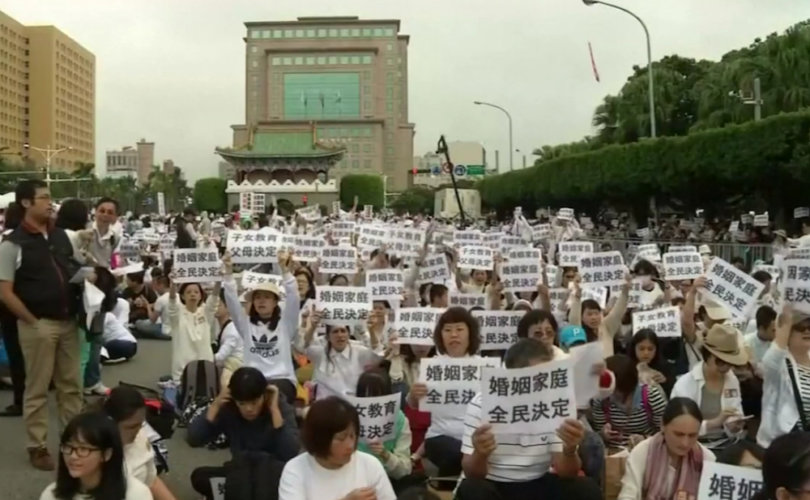 In recent elections, the Democratic Progressive Party (DPP) was voted into power and for the first time in Taiwanese history now has majority control of Parliament.

In October, one of the first initiatives of the DPP was to draft a gay “marriage” bill, brought to Parliament (along with other gay marriage legislation proposals) in early November.

On November 17, pro-family and pro-natural marriage advocates took to the streets, protesting the proposed legislation and demanding that the issue be put on a nationwide citizen ballot. More than 20,000 pro-marriage and pro-family Taiwanese citizens marched through the capital, blocking traffic outside Taiwan's legislature for six hours, many holding signs reading “Marriage and Family: Let All The People Decide!”

While there was no agreement to a nationwide vote, late in the day (after a few demonstrators scaled the wall and staged a sit-in just outside the legislative chamber) legislators agreed to hold two public hearings on same-sex “marriage.”

The first public hearing — “public” in the sense that it was streamed online — was held November 25. Twenty-four experts — 12 for and 12 against — were given 10 minutes to speak.

At the first hearing, Buddhist Master and Hsuan Chuang University Professor Shih Chao-hwei said homosexual behavior is not a “sin.” “From the perspective of Buddhism, all desires are inherent and cannot be defined as either virtuous or sinful. Buddhism does not see coupling as evil,” Chao-hwei said.

The second public hearing on November 29 was occasioned by a pro-gay demonstration of 10,000 Taiwanese.

At the second hearing, opponents of the proposed bill argued that Taiwanese law should give gay couples various legal rights, including emergency-room visitation and inheritance rights, but not redefine marriage. Gay activists countered that homosexuals want full “equality” with legalized marriage, including adoption and parenting rights.

Also at the second public hearing, National Chengchi University professor Hsu Mu-yen, an opponent of the gay legislation and a priest, brought up the health impact of affirming sodomy. “Statistics show that sexual intercourse between two males is the main cause of the spread of AIDS in the nation, which has made the top 10 causes of death among Taiwanese teenagers.”

In a rebuttal, the Taiwanese Health and Welfare Ministry (HWM) issued a statement claiming that “connecting AIDS with sexual intercourse between two males is discrimination against AIDS patients.” The HWM avoided Mu-yen's point by generalizing the reason for the spread of the AIDS virus: “The main cause of the rise of AIDS cases in the country is unsafe sex.”

Children's rights advocate Katy Faust spoke at the second hearing, sharing the story of her upbringing and decision to become an activist for children's rights. Faust's mother has been in a relationship with another woman for 30 years.

“Children have a right to a father and a mother,” she said.

Faust told LifeSiteNews, “I spent the week traveling around Taiwan speaking with pastors, parents, and citizens in the four largest cities in Taiwan. We discussed the impact that redefining marriage has on the rights and well being of children.”

“The two versions of gay marriage law being proposed both remove references to 'mother' and 'father' in Taiwanese law, which makes the link between redefining marriage and redefining parenthood crystal clear,” Faust explained.

On December 3, supporters of traditional marriage held rallies across Taiwan, attracting participants in Taipei of about 150,000, and another 80,000 in other cities.

Organized by Taiwan Family, the stated three-fold purpose of the December 3 protests was to stop same-sex “marriage” legalization, to remove “gender fluidity” from school curriculum, and to push for “new legislators who better represent the many voices of the Taiwanese people.”

“Parents were especially concerned that the redefinition of marriage would validate and encourage an already shocking pro-LGBT sex-ed program,” Faust told LifeSiteNews.  “The Taiwanese people are both courteous and tolerant, but parents have been stunned at the graphic nature of the sex-ed programs and they fear that redefining marriage will result in further radicalization of school curriculum.”

She added that many Taiwanese feel the DPP party has betrayed them in order to gain approval from the West by pushing a homosexual agenda. She said a widely-held belief is that a majority of Taiwanese support traditional marriage but were too afraid to voice their opposition.

“The Taiwanese that I spoke with hoped for a referendum because … if the whole country were allowed to vote, the silent majority of traditional marriage supporters would prevail,” Faust said.

Faust also spoke at the December 3 rally in Taipei, emphasizing the well-being of children. “Marriage is primarily how we safeguard the rights of children,” she explained, and being raised by both father and mother gives each child “distinct and complementary benefits.”

Students shared their increasing fears of persecution, ridicule and punishment over their view of marriage as between a man and a woman. “Rainbow Terror” is prevalent in schools, they said, and it pressures students to agree with politically-correct views favoring homosexuality and gender fluidity.

Nicole Yu, a self-described Christian lesbian, told the South China Morning Post she hoped same-sex “marriage” would pass so her parents would feel freer to tell people that she is gay. “The Bible does not oppose same-sex love,” she claimed.

Faust expressed concern for the future. “The traditional marriage protests made an impact, and legislators were considering granting same-sex couples some accommodations without redefining marriage, but since the December 10 pro-gay marriage rally, they seem more determined than ever to push it through,” she told LifeSiteNews. “The media, the government, and the schools do not give equal air time and exposure to the pro-traditional marriage argument.”

Nevertheless, the crisis has brought social conservatives from across the religious spectrum together, Faust told LifeSiteNews. “While Christian pastors were at the forefront of the opposition to gay marriage, Buddhist and Taoist leaders have now joined in and voiced their opposition to the proposed law,” she said. “Whether or not the law passes, conservatives in Taiwan have been awakened to the reality that they cannot remain silent, despite whatever personal cost comes with speaking up.”

On Monday, DPP Caucus Whip Ker Chien-ming promised that legislation legalizing same-sex “marriage” by altering the civil code “will be passed” when the committee, where it currently is stalled, meets again on December 26. If Ker's prediction is accurate, the proposal will proceed to a third reading in the general committee.

Traditional marriage supporters were planning another rally when that committee meets December 26.

While the push to redefine marriage has begun in other Asian countries such as in Hong Kong and Mainland China, the proposed legislation would make Taiwan the first Asian nation to legalize gay “marriage.”

“If Taiwan can successfully advocate for the protection of children’s rights through marriage policy, it will set an example for the rest of Asia on how to fight this battle effectively,” Faust concluded.