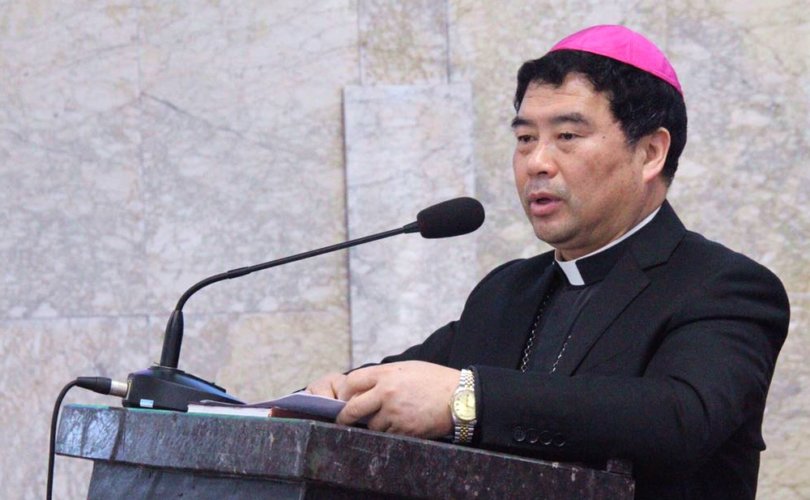 CHINA, March 29, 2018, (LifeSiteNews) – A Chinese bishop, detained by government authorities Monday night for refusing to cooperate with the communist regime’s directives regarding Holy Week liturgies, has been released.

Mindong’s Bishop Vincent Guo Xijin, held in police custody overnight, was returned to his home the following day, according to an AsiaNews report.

Representatives of the underground Church in China say Bishop Guo had been taken away for refusing to concelebrate the Easter liturgies with “Bishop” Zhan Silu, an illegitimate and excommunicated bishop approved by the Chinese authorities.

Earlier this year Bishop Guo was asked by the Vatican to cede his office to Zhan. According to the proposed agreement, Guo was to assume the title of auxiliary bishop of the diocese. At this writing, Zhan remains excommunicated.

Bishop Guo “was taken away because the unofficial community of Mindong – the majority of the faithful and priests of the diocese – had organized an early Chrism Mass,” continues the AsiaNews report. “The police seized Msgr. Guo to stop him from presiding over the celebration. Allowing him to return home yesterday, they banned him from celebrating any Mass as a bishop, as he is not recognized by the government.”

As Holy Week approached, rumors swirled throughout the Church that a deal between communist China and the Vatican is “imminent.”

In order to squelch the rumors and satisfy curious journalists, the Holy See’s Press office issued a statement on Holy Thursday denying media reports “that the Vatican is on the verge of signing an agreement regarding the status of the Catholic Church in China,” according to Vatican News.

Vatican Press Director Greg Burke indicated that there is no “imminent” signing of an agreement between the Holy See and the People's Republic of China.

He added that the Holy Father remains in “constant contact” with his advisors on the Church in China as dialogue continues.

China’s leading prelate, Cardinal Joseph Zen, sounded the alarm earlier this year, warning that the Vatican “is selling out the Catholic Church in China​” and that it is “giving the blessing on the new…schismatic Church” created by the Communists.

“So, do I think that the Vatican is selling out the Catholic Church in China? Yes, definitely, if they go in the direction which is obvious from all what they are doing in recent years and months,” the 86-year-old retired Bishop of Hong Kong wrote in a January 29 letter addressed to “Friends in the Media.” In this letter, he confirmed a report that the Vatican had asked legitimate Chinese bishops to step down in favor of communist-picked “bishops.”

Cardinal Zen outlined how the Vatican’s capitulation to China’s communist regime is only making the regime clamp down harder on faithful Catholics.​

“The Communist Government is making new harsher regulations limiting religious freedom. They are now strictly enforcing regulations which up to now were practically only on paper,” he wrote.

Cardinal Zen’s warnings are proving to be accurate as, “bishops and underground communities are being targeted and pushed to join the Patriotic Association,” according to the AsiaNews report.

“At the beginning of March, Msgr. Julius Jia Zhiguo, underground bishop of Zhengding (Hebei), was taken away by the police to avoid, by pain of threat,” says the report, “him commenting on the dialogue between China and the Vatican with foreign journalists in Beijing who were covering the National People’s Congress.”