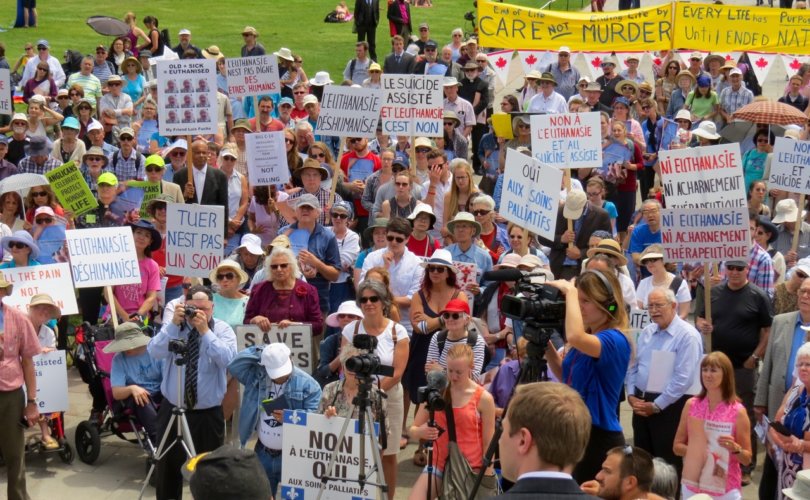 OTTAWA, June 7, 2016 (LifeSiteNews) — With the Supreme Court deadline permitting assisted suicide and euthanasia passed with no law in place, eyes are on the Senate, which may fundamentally overhaul the Liberals’ controversial euthanasia bill during third reading debate, expected to begin Wednesday afternoon.

So high the interest and so wide the divergence of opinions among senators on Bill C-14 that the Senate’s legal and constitutional affairs committee quickly wrapped up a clause-by-clause study Tuesday by deciding to forego proposing amendments.

Rather, any and all interested senators can put forward amendments at third reading.

“I say this is extraordinary because I have never seen in my history on the Hill of more than 40 years a situation where so many senators or members of Parliament wish to participate and a great many of them wish to put forward amendments,” Conservative Senator George Baker, the bill’s sponsor, told the committee.

Allowing senators to propose amendments at third reading would “avoid the duplication and relitigation of practically every clause and proposed section of the bill,” he noted.

“In this case, people are so engaged we kind of need a group effort,” Jennifer Harnden, director of policy for Conservative Senator Don Plett, told LifeSiteNews.

The Senate caucus leaders —  Conservative Claude Carignan, Liberal James Cowan, and Trudeau’s representative Peter Harder — are “trying to find some coordinated way around this,” she said.

“It certainly doesn’t take away from any amendments,’ Harnden added, and “probably makes them stronger” because they will be debated by the full Senate.

Of the 86 sitting senators, 42 are Conservatives, 23 are independent, and 21 identify as Liberal.

Objectors to Bill C-14 hail from all parties, though they object for differing reasons. Liberal Cowan, Conservative Kelvin Ogilvie and independent Frances Lankin are among those who argue Bill C-14 is unconstitutional because it narrows eligibility criteria for euthanasia and assisted suicide more than the Supreme Court intended in its February 2015 Carter ruling, as they reiterated in a CBC debate.

Liberal Serge Joyal also denounced the bill as too narrow.

The Supreme Court ruled in Carter that competent adults with a grievous and irremediable medical condition that causes intolerable suffering cannot be prevented from accessing assistance in committing suicide or being euthanized.

Bill C-14 defines “grievous and irremediable” as a serious and incurable illness or disability that causes intolerable suffering, with the individual in a state of irreversible decline and natural death reasonably foreseeable.

On the other side, Conservative Senator Betty Unger told Macleans Magazine that she is “morally opposed. Period” to legalized assisted suicide and euthanasia, because of her Catholic faith.

Unger said she will propose “a couple of amendments” concerning “palliative care, and conscience rights for doctors, health care workers and institutions who don’t want to do this.”

But at the same time, she said, “There’s no amount of amendment that can make this bill better. There are some that can make it less harmful, but the basic premise of the bill is changing the Criminal Code to legalize assisted homicide, killing—whatever words you want to use.”

Conservative Plett said he couldn’t comment on how he will vote on the final version of the bill, but added that if Bill C-14  does not become “less restrictive, I might be inclined to vote for it, because I believe it’s better than not having anything.”

If the bill becomes “less restrictive, that will make the choice for me increasingly difficult,” Plett told LifeSiteNews. “This is the most difficult decision that I will personally have made in the Senate, when I stand up and vote either way on this bill.”

He is proposing two amendments to Bill C-14, one for conscience protection for individuals and institutions, and one explicitly excluding a beneficiary from helping someone commit suicide.

Dr. Jeff Blackmer, vice-president of medical professionalism for the Canadian Medical Association told Macleans Magazine that the Supreme Court’s eligibility criteria for euthanasia and assisted suicide is “quite vague.”

Physicians may be reluctant to kill people in this instance. “If they put a patient to death and someone takes them to court and the judge finds that this patient did not have the grievous and irremediable condition, then that physician is going to face jail time,” Blackmer said.