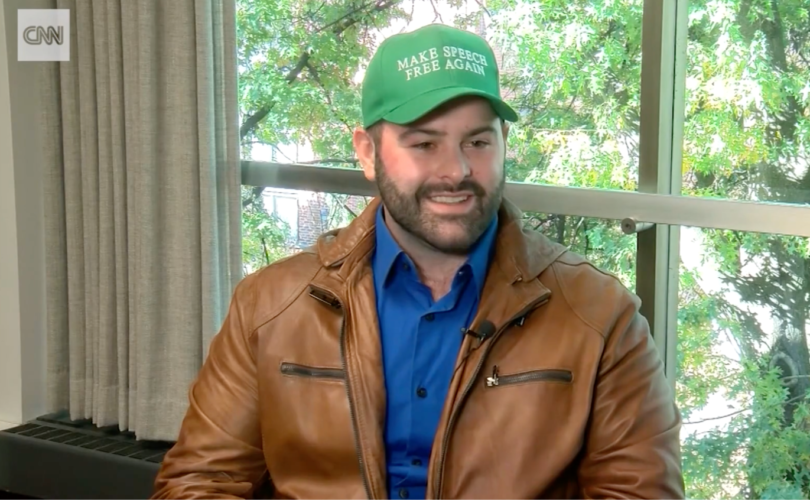 (LifeSiteNews) — A social network favored by conservatives because it stands almost alone in its dedication to defending free speech online is being threatened by the German government with fines and legal action in an effort to force the network to censor content the state deems to be “fake news.”

Gab CEO Andrew Torba on Monday published his response to the strong-arm tactics of the German authorities who seek to coerce Gab into compliance with the nation’s Network Enforcement Act, which Torba describes as “a draconian German law aimed at combating ‘fake news’ on social networking websites,” wryly adding, “‘Fake news’ is of course, whatever the German Government says it is.”

Thought Criminals who dare to dissent against their globalist regime

Gab has long drawn the ire of liberal elites who object to the network’s welcome of free, uncensored speech in the online public square. Unlike Facebook, Twitter, YouTube and other social media sites, Gab has steadfastly refused to knuckle under to government and media pressure to ban non-“woke” content.

“Because of Gab’s unwillingness to participate in State-mandated censorship of free speech, the German government is now coming after our bootstrapped tech startup with heavy fines and other legal action,” said Torba.

“Gab is not a lawless website,” he continued. “We have great relationships with many foreign countries who understand and respect our position on free speech and appreciate our zero tolerance for criminal activity. The German government isn’t concerned about any actual criminal activity, they are concerned with Thought Criminals who dare to dissent against their globalist regime.”

While legal advisors and others have counseled Torba to play it safe and simply stop providing their service in Germany by blocking German IPs, Torba said that strategy didn’t “sit right” with him.

“Ultimately as the CEO of Gab I alone need to make this decision. These are the types of decisions that define a man and make history,’ he explained. “If we block German IPs to appease the German government that sets a precedent that other countries will want to follow.”

“Why should we block an entire country from accessing Gab because their government is sending us fines we won’t pay and veiled legal threats that mean nothing to Gab as a US corporation?” he asked.

The reality is the German government has zero authority or jurisdiction over how we operate Gab. We have no corporate entity in Germany, we have no employees in Germany, and we are not German citizens. We are Americans.

In America you play by our rules, we don’t play by yours. Germany is a guest in our community and they will respect our values and way of doing things, not the other way around. I have nothing but love for the German people and they too deserve the fundamental human right to speak freely on the internet.

Our mission is to defend free speech online for all people, everywhere. Including in Germany. We will continue to do that, regardless of any threats from foreign governments. If we bow to Germany today, what’s to stop us from bowing to literal tyrants, such as those in Russia (like Google and Apple did just last week) or China (as Apple has done for years)?

“I’m not sure what will come of this decision, but I will not make an important choice like this from a position of fear,” declared Torba. “I leave the outcomes of this decision in the hands of God Almighty and I pray that the German people will take back their country and freedoms very soon.”

Torba, who as a public figure has never failed to describe himself as a Christian and who often quotes Scripture in his communication with the Gab community, signed his letter, “Only Jesus Saves,” an extreme rarity in the “woke” tech universe.

Why the ruling class hates Gab

Gab was founded in 2016 by Torba, who left Silicon Valley to start the social network site after he witnessed the rise in censorship from Big Tech platforms during the 2016 election.

During its relatively short life, Gab has been “relentlessly smeared by Big Tech, the mainstream media, academics, members of the U.S. Congress, and more for refusing to censor first amendment-protected political speech,” notes Gab.

Leftist media have tried to taint Gab as a racist, antisemitic, white nationalist, and hate-inciting network because — unlike other social media — Gab does not censor non-criminal content.

“The ruling class elites of the Globalist American Empire attack Gab endlessly,” said Torba in April, because “they do not control the information that millions of people see on Gab and it drives them absolutely insane. When they learned that they could not control Gab, they were set on destroying us and have been trying to do so for years now.”

The interests of these elites “are not in serving you, in serving God, or in serving our country,” said Torba. “Their interests are wicked and anti-human. Ultimately they are on a path to become immortal ‘gods’ themselves as we rapidly approach a ‘post-human’ world with the rise of transhumanism. Your time, data, and money are a means of control to their self-interested ends.”

As a result of its free speech principles, Gab has been deplatformed and banned by 25+ service providers over the years, including both app stores, payment processors, hosting providers, and VISA.

The woke American Regime will consume itself

“The Internet is an amazing innovation. It was the world’s first ‘decentralized’ communication system,” said Torba. “The Internet was designed to combat censorship. It was designed to withstand the forces of onerous governments and corporations. But as the Internet matured, the limits of its initial design are becoming obvious.”

“The free and open Internet has become increasingly controlled and closed by a handful of elites in Silicon Valley,” noted Torba. “The freedom brought to us by the Internet, and the economic expansion it offers, is under threat.”

While Gab faces what seem like insurmountable odds from its powerful detractors, Torba offers a message of hope.

“They want to gaslight us into violence. Don’t fall for it,” wrote Torba in a July 4 Gab post. “We are going to sit back and watch as the woke American Regime consumes itself. While this happens we are going to peacefully build.”