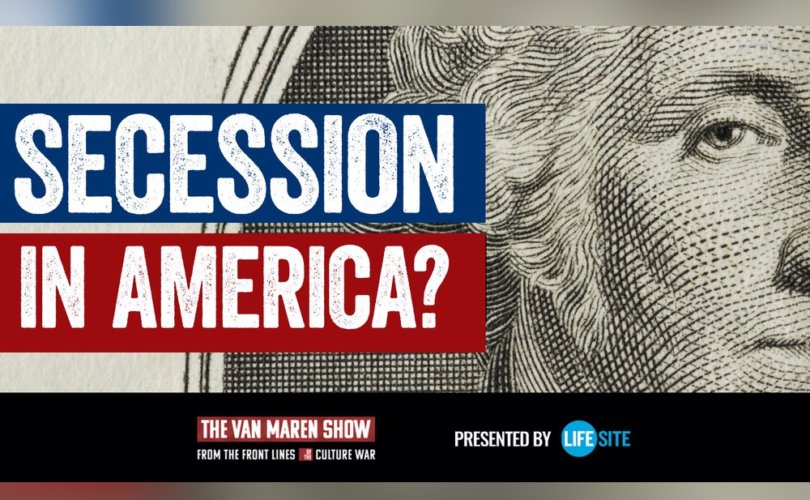 In today’s episode of The Van Maren Show, FH Buckley joins Jonathon Van Maren to discuss the current political situation in America and how secession could be looming on the horizon. Buckley’s newest book, American Secession: The Looming Threat of a National Breakup, explains how the current division and high tensions Americans face might just culminate in something we haven't seen since the civil war.

Buckley, originally born in Canada, teaches at George Mason University School of Law and has authored numerous books on government, law, and politics.

Buckley and Van Maren discuss the current state of American politics, which could make the United States ripe for secession pending the results of this year’s presidential election. In 2008, when Obama was elected, there was talk of a Texas secession. In 2016, when Trump was elected, there was chatter about California seceding. Yet, it was just talk, nothing more.

What makes 2020 different? According to Buckley, if Trump wins a second term it will change the way the left views the political landscape. Currently, the left thinks they control the government, the media, and the entire U.S. and that Trump’s first election was just a fluke.

“Conservatives are pretty good about sucking things up. We sucked things up in 2008 when Obama was elected. These guys on the left have thinner skins and they don't suck things up,” Buckley tells Van Maren.

If Trump wins again the left can no longer hang onto the illusion of control. Instead, they will seek more serious changes to keep their power – likely secession, according to Buckley.

“There are really two Constitutions. There is a conservative Constitution which goes back to the framers and then you have a liberal Constitution, which means by any means necessary. Right. So if the Constitution gets in the way, we’re not going to be able to amend it. But somehow let's try to do a work around,” Buckley says.

If/when the left returns to power, Buckley foresees them stacking the courts to tighten the left’s control over politics.

As the left loses control of universities, education, and the media in general, Buckley sees the most logical step for the left to be to secede.

Buckley argues that this may not be as terrible as it sounds. Smaller countries, Buckley claims, are better able to serve their citizens than larger countries.