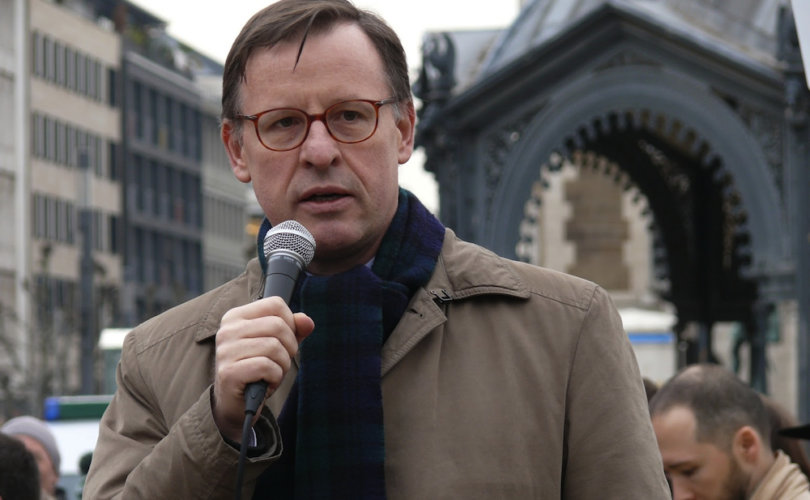 October 31, 2016 (LifeSiteNews) — On Sunday in Wiesbaden, Germany, more than 2,000 parents demonstrated against the new education plan in schools. The Christian Democratic Party (CDU) approved a sex education program that would introduce mandatory gender theory across all school topics in the state of Hessen.

Mathias von Gersdorff was one of the initiators of the demonstration. LifeSiteNews had the chance to interview him about his activism in the defense of family and the right for parents to educate their children.

LifeSiteNews: Could you please briefly introduce yourself? What led you to become active in fighting for the family and against gender ideology?

Mathias von Gersdorff: I became an activist in 1990. Back then, I had been sent by an American bank to work in Frankfurt and soon after got to know a brand-new pro-life initiative called “SOS-Life” (SOS-Leben). This enterprise was born out of the German Association for Christian Culture. After the unification of the German Republic and the DDR, no combined nationwide agreements could be reached regarding abortion; therefore, the German Parliament decided to develop a new edition of Law §218 of the StGB (German Constitution). In the DDR this was perceived as a “Fristenlösung” (law permitting an abortion within the first three months of pregnancy), which was implemented in the West by pretty restrictive regulations dependent on indications of the given case. It seemed restrictive judging from modern criteria – it was actually pretty loose in application.

This time left its mark on me. Experience through decades of hefty fighting for the right to life turned out to be very useful for the founding of the initiative “Children in Danger” (Kinder in Gefahr) originally conceived as an TV campaign and an organized protest with postcards against pornography and violence on TV. In due time, we picked up more and more themes as protests against blasphemy, homosexual partnerships, and Christo-phobia in some media were added. In recent years, initiatives against the implementation of gender theory in school education were added.

LifeSiteNews: Gender theory in school: Can you tell us what kind of plans or projects exist in this matter in Germany?

Mathias v. Gersdorff: “Gender” for the longest time was a doctrine which creeped through universities and was not of interest to the general public. That changed suddenly when a draft from the Baden-württembergischen ministry for culture was published called “Bildungsplan 2015” (“2015 Education Plan”) in the fall of 2013. Better put, it was “leaked” to the public, since back then the green-red government of the state had no intention of making this paper accessible to the general public. In the newly drafted and all-encompassing document on sex-ed, the topic of sexuality was intentionally given a gigantic role. The aim to achieve acceptance for all sexual orientations with all students. And that meant in all school subjects for all ages!

The public was shocked to such a degree that protests ensued immediately. The most important one was probably an online petition initiative by the teacher of the “Realschule” (secondary high school), Gabriel Stängle, and which collected about 200,000 signatures – a great number for Germany. The 2015 Education Plan polarized the Federal Republic. Since the protests did not ebb out, the government of the state deemed it necessary to release a heavily edited educational plan in which the question of gender was theoretically still implemented in all subjects. In practice the way in which the gender question was to be handled was supposed to depend on the parents and teachers.

Obviously, the discussion did not end there. In the other states, gender theory is being pushed into schools one way or another. Their obstinacy is admirable.

Whoever followed up with the pedagogical scientific literature would not have been surprised. The introduction of gender theory was prepared long and well in the pedagogical faculties before it could be introduced into everyday school life. Gender is – from a pedagogical point of view – a sub-segment of the so-called “deconstructive pedagogy.”

LifeSiteNews: What is “deconstructive pedagogy”?

Mathias von Gersdorff: “Deconstructive pedagogy” is a pedagogical approach which radically puts into question opinions, habits, and values. All these topics are reproached with the argument that they are constructed by family, society, or culture. Therefore, they are ultimately arbitrary, despotic, or discriminatory. Also views on sexuality and gender are put into question: Do men and women really exist? Has not every man female characteristics and every woman male ones? etc. Basically everything what you already know about gender theory.

But “deconstructive pedagogy” goes much further. It puts into question everything which is constructive for personality and identity. Basically it negates the fundamental features set in one’s  own personality. For these thinkers the individual is a kind of fluidum between diverse forms of being. These are not predetermined by nature but the effect of one’s own opinions, culture, etc.

LifeSiteNews: How do you assess the participation of Catholic bishops in public discourse? Are they aware of the danger?

Mathias von Gersdorff: The majority of bishops in Germany do not dabble in this and pretend that gender theory does not even exist. The fact that the Pope, the bishops’ conferences of Spain, Portugal, Slovakia, Poland, Triveneto and others have criticized gender sharply does not touch them in the least, evidently.

This stance causes much worry since gender ideology does find sympathy amongst Catholics who are modern minded. Already multiple associations such as Caritas, the Social Service of Catholic Women, and United German Catholic Youth (BDKJ) have already introduced (mostly relativized) modifications of gender in statements and programs. They probably find it hip to go with the times.

LifeSiteNews: What is the contribution of the Christian Parties (CDU) in this debate?

Mathias von Gersdorff: The stance of the CDU is more than regrettable. In Sachsen-Anhalt and Hessen, educational programs were approved which contain gender ideas. In Bavaria, the draft has been presented but is still under discussion.

The case of the CDU in Hessen is especially regrettable. A couple weeks ago, the minister of culture approved an “educational plan for sexual education” which introduces gender theory in all subjects for children from six years of age onwards. Among other things, children should be educated in the “acceptance of sexual diversity” and teaching content should include the likes of “children’s sexuality,” “alternative forms of partnerships,” “support for students with their coming out,” and so forth.

In Hessen, a coalition of CDU and the Green party currently rules. But within the shared governance, the educational politic was entrusted almost wholesale to the CDU. That means that this party cannot even say that her actions were necessary made through a coalition with the Green party (which would not be a justification in the least, regardless!).

Luckily, protest initiatives were organized quickly, also among them my initiative, Children in Danger. On October 30, a demonstration is planned in Wiesbaden, the state’s capital, organized by the association “Demo für alle,” with which my initiative joined.

Still, many common people are consternated and shocked. That the CDU violates in such a brutal way the interest of parents – the sex-ed downright stomps on the right of parents to educate their children – nobody expected, even in the recent past.

The only thing that remains is for parents and the initiatives of parents to go on the barricades to fend off this massive attack on their children.

LifeSiteNews: Is there a way for parents to protect their children from these topics in school? Exemption of sex education? Homeschooling like in other countries?

Mathias von Gersdorff: That is the problem. No. All attempts to free children from content of that sort in their schooling has failed in court. Homeschooling has been forbidden in Germany since the Nazis. Germany is practically the only country in Europe in which parents cannot educate their children at home. This situation is scandalous and understood as despotic and unfair — justifiably — by many Christian-conservative parents. In fact, the only way out is to leave for France, Austria, etc. It is incomprehensible that a country which counts itself as liberal holds up a status quo like that.

LifeSiteNews: How is Pope Francis perceived in all of this among the Catholics and among the secular society?

Matthias von Gersdorff: Regarding gender theory, Francis is seen as conservative. Indeed, he has made some very critical remarks in the past. He talked of ideological colonization.

But to come back to the German bishops: merely the worry of parents warrants that bishops take energetic steps against gender ideology. But with exception of Bishop Voderholzer of Regensburg, the protest against gender indoctrination in schools is lacking.

LifeSiteNews: What is the best antidote today and have you heard of success in the struggle against the gender ideology?

Mathias von Gersdorff: In talks and other meetings I very often come to the same conclusion: Many don’t know what gender theory even is. They find the critique of it excessive, as if to say: “That cannot even be real!”

That is why I cite many passages from authors in question, like Judith Butler, or authors of the “deconstructive pedagogy.” Then the audience understands very quickly the extent of the revolution which is underway and unfolding. It is truly an “anthropological revolution” as described by Pope Emeritus Benedict XVI.

This enlightenment on gender ideology must find political and public forms of conversation in different protests such as demonstrations on the street, postcard petitions, personal protests against politicians, and so forth. The possibilities are endless. Seeing the situation you get the impression that a “hidden agenda” is being pushed through with a crowbar. The only counter-measure is the mobilization of public opinion and protests; other things are not possible.

But we are also involved in a spiritual battle. Gender theory according to my opinion is a symptom of a deep sickness of the soul that is a crisis of faith. Only a society which does not have faith, and which does not believe in God and the fact that He is the creator of all, can open her heart to such mad ideologies. What we need most is mission and conversion.