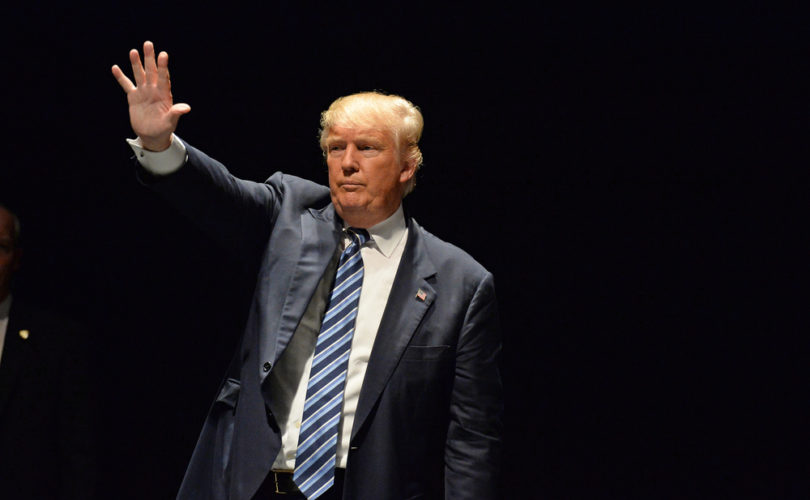 PHOENIX, March 23, 2016 (LifeSiteNews) – Donald Trump continued his march toward the Republican presidential nomination last night, winning the largest prize in the evening's primaries. Meanwhile, Senator Ted Cruz is collecting endorsements and campaign funds while maintaining he still has a viable path to the nomination.

With most of the votes counted, Trump won all 58 delegates at stake in Arizona's primary and beat Sen. Cruz by 23 percentage points.

Mr. Trump was already significantly ahead in the immigration-conscious state and had the endorsements of popular Maricopa County Sheriff Joe Arpaio and former Governor Jan Brewer, both of whom suffered public harassment at the hands of the Obama administration for insisting on tighter border security.

However, this week's terrorist attack in Brussels highlighted Trump's proposal to suspend all Muslim immigration to the United States until enhanced security systems can screen out potential jihadists.

Meanwhile, Sen. Ted Cruz won Utah's 40 delegates in a landslide, earning more than two-thirds of the vote. Trump garnered a rare third place finish in the conservative state, behind Ohio Gov. John Kasich. Cruz had the support of the state's most prominent public officials, including fellow Sen. Mike Lee, Gov. Gary Herbert, and Salt Lake City-area resident Mitt Romney, who recorded a series of videos telling voters, “At this point, a vote for John Kasich is a vote for Donald Trump.”

The Kasich campaign cried foul, noting that Romney endorsed Gov. Kasich and campaigned for him before the Ohio primary, which Kasich won, calling the Ohio governor the only candidate in the GOP race “with a real track record.”

The results make Trump the most likely Republican presidential candidate. The billionaire real estate developer has already racked up 739 delegates, according to the Associated Press – 60 percent of the 1,237 delegates he needs to clinch the nomination. Sen. Cruz is a distant second with 465. John Kasich trails Marco Rubio in delegates and has no mathematical way to secure the nomination outright before the convention.

Yet the Cruz campaign continues to earn endorsements, including that of former rival Jeb Bush, and raised $12 million in February.

And the campaign insists publicly that it can win the nomination outright. Chris Wilson, Cruz’s research director and pollster, told Politico earlier this month that he needed to narrow the field to a one-on-one fight with Donald Trump. “All we have to do in a two-person is…win 55-44″ to win the nomination on the first ballot in Cleveland. But Wilson acknowledged that model was premised on Sen. Cruz winning Arizona – something he would not have done even if he won 100 percent of Governor Kasich's vote.

However, Cruz would have narrowly won had he collected all the votes of Kasich and the 13 percent of the vote that went to Marco Rubio, who is no longer in the race but has yet to endorse anyone. According to some reports, donors are pressuring him not to endorse Cruz.

Cruz now needs to win approximately 91 percent of the remaining delegates as the primaries turn toward Trump-friendly territory in states like New York, New Jersey, Connecticut, and Pennsylvania. He hopes a strong showing will put him in first place before this summer's Republican National Convention.

Gov. Kasich is staying in the race, with his chief campaign strategist John Weaver calling him “the key” to preventing Trump from securing 1,237 delegates. The governor, he said, will play better in the Northeast, where he has won delegates in the past.

Many in the Republican Party hope for a contested or brokered convention, in which no nominee has enough delegates to be nominated on the first ballot in Cleveland. That opens the proceedings for party bosses to nominate a “consensus” candidate of their choosing, with possible names including everyone from Kasich, to Jeb Bush, to Romney or House Speaker Paul Ryan.

Most projections show, absent a sea-change in the three-man race, Trump arriving at or near the 1,237-delegate threshold before the convention.

The notion of the convention imposing an outside candidate on the party infuriates some activists. Former Pat Buchanan adviser Paul Nagy told The Daily Caller he has launched a petition warning the GOP, “Let it be understood that if Jeb Bush, Ted Cruz, John Kasich, Mitt Romney and the Republican Party power brokers steal the Republican nomination from Donald Trump at the convention — when Trump is the clear leader — we will walk out of the Republican Party and not support its nominee.”

The next Republican contest is the Wisconsin primary on April 5.

Super Tuesday: Trump extends his lead, but race isn’t over yet

Donald Trump wins Nevada caucus, dominating every group of voters except one