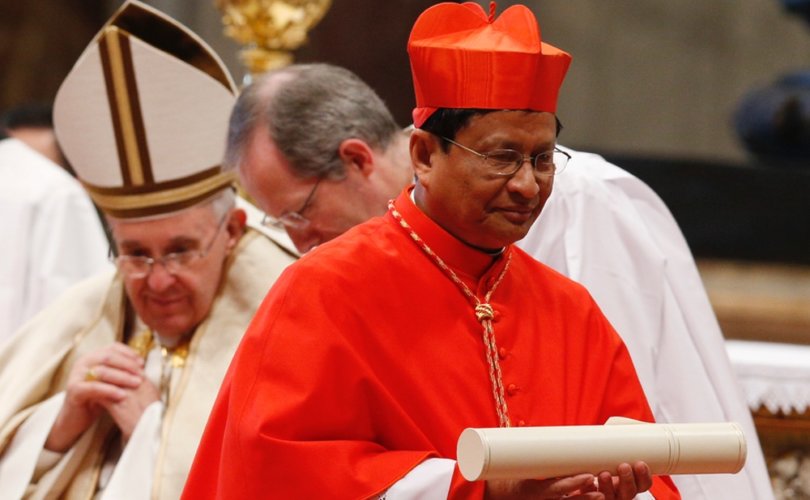 “Today we find ourselves faced with an ecological holocaust,” said Cardinal Charles Bo, Archbishop of Yangon, during a pre-Lenten speech at a conference for religious held in Yangon.

“It is a very serious moment. Pope Francis has raised a great shout against this impending disaster when talking about modern sins, the 'ecological sin' made individually and collectively by humans who destroy Mother Earth,” he added.

As a remedy to this so-called man-made ecological disaster, the Cardinal calls the faithful of Asia and Oceania to “reinvigorate a prophetic leap and become missionaries of mercy for the promotion of a just ecology.”

He goes on: “Avarice has caused an ecological terrorism against mother earth. Climate change is real and planet earth is heating up, causing thousands of ‘ecological refugees.’”

The Cardinal’s comments are contemporaneous to the Vatican’s conference on “Biological Extinction” happening February 27-March 1. The conference addresses what the organizers call “an unsustainable imbalance” between the world’s population and the earth’s resources.

In his four years as pope, Francis has given unprecedented focus to political causes such as combatting climate change and reordering the world’s economic system. Last September he called Catholics to have an “ecological conversion” and to repent of “sins” against the environment.

It comes as no surprise therefore to see Bo, who was made a cardinal by Pope Francis in 2015, focusing on the “environmental sins” of his country in his pre-Lenten speech. This admonition comes despite Myanmar’s raging conflicts involving child soldiers, forced slave-and-child labor, systematic sexual violence, human trafficking, the genocide of the Rohingya people, surrogate motherhood, and the abortion crisis.

“The greenhouse gasses that increase global warming are emitted by rich countries. The United States, with a population of about 6% of the world, produces 40% of greenhouse gasses. Who is dying? The poor. Poor countries are the most vulnerable to global warming. Cyclones, earthquakes, and floods create thousands of victims of natural disasters. This is ecological terrorism. The powerful of this world decide who should live or die. The economic and ecological terrorists are unleashed against the poor,” he said.

Despite Pope Francis’ assurances that the “ecological crisis is real,” unbiased science indicates that there is more 'tampering' than 'temperature' in the field of climate change.

Carleton University professor Michael Hart described in his 2016 book Hubris what he called the “poor science” behind climate change that is used by activists to push an agenda.

Hart made the case that “climate change” has become the Left’s new Trojan horse for ramming through their social agenda on an unsuspecting population.

Hart quoted philosopher of science Jeffrey Foss whom, he says, sees how environmental science has become the new religion with its own god, its own unique sins, and its own ultimate solution.

“Humanity has broken its pact with nature,” Bo states, “and that's why it is a profoundly moral issue, an ecological original sin, which needs an ecological conversion and an ecological evangelization.”

“Repent, God's creation is in danger. Your life changes will save the planet,” he said.